The Olde English Bulldogge is a purebred breed of dog. It is a re-creation of the bull-baiting dog that existed in England during the English Regency period of 1811-1820.

The Olde English Bulldogge is a muscular, medium sized dog of great strength, stability and athleticism. It is well balanced and proportioned with no exaggerated features. It has the appearance of a dog capable of doing its original job of bull baiting. Excessive height would have been detrimental for the old working bulldog as it had to “play low” to avoid the bull’s horns and fasten onto its nose. A heavyweight dog would also have been at a disadvantage, as the bull’s nose would have been likely to rip sending the dog flying.

The disposition of the Olde English Bulldogge is confident, courageous and alert. Olde English Bulldogges are very friendly and loving. They are extremely strong and occasionally display same-sex dog aggression, so socialization and obedience training are important. It is best to channel high energy dogs to some type of work and exercise.

The Olde English Bulldogge may be a healthier breed of dog than many modern bulldog breeds, though they can be affected by many of the same disorders that occur in any breed. Many breeders are now x-raying hips to reduce the incidence of hip dysplasia as well as having dogs evaluated by organizations such as the Orthopedic Foundation for Animals (OFA) and the University of Pennsylvania Hip Improvement Program (PennHIP). When considering buying a puppy it is important to ask about health testing that has been done for both parents of a litter to better evaluate if the dog can be expected to grow up free of health issues. The Olde English Bulldogge is also quickly becoming well respected in many working venues such as weight pull, therapy training, obedience and several others. They have become excellent breathers and do not have to be kept in an air conditioned environment on hot days. Artificial insemination is not a standard protocol when breeding Olde English Bulldogges; natural ties are the standard. Caesarean sections are only needed in the event of unexpected complications at delivery like with almost any breed of dog. Breeders from the breed's Parent Club, The Olde English Bulldogge Kennel Club, Inc., are working vigorously on educating new breeders among the breed on genetic disorders and the benefits modern genetic testing for these disorders can have on preventing genetic disorders in domestic animals. Many breeders are also becoming more aware of how important selective breeding can be to the breed as a whole.

Bull baiting dogs, referred to today as bulldogs, were bred to bait animals, mainly bulls and bears. Baiting sports, often referred to as "Blood Sport", were extremely popular from their inception around the 12th century until they started being banned across Europe in 1835[1]. During "Bull-baiting" the dog would attempt to flatten itself to the ground, creeping as close to the bull as possible, then darting out and attempting to bite the bull in the nose or head area. The bull would often be tethered by a collar and rope which was staked into the ground. As the dog darted at the bull, the bull would attempt to catch the dog with his head and horns and throw it into the air. The dog owners would often try to catch the dog before it fell to the ground to minmimize the dogs injuries so that the dog could continue tormenting the bull.

In 1835,[2] the Cruelty to Animals Act was passed in Parliament that outlawed "Blood Sport" in Great Britain. The bulldog's work was suddenly over and the bulldog rapidly started dying out. Around 1865 dog fanciers began developing dog clubs which eventually culminated into conformation shows. Many fanciers utilized various remnants of the dog utilized for "Blood Sport" to resurrect the "Bull" dog and ultimately developed today's modern English bulldog.

History of the Olde English Bulldogge 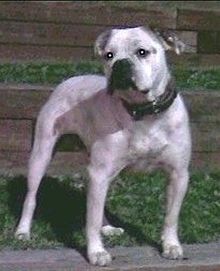 There are many registries in the US and abroad that claim to register purebred Olde English bulldogges. However, if a dog's pedigree can not be traced back to the breed's original foundation stock, the dog being registered can not be ethically registered with The Olde English Bulldogge Kennel Club, The Canine Developmental Health & Performance Registry (CDHPR) or The American Rare Breed Association[citation needed]. The breed is not recognized by the American Kennel Club.