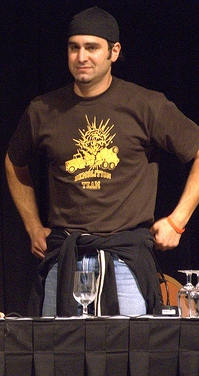 Salvatore "Tory" Belleci (born , in ) is a film maker and model maker. He is best known for his work on the television program "". He has also worked with on films such as ' and '. The Federation battleships and podracers are some of Tory's pieces. He attended . Tory worked on the "Matrix" trilogy, "Van Helsing", "Peter Pan", "Starship Troopers", "" and "Bicentennial Man".

He is often considered by fellow MythBusters and to be more of a daredevil and as such often performs the more dangerous stunts when testing a myth. These have included testing the Red Flag to a Bull myth and testing the myth that a human's tongue will instantly stick to a frozen pole in the Snow Special Episode. As a result of this, he is often involved in comical accidents while testing myths, although none to date have caused lasting injuries.