The argument from morality is one of many arguments for the existence of God. It comes in different forms, all aiming to support the claim that God exists with observations about morality. Its counterpoint is generally the Problem of evil.

All forms of the moral argument begin with the premise of moral normativity, that is, that well-functioning human beings are typically aware of actions as being right and wrong. Furthermore, this awareness binds them to certain obligations, regardless of their personal goals and ends. In this sense, moral qualities have the appearance of objectivity: many times, when someone says "I ought to do a" they do not mean the same as "I would like to do a", or even prudentially, "I ought to do a in order to produce so-and-so". Another aspect of this is that a proposition such as "torturing babies for fun is wrong" is generally regarded as a statement of fact, a position known as moral realism.[1]

In its most general form, the moral argument is that:

What follows are some of the more common variations of the moral argument.

One may ask why the required recognition and upholding of moral norms must be carried out by divine intelligence, as opposed to human intelligence. Alfred Edward Taylor explains that the moral law holds at all times and everywhere, whereas the human mind is limited in its comprehension and scope. Only a sovereign God could properly detect infringements of the moral law and apply sanctions. In his Letter concerning Toleration, John Locke contends that one of the few religious stances that the commonwealth cannot tolerate is atheism; atheists, Locke says, have no motive to act upon their promises and oaths when doing so is against their self-interest.

Here, a transcendental fact is one that cannot be stated entirely in the language of the natural sciences, and that is true irrespective of human opinion. Theism provides the most intelligible explanation for such moral facts via the notion that rightness is one and the same property as the property of being commanded by God (wrongness consists in being forbidden by God).

In order for this argument to work, it should be shown that a non-theistic worldview cannot adequately account for transcendental normative facts. 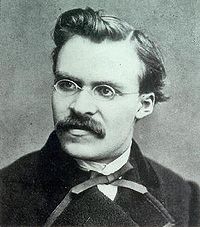 Friedrich Nietzsche presented examples of how he believed morality could develop without reference or need of God.

Critics suggest that this argument appeals to a divine command theory of ethics. Objections to divine command theories of ethics are numerous, most stemming from forms of the Euthyphro dilemma. Is an action good because God commanded it, or did God command it because it is good? The first horn would imply that what is good is arbitrary; God decides what is right and wrong in the same way that a government decides which side of the street cars should drive on. The second horn could imply that God made his commands in accordance with transcendental facts that exist apart from God — exactly the types of facts that the theist is asking the non-theist to provide an account for. The argument is thus turned over on its head: the theist must account for the existence of these transcendental facts without invoking God. The non-theist can thus recognize the transcendentality of moral facts and yet still reject premise (3) on the basis that a theistic hypothesis still leaves transcendental moral facts unexplained.

Proponents of the argument maintain that the Euthyphro dilemma can be adequately resolved. Thomas Aquinas, for example, explains that God indeed commands something because it is good, but the reason it is good is that "good is an essential part of God's nature". In other words, the definition of good becomes "that which is in God's nature".

However, critics respond that Aquinas' solution merely pushes the problem up one level, giving rise to a similar dilemma over what dictates God's nature. If God dictates his own nature (and therefore which things are good), morality again becomes arbitrary. If God can't control his own nature, then morality is again subject to some force external to God.

Friedrich Nietzsche suggests elaborate explanations of how initially amoral social practices became artificially colored with moral significance.[citation needed] Some thinkers like Richard Dawkins suggest that similar explanations of the phenomenon of morality are given through fields like Evolutionary dynamics - for example, research into the Evolution of morality. In fact, the Science of morality (based on the philosophy of Ethical naturalism) attempts to define right and wrong in empirical terms that allow for objective answers to be sought. 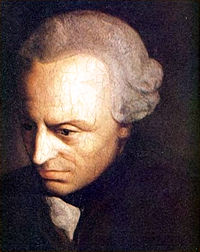 Immanuel Kant developed his own version of the argument from morality.

Premises (1) and (2) reflect Immanuel Kant's belief that behaving morally should lead to happiness. Premise (3) tells us that "ought" implies "can". It cannot be true that we ought to seek an end if there is no chance of our attaining it. Premise (4) points to the fact that the world as it appears to us is governed by morally blind causes. These causes give no hope whatsoever that pursuit of moral virtue will lead to happiness. They do not even give hope that we can become morally virtuous. Agency is beset by weaknesses that make the attainment of virtue — in the absence of external aid — seem impossible. The being postulated in (5) has omniscience and omnipotence combined with perfect goodness. Thus it will ensure that the pursuit of a virtuous state is possible through external aid (as in grace) and will promise an immortality where the moral journey can be completed. It will also ensure that in the long run happiness will result from virtue. Its existence would mean that there is a perfect moral causality at work in the world.

Kant himself asserts that if the summum bonum cannot be attained, then the moral law that bids us to seek it "must be fantastic and directed to imaginary ends and must therefore in itself be false". Critics[citation needed] point out a certain type of circularity: Kant's argument presupposes that both the pursuit of moral virtue and the pursuit of happiness must be rational enterprises; however, this is precisely the sort of thing that may not be true in a non-theistic universe. Kant's conception of God arises as an attempt to harmonize these two conflicting goals, but critics assert that practical reason is not committed to the pursuit of two ends that apparently conflict.

William Lane Craig put it thus in a speech:

This form takes Fyodor Dostoevsky's position expressed in The Brothers Karamazov that, "If there is no God, everything is permissible." as its first premise. Notably, Jean-Paul Sartre made an inverse form of this argument, taking the non-existence of God as a premise and logically deducing the non-existence of objective values.[4]