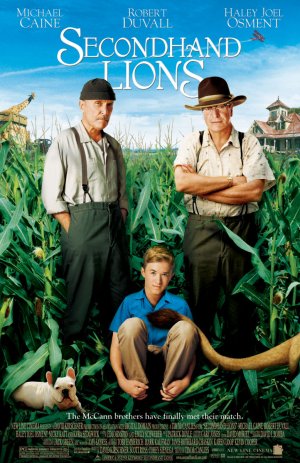 "Secondhand Lions" is a 2003 American adventure/ about a young boy who is sent to live with his two eccentric but mysterious great-uncles on a farm in the of . The movie was filmed in . This film was first released in the United States on , .

In the 1960s, Walter Coleman () is sent to live with his uncles by his mother (who claims she is going to go to court reporting school), so that he can find the fortune they have supposedly accumulated. When they first arrive, Hub and Garth McCann (, ) are knee-deep in their pond, shooting at bass with s. His cousins, also strong believers in the fortune, arrive a day after his mother leaves to ingratiate themselves into the good graces of Hub and Garth. They scare Walter away, and he runs to telephone his mother. He discovers that she is not actually enrolled at the school, but has lied &mdash; again.

With no recourse but to return to his uncles' farm, Walter eventually becomes used to their quirky, socially atypical mannerisms and they become used to him and his shyness. While encouraging them to eat vegetables and stop shooting at visiting salesmen, he becomes aware of his uncles' mysterious past. Garth reveals to him that he and Hub were adventurers beginning in .

Hub and Garth arrived in the day that invaded the country. Garth believed they should return home, but Hub proposed that they tour Europe just ahead of the invading armies. On their last night in France, after enjoying the local nightlife in s with two French soldiers, they find themselves on a , conscripted into the . The two brothers fought in many battles, and Hub saved Garth's life several times, in many different battles.

Following their Legion service, Garth became a guide in , while Hub helped anybody who deserved it. Hub became mutually attracted to Jasmine (), a beautiful princess and an expert horsewoman, who decided to meet him after he rescued her servant from slavery. She, however, was doomed to be an evil sheik's wife. Hub rescued Jasmine from the sheik, who then put a price of ten thousand gold pieces on Hub's head. Garth, disguised as a , turned in Hub for the reward, whereupon Hub escaped, having won a 's victory from the sheik. Hub's parting words to the sheik were "Twice I've held your life in my hands, and twice I have given it back to you; the next time, your life is mine." He earned the other man's respect and a great deal of his gold. Later, the sheik made his fortune in trade of rock oil.

Meanwhile, Hub, Garth and Walter have adventures of their own. They order an aging (from a Circus animal dealer), whom Walter adopts and names Jasmine, thereby keeping Hub from killing her. Hub and Garth frighten off Walter's cousins and purchase a clay pigeon thrower, a succession of ever-larger s, and a . Hub gets into a fight with several Greasers within an hour after having a heart attack, wins the fight, drives them back to the farm, then feeds them (after hunting for the Lioness, which escaped), and gives them a lecture on what it means to be a real man.

Walter subsequently finds that his uncles have been hiding their money in a room beneath their barn.

Fresh from Las Vegas (where she had been instead of at the school), Walter's mother and her current suitor, a drifter calling himself a 'detective', arrive at the farm and demand to know where the money is. The suitor tells Walter that Hub and Garth actually were bank robbers, that Jasmine was their accomplice, and the fortune is for the taking. Walter decides he will believe in the tales of his uncles, and the man begins to beat Walter. Jasmine (the lion) attacks the false detective and seriously wounds him, and although the lioness dies of a heart attack in the process, she arouses enough noise to attract the attention of Hub and Garth. Walter holds Jasmine's head in his lap and says, "She was a real lion, wasn't she? There at the end. A real jungle lion. A real Africa lion." They then proceed to bury the lion in the garden they worked on together.

Walter is taken away by his mother, but he decides to return to his uncles' house after she informs him she has no intention of leaving the man who nearly beat her son unconscious. He lays certain conditions on Hub and Garth: that they eat more vegetables and stop their dangerous pastimes until Walter graduates from college. Hub replies, "What do you want us to die of? "Old age"?"

Several years later, Walter (now a successful whose ""-like strip is based on his experiences with his uncles. The strip is actually drawn by , creator of "Bloom County".) comes back to learn that his uncles have flown their biplane into their barn and died. The who informs Walter of his uncles' demise passes their will to Walter.

While Walter reads the will ("The kid gets it all. Just plant us in the damned garden with the stupid lion.") and laughs to himself about his uncles' unique approach to life, a touches down and a ern man steps out. He explains that, while in tending to his oil interests, he saw news of the men's deaths and their names on and thought they might be the two courageous Americans that his grandfather (the sheik) had told him about long ago. Walter says that, yes, they were, and the two are happy to realize that the stories which had inspired them for so long were true -- that the two men "really lived".

In an alternate (or extended) ending to the movie, instead of the sheik's grandson, a tractor-trailer pulls up at the gravesite and a detachment from the rides out on horseback and act as an . Shortly thereafter, the sheik himself, now wheelchair-bound and elderly, arrives in a limousine surrounded by his to pay his respects. The four that Hub beat up also make an appearance at the funeral, showing that Hub's speech did have an impact, as the men are now mature and respectable.

The was composed by and features music by The Slovak Radio Symphony Orchestra, Ona Onabule, in addition to .