Ni'lin (Arabic: نعلين‎) is a Palestinian town in the Ramallah and al-Bireh Governorate in the central West Bank, located 17 kilometers (11 mi) west of Ramallah. Ni'lin is about 3 kilometers (1.9 mi) east of the 1949 Armistice Line (Green Line) bordered by Deir Qaddis, the Israeli settlements of Nili and Na'ale to the northeast, the village of al-Midya and Modi'in Illit (Kiryat Sefer) settlement bloc are to the south, Budrus (4km) and Qibya (5km) villages are located to the northwest. The town's total land area consists of approximately 15,000 dunams of which 660 is urban. Under the Oslo II 93.3% of town lands has been classed as 'Area C'.[3]

Most of the town's inhabitants rely on agriculture for income and prior to the outbreak of the Second Intifada, many had jobs in construction in Israel.[4] According to the Palestinian Central Bureau of Statistics, the town had a population of approximately 4,750 inhabitants in mid-year 2006.[5]

The residents of Ni'lin and international activists, have been staging weekly demonstrations against a nearby expansion of the Israeli West Bank barrier.[6][7] It has been estimated that the completion of the barrier will remove ⅓ of Ni'lin's land.[8]

In the first of escalating incidents at the anti-barrier protest demonstrations led to the fatal shooting of 10-year-old Ahmed Moussa on 29 July 2008.[9][10] The incident occurred when a group of mostly teenage boys had gone to the barrier construction site outside Ni'ilin, where there were no security personnel, the boys began removing razor wire.[11] A preliminary Israeli police probe has found that Israeli border policemen used live ammunition to disperse the group and that one of the bullets likely killed 10 year old Ahmed Moussa.[12] During the demonstration 15 others were injured by rubber coated steel bulets.[13] The funeral of Ahmed Moussa was marred by a distinct up-swing in violence. The permanent stationing of a Border Police force, ordered by OC Central Command Maj.-Gen. Gadi Shamni, on the outskirts of the village where the daily demonstrations are held, infuriated marchers in the funeral procession.[14] Yousef Ahmed Younis Amera, (18), was declared brain dead in a Ramallah hospital on Wednesday 30 July 2008 after being shot in the head with a rubber coated steel bullet and finally died on Monday 4 August 2008.[15][16] On the 5 August 2008 Israeli police said that they had detained a border policeman and placed him under house arrest in connection with the death of 10 year old Ahmed Moussa.[17]

In the second week of August 2008 Twenty-two unarmed civilians (including eight children) were shot with metal-coated rubber bullets at protests in Ni'lin and Bil'in villages (Ramallah).[18] Israeli forces in the occupied territories have begun using a new method of crowd control in Ni'lin. A mix of weak sewage water with animal manure and chemicals has been nicknamed "skunk", due to its powerful smell, the mix induces vomiting when sprayed on demonstrators.[19] 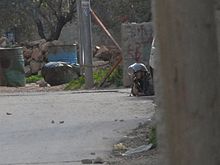 An Israeli soldier in Ni'lin on 6 February 2009

On 28 December, during a demonstration against the Israeli assault on Gaza that had started the previous day, Mohamed Khawaja (19) was shot in the head by the Israeli military, and Arafat Khawaja (22) was shot in the back. [20] Mohamed Srour was shot in the leg. Arafat died on the scene while Mohamed Khawaja was declared braindead in hospital and died on 31 December. [21] These incidents were brought to the attention of the United Nations Fact Finding Mission on the Gaza Conflict by witnesses Mohamed Srour and Jonathan Pollak at the Mission's Public Hearings in Geneva on 5 July 2009.[22]

The regular clashes here came more sharply into the international spotlight when an U.S. Citizen named Tristan Anderson, of Oakland, California was struck in the head by a tear gas canister fired by Israeli forces on 13 March 2009, during demonstrations against the barrier. The impact caused massive damage to Andersons frontal lobe, and to his eye. Even after several brain surgeries, the 38 year old Anderson is being kept in a medically induced coma in a Tel Aviv hospital.[23][24]

On 5 June 2009, Yousef Aqel Srour (36) was shot with 0.22 caliber live ammunition during a demonstration. He was pronounced dead upon arrival at a hospital in Ramallah.[25]

On 6 November 2009, activists marking the twentieth anniversary of the fall of the Berlin Wall managed to topple a small part of the wall that cuts through the village's land; the first time Palestinian demonstrators succeeded in toppling a part of Israel's concrete barrier.[26]

In March 2010, the Israeli army designated Ni'lin, (together with nearby village Bilin), as closed military area each Friday. This was to last until August, 2010.[27] 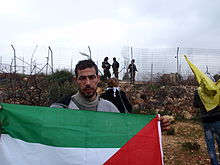 On 7 July 2008 A 17 year-old Salam Kanaan filmed an incident where an Israeli battalion commander (Lt. Col. Omri Borberg of Armored Battalion 71) is filmed holding a handcuffed and blindfolded Palestinian (Ashraf Abu Rahma of Bil'in) detainee's arm while the subordinate shoots the detainee in the foot.[28][29] A second polygraph test on Tuesday 29 July 2008 has cast doubts on the testimony of Lt. Col Borberg. After meeting with OC Northern Command Maj.-Gen. Gadi Eizenkot, Borberg agreed to take a 10-day leave of absence while IDF Judge Advocate-General (JAG) Brig.-Gen. Avichai Mandelblitt made the decision of whether or not to press charges against the battalion commander.[30] The Battalion commander was accused by the army of "severe moral failure", is to be reassigned to another post and will face the relatively minor charge of "unworthy conduct". Israeli human rights groups B'Tselem, Yesh Din, the Association for Civil Rights, and the Public Committee Against Torture have criticized the Israeli army's disciplining of Borberg as lenient and have asked the Israeli military Judge Advocate General suspend legal proceedings against both the lieutenant colonel involved and Staff Sergeant "L" who fired the shot to enable a challenge to be mounted against the decision to charge the two with the relatively light offense of “inappropriate conduct”.[31][32] The Ha'aretz editorial comments that:

The opportunity to send a message of total intolerance of shooting a person in shackles has been missed.[33]