Eye of the Beholder (film)

Eye of the Beholder (film) 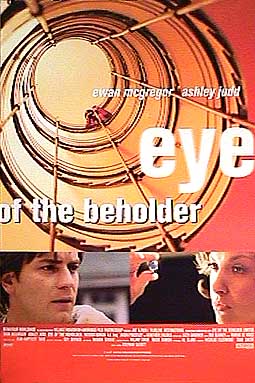 "Eye of the Beholder" is a thriller movie starring and , based on the of the same name by . It was written and directed by .

The Eye (McGregor) is an whose current assignment is to track down the rich socialite son of his boss and find out what trouble he has gotten himself into. This leads him to Joanna Eris (Judd), a who is in a relationship with the son, whom she murders. The Eye is a witness to the crime.

At the train station, where she commits another murder, he finally corners her and is about to call for backup. Instead of turning her in, The Eye, having gone through a messy in which he lost custody of his daughter, follows her in an effort to save her. He hallucinates constantly that his daughter is with him, and comes to think of Eris as a vulnerable, lost child.

The Eye follows her across the country and through several murders. He soon discovers that Eris and her father were and that he abandoned her, explaining her pathological hatred of men. When Eris helps a rich blind man () in an airport, the two become involved, fall in love and become engaged, and it looks like they might even live a happy life. The Eye, who has witnessed all of this, can not bear to let her go, and is willing to do anything to stop her from having a relationship with another man. While the couple is on the way to the chapel for the wedding, The Eye shoots a bullet in one of their tires and the car crashes, killing both Eris' fiancé and her unborn baby. After a stranger () forces Eris to inject when her car dies in the desert, Eris flees to , with the Eye on her trail.

In Alaska, The Eye gains the courage to ask Eris out, as he is a frequent patron of the diner at which she waitresses. They have a few drinks in the evening, both getting emotional, and Eris mentions where she would like to be buried when she dies. She then says she has nothing to give him, that she is empty, and that he should leave her alone. The next day the police, as well as Eris' psychiatrist (), come to the diner to arrest her. The Eye tries to save her, taking her to his trailer There she is horrified to find out that he has been following her. She shoots him, although only with a blank cartridge. She flees and he follows her on a motorcycle, where he catches up to her, and she realizes he is the "Angel" who has saved her from every tight situation she has gotten into. At this revelation she crashes the car. She tells him she knows him as her "Angel".

It is left ambiguous whether Eris actually dies. The US version has a different ending than the UK version, where The Eye is seen at the cemetery where Eris wanted to be buried.