Milton was born James Milton Campbell, Jr., in the Mississippi Delta town of Inverness and raised in Greenville by a farmer and local blues musician.[2] By age twelve he had learned the guitar and was a street musician, chiefly influenced by T-Bone Walker and his blues and rock and roll contemporaries.[2] In 1952, while still a teenager playing in local bars, he caught the attention of Ike Turner, who was at that time a talent scout for Sam Phillips' Sun Records. He signed a contract with the label and recorded a number of singles. None of them broke through onto radio or sold well at record stores, however, and Milton left the Sun label by 1955.[2]

After trying several labels without notable success, including Trumpet Records,[3] Milton set up the St. Louis based Bobbin Records label, which ultimately scored a distribution deal with Leonard Chess' Chess Records.[2] As a record producer, Milton helped bring artists such as Albert King and Fontella Bass to fame, while experiencing his own success for the first time.[2] After a number of small format and regional hits, his 1962 single, "So Mean to Me," broke onto the Billboard R&B chart, eventually peaking at #14.

Following a short break to tour, managing other acts, and spending time recording new material, he returned to music in 1965 with a more polished sound, similar to that of B.B. King. After the ill-received "Blind Man" (R&B: #86), he released back-to-back hit singles. The first, "We're Gonna Make It," a blues-infused soul song, topped the R&B chart and broke through onto Top 40 radio, a format then dominated largely by white artists. He followed the song with #4 R&B hit "Who's Cheating Who?" All three songs were featured on his album, We're Gonna Make It, released that summer.

Throughout the late 1960s Milton released a number of moderately successful singles, but did not issue a further album until 1969, with Grits Ain't Groceries featuring his hit of the same name, as well as "Just a Little Bit" and "Baby, I Love You". With the death of Leonard Chess the same year, Milton's distributor, Checker Records fell into disarray, and Milton joined the Stax label two years later.[2] Adding complex orchestration to his works, Milton scored hits with "That's What Love Will Make You Do" and "What It Is" from his live album, What It Is: Live at Montreux. He appeared in the documentary film, Wattstax, which was released in 1973.[4] Stax, however, had been losing money since late in the previous decade and was forced into bankruptcy in 1975.[2]

After leaving Stax, Milton struggled to maintain a career, moving first to Evidence, then the MCA imprint Mobile Fidelity Records, before finding a home at the independent record label, Malaco Records, where he remained for much of the remainder of his career.[2] His last hit single, "Age Ain't Nothin' But a Number," was released in 1983 from the album of the same name.[2] In 1988, Little Milton was inducted into the Blues Hall of Fame and won a W.C. Handy Award.[2] His most final album, Think of Me, was released in May 2005 on the Telarc imprint, and included writing and guitar on three songs by Peter Shoulder of the UK-based blues-rock trio Winterville.

The name 'Little Milton' was reused for Gerald Bostock, the fictional boy poet central to Jethro Tull's 1972 record Thick as a Brick.

Milton died on August 4, 2005 from complications following a stroke. 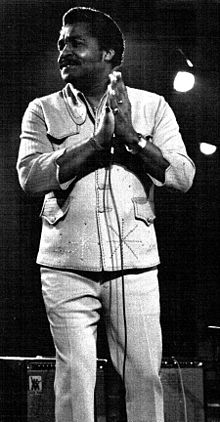 Appearances on other albums

"Any category they want to put me in is fine with me as long as they accept what I do." - Little Milton[5]