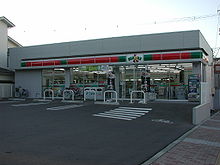 Sunkus and Circle K Japan formed an equity and business alliance in October of 1998.

The franchiser, Sunkus & Associates Inc. officially merged with Circle K Japan Co., Ltd. as of the September 1, 2004 fiscal year and is now officially Circle K Sunkus Co., Ltd (株式会社サークルKサンクス). The two brands remain separate - convenience stores owned by the company either have a Sunkus sign or a Circle K sign.

Derivation of the Sunkus logo