Colonization of the outer Solar System

Colonization of the outer Solar System

Some of the moons of the outer planets of the solar system are large enough to be suitable places for colonization.[clarification needed] Many of the larger moons contain water ice, liquid water, and organic compounds that might be useful for sustaining human life.[1][2] Colonies in the outer Solar System could also serve as centers for long term investigation of the planet and the other moons. In particular, robotic devices could be controlled by humans without the very long time delays needed to communicate with Earth. There have also been proposals to place robotic aerostats in the upper atmospheres of the Solar System's gas giant planets for exploration and possibly mining of helium-3, which could have a very high value per unit mass as a thermonuclear fuel.[3][4]

Orbiting colonies could exist around Jupiter, as around any body in the solar system, but artificial gravity (such as through rotation of the structure) would need to be employed. These bases would also need to withstand radiation from all angles. This type of structure could also serve as a dock for ships visiting other parts of the Jovian system. Additionally, science fiction writers have sometimes proposed that Jupiter could be the site of airborne colonies such as floating cities, assuming the radiation and gravity issues in traveling to and from the atmosphere are properly addressed. So far no serious proposals or studies have been made of such a colony within Jupiter's atmosphere. However, there does exist a depth within Jupiter's atmosphere at which the pressure is the same as Earth's at sea level, and where there is a blue sky, although it is colder than on Earth; further down, there is a location that has the same average temperature as the surface of the Earth, although the pressure is about five bars.[9]

One significant challenge to overcome in colonizing Jupiter would be the intense radiation in the planet's magnetosphere. 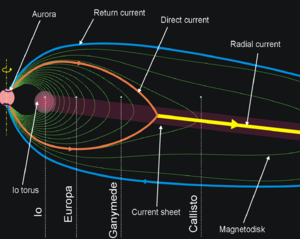 The magnetic field of Jupiter and co–rotation enforcing currents

The Artemis Project designed a plan to colonize Europa.[10][11] Scientists are to inhabit igloos and drill down into the Europan ice crust, exploring any sub-surface ocean. It also discusses use of air pockets for human inhabitation.

Ganymede is the largest moon in the Solar System. Ganymede is the only moon with a magnetosphere but it is overshadowed by Jupiter's magnetic field. Ganymede receives about 8 rem of radiation per day.[6]

Due to its distance from Jupiter's powerful radiation belt, Callisto is subject to only 0.01 rem a day.[6] NASA performed a study called HOPE (Revolutionary Concepts for Human Outer Planet Exploration) regarding the future exploration of the solar system.[12] The target chosen was Callisto. It could be possible to build a surface base that would produce fuel for further exploration of the solar system.

The 2006 announcement by the Keck Observatory that the binary Trojan asteroid 617 Patroclus, and possibly large numbers of other Trojan objects in Jupiter's orbit, are likely composed of water ice, with a layer of dust, suggests that mining water and other volatiles in this region and transporting them elsewhere in the Solar system, perhaps via the proposed Interplanetary Transport Network, may be feasible in the not-so-distant future. This could make colonization of the Moon, Mercury and main-belt asteroids more practical.

Robert Zubrin identified Saturn, Uranus and Neptune as "the Persian Gulf of the solar system", as the largest sources of deuterium and helium-3 to drive the pending fusion economy, with Saturn the most important and most valuable of the three, because of its relative proximity, low radiation, and excellent system of moons.[13]

Robert Zubrin identified Titan as possessing an abundance of all the elements necessary to support life, making Titan perhaps the most advantageous locale in the outer Solar System for colonization, and saying "In certain ways, Titan is the most hospitable extraterrestrial world within our solar system for human colonization."[14] A widely published expert on terraforming, Christopher McKay, is also a co-investigator on the Huygens probe that landed on Titan in January 2005.

The surface of Titan is mostly uncratered and thus inferred to be very young and active, and probably composed of mostly water ice, and lakes of liquid hydrocarbons (methane/ethane) in its polar regions. While the temperature is cryogenic (95 K) it should be able to support a base, but more information regarding Titan's surface and the activities on it is necessary. The thick atmosphere and the weather, such as potential flash floods, are also factors to consider.

On March 9, 2006, NASA's Cassini space probe found possible evidence of liquid water on Enceladus.[15] According to that article, "pockets of liquid water may be no more than tens of meters below the surface." If these findings are confirmed, it would mean liquid water could be collected much more easily on Enceladus than on, for instance, Europa (see above). Discovery of water, especially liquid water, generally improves a celestial body's consideration for colonization dramatically. An alternative model of Enceladus' activity is the decomposition of methane/water clathrates – a process requiring lower temperatures than liquid water eruptions. The higher density of Enceladus indicates a larger than Saturnian average silicate core that should provide materials for base operations.

Because Uranus has the lowest escape velocity of the four gas giants, it has been proposed as a mining site for helium-3.[4] If human supervision of the robotic activity proved necessary, one of Uranus' natural satellites might serve as a base. An alternative is to place floating cities in its atmosphere, as its surface gravity is only 90% of Earth's. Saturn and Neptune could be suitable as well, but Jupiter would likely not be, due to its high gravity, escape velocity, and radiation.

It is hypothesized that one of Neptune's satellites could be used for colonization – Triton's surface shows signs of extensive geological activity implying a sub-surface ocean, perhaps of ammonia/water.[16] If technology advanced to the point that tapping such geothermal energy was possible, it could make colonizing a cryogenic world like Triton feasible, supplemented by nuclear fusion power.

The noted physicist Freeman Dyson identified comets, rather than planets, as the major potential habitat of life in space.[17]

There are various difficulties in colonizing the outer solar system. They include: