Mary Elizabeth King (née Thomson, born 8 June 1961) is a British Olympic equestrian sportswoman who has represented Great Britain at five Olympics from 1992 to 2008, winning one silver and one bronze medal in the team eventing. She has won two gold and one silver medal in the World Equestrian Games team eventing and four team gold medals at the European Eventing Championships along with one bronze and one silver medal in the individual event. Nationally, she was the British Open Champion in 1990, 1991 & 1996 and won the CCI four star Badminton Horse Trials in 1992 & 2000, and the CCI four star Burghley Horse Trials in 1996. [1][2]

King was born in Newark-on-Trent. Her father, Lieutenant-Commander M D H Thomson was a naval officer who suffered for the rest of his life from the consequences of a motorcycle accident that happened before Mary was born. Latterly he took the position of verger in Salcombe Regis parish church. He died in 2000. Her mother Patricia Gillian (Jill) continues the role of verger at the church. Mary also has an elder brother Simon Francis bennett Thomson [1][3][4]

She did not grow up in a horsey family, but became fascinated by the vicar's pony, and eventually, aged 6, she persuaded her mother to lead her around the lanes on it. After that, she rode everything she could, even a donkey, and realised that she wanted to become a professional rider. It was not until she went to watch the Badminton Horse Trials, aged 11, with Axe Vale Pony Club, that she realised she wanted to become a professional three-day-event rider. [3]

After school, she went to work for Sheila Willcox, a former European Champion, where she learned everything, from breaking in and producing young horses, to top class stable management. [3]

A longing to travel took her to Zermatt where she worked as a chalet girl and which she described as being "great fun and a doddle after working in the yard". Subsequently she joined the tall ship, Sir Winston Churchill, first as a trainee, then as a watch leader, before returning to set up her own stables. [3]

King converted a couple of cow sheds in a disused farmyard near her home and looked after other people's horses, gave riding lessons and bought and sold horses. To supplement her income, she cleaned houses, cooked, kept gardens tidy for people and delivered meat for the local butcher. [3]

Funding proved even more difficult in 1988 when she started competing professionally, requiring her to sell horses which had proven successful. This changed, when after being offered good money for Divers Rock, a horse on which she had achieved 7th place at Badminton, she turned the offer down commenting "I'd rather be famous than rich." It proved to be the right decision because she secured her first sponsorship deal on the back of her success. [3]

King went to her first Badminton in 1985, finishing in seventh place, and finally won the event in 1992 with her horse, King William. She later won the event again in 2000 with Star Appeal. [3]

In 2001, whilst exercising horses at her home, she had a fall which broke her neck. However, less than a year later she was back at the top of the sport recording top ten placings at major international events including a 3rd placing at Burghley Four Star on her great campaigner King Solomon III. [3]

She has won six team gold medals at World Equestrian Games and European Championships. She has been British Champion four times, more than anyone to date. King has also represented Britain in five Olympic Games: 1992, 1996, 2000, 2004 and 2008. She won bronze with the 2008 Olympic team with Call Again Cavalier.

She married Alan King (known as David King) in 1995 and they and their two children, Emily and Freddie, live in Salcombe Regis, Devon. [1][5] 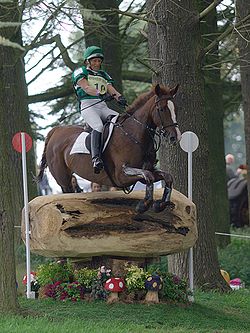 Mary King on King's Gem at the 2007 Blenheim Horse Trials 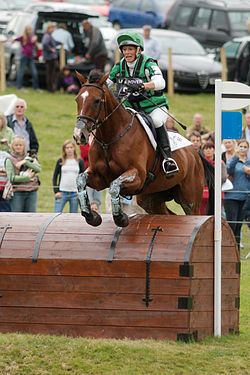 Mary King and Kings Temptress at the Discovery Valley during the cross country phase of Burghley Horse Trials 2009. 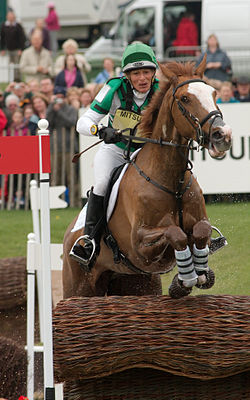 Mary King and Apache Sauce jump the Lake during the cross-country phase of Badminton Horse Trials 2008.

Midas Interactive brought out the computer game Mary King's Riding Star which was available on a variety of platforms.