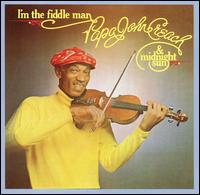 "I'm the Fiddle Man" is Papa John's fourth solo album and the first with . The album was recorded after left following the successful album, . The supporting band on this album is known as Midnight Sun, and had a similar lineup to Zulu on . This album featured fewer original compositions than the previous album.