Olefin metathesis or transalkylidenation is an organic reaction that entails redistribution of alkylene fragments by the scission of carbon - carbon double bonds in olefins (alkenes).[1] Its advantages include the creation of fewer sideproducts and hazardous wastes. Yves Chauvin, Robert H. Grubbs, and Richard R. Schrock shared the 2005 Nobel Prize in Chemistry for "the development of the metathesis method in organic synthesis".[2]

The reaction is catalyzed by metals such as nickel, tungsten, rhenium, ruthenium and molybdenum. The reaction consists of an alkene double bond cleavage, followed by a statistical redistribution of alkylidene fragments. The general scope is outlined by the following scheme:

Olefin metathesis was first commercialized in petroleum reformation for the synthesis of higher olefins from the products (α-olefins) from the Shell higher olefin process (SHOP) under high pressure and high temperatures. Traditional catalysts are derived from a reaction of the metal halides with alkylation agents for example WCl6-EtOH-EtAlCl2. A metathesis reaction is a chain reaction that begins when a metallocarbene and an olefin react to form a metallacyclobutane. This intermediate then reacts further, decomposing into a new olefin (the product) and a new metallocarbene, which can then be recycled through the reaction pathway. 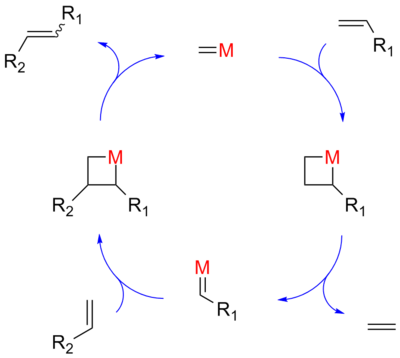 The Grubbs' catalyst is a ruthenium carbenoid,[3] whereas molybdenum(VI) and tungsten(VI)-based catalysts are known as Schrock alkylidenes.[4] Related complexes can also catalyze alkyne metathesis and related polymerizations.

Hérisson and Chauvin first proposed the widely accepted mechanism of transition metal alkene metathesis.[5] The direct [2+2] cycloaddition of two alkenes is formally symmetry forbidden and thus has a high activation energy. The Chauvin mechanism involves the [2+2] cycloaddition of an alkene double bond to a transition metal alkylidene to form a metallocyclobutane intermediate. The metallocyclobutane produced can then cyclorevert to give either the original species or a new alkene and alkylidene. Interaction with the d-orbitals on the metal catalyst lowers the activation energy enough that the reaction can proceed rapidly at modest temperatures.

Some important classes of metathesis chemistry:

Like most chemical reactions, the metathesis pathway is usually driven by a thermodynamic imperative; that is, the final products are determined by the energetics of the possible products, with a distribution of products proportional to the exponential of their respective energy values.

Alkene metathesis is often generally driven by the evolution of ethylene, and alkyne metathesis is driven by the evolution of acetylene, which are both gases; hence, metathesis reactions, if they are not ring-opening or ring-closing, usually use monosubstituted and 2,2-disubstituted alkenes and terminal alkynes. These are both dominated by the entropy gained by the net release of gas. Enyne metathesis cannot evolve a simple gas, and for that reason is usually disfavored unless there are accompanying ring-opening or ring-closing advantages. Ring opening metathesis usually involves a strained alkene (often a norbornene) and the release of ring strain drives the reaction. Ring-closing metathesis, conversely, usually involves the formation of a five- or six-membered ring which is highly energetically favorable; although these reactions tend to also evolve ethylene. RCM has been used to close larger macrocycles, in which case the reaction may be kinetically controlled by running the reaction at extreme dilutions.[6] The Thorpe-Ingold effect may be exploited to improve both reaction rates and selectivity.

Alkene metathesis is synthetically equivalent to (and has replaced) a procedure of ozonolysis of an alkene to two ketone fragments followed by the reaction of one of them with a Wittig reagent.

One study reported a ring-opening cross-olefin metathesis based on a Hoveyda-Grubbs Catalyst:[7]

Known chemistry prior to the advent of olefin metathesis was introduced by Karl Ziegler in the 1950s who as part of ongoing work in what would later become known as Ziegler-Natta catalysis studied ethylene polymerization which on addition of certain metals resulted in 1-butene instead of a saturated long-chain hydrocarbon (see nickel effect) [9].

In 1960 a Du Pont research group polymerized norbornene to polynorbornene using lithium aluminum tetraheptyl and titanium tetrachloride [10] (a patent by this company on this topic dates back to 1955 [11]),

a reaction then classified as a so-called coordination polymerization. According to the then proposed reaction mechanism a RTiX titanium intermediate first coordinates to the double bond in a pi complex. The second step then is a concerted SNi reaction breaking a CC bond and forming a new alkylidene-titanium bond, the process then repeats itself with a second monomer:

Only much later the polynorbornene was going to be produced through ring opening metathesis polymerisation. Giulio Natta in 1964 also observed the formation of an unsaturated polymer when polymerizing cyclopentene with tungsten and molybdenum halides [12].

In a third development leading up to olefin metathesis researchers at Phillips Petroleum Company in 1964 [13] described olefin disproportionation with catalysts molybdenum hexacarbonyl, tungsten hexacarbonyl, and molybdenum oxide supported on alumina for example converting propylene to an equal mixture of ethylene and 2-butene for which they proposed a reaction mechanism involving a cyclobutane (they called it a quasicyclobutane) - metal complex:

This particular mechanism is symmetry forbidden based on the Woodward-Hoffmann rules first formulated two years earlier. Cyclobutanes have also never been identified in metathesis reactions another reason why it was quickly abandoned.

Then in 1967 researchers at the Goodyear Tire and Rubber Company described a novel catalyst system for the metathesis of 2-pentene based on tungsten hexachloride, ethanol the organoaluminum compound EtAlMe2 and also proposed a name for this reaction type: olefin metathesis [14]. Formerly the reaction had been called "olefin disproportionation."

The Goodyear group demonstrated that the reaction of regular 2-butene with its all-deuterated isotopologue yielded C4H4D4 with deuterium evenly distributed [15]. In this way they were able to differentiate between a transalkylidenation mechanism and a transalkylation mechanism (ruled out):

In 1971 Chauvin proposed a 4-membered metallocycle intermediate to explain the statistical distribution of products found in certain metathesis reactions .[16] This mechanism is today considered the actual mechanism taking place in olefin metathesis.

The active catalyst, a metallocarbene.[17], was discovered by in 1964 by E. O. Fischer. Chauvins experimental evidence was based on the reaction of cyclopentene and 2-pentene with the homogeneous catalyst tungsten(VI) oxytetrachloride and tetrabutyltin:

The three principal products C9, C10 and C11 are found in a 1:2:1 regardless of conversion. the same ratio is found with the higher oligomers. Chauvin also explained how the carbene forms in the first place: by alpha-hydride elimination from a carbon metal single bond. For example propylene (C3) forms in a reaction of 2-butene (C4) with tungsten hexachloride and tetramethyltin (C1).

In the same year Pettit who synthesised cyclobutadiene a few years earlier independently came up with a competing mechanism [18]. It consisted of a tetramethylene intermediate with sp3 hybridized carbon atoms linked to a central metal atom with multiple three-center two-electron bonds.

Robert H. Grubbs got involved in metathesis in 1972 and also proposed a metallacycle intermediate but one with 4 carbon atoms in the ring [20]. The group he worked in reacted 1,4-dilithiobutane with tungsten hexachloride in an attempt to directly produce a cyclomethylenemetallacycle producing an intermediate which yielded products identical with those produced by the intermediate in the olefin metathesis reaction. This mechanism is pairwise:

In 1975 Katz also arrived at a metallacyclobutane intermediate consistent with the one proposed by Chauvin [22] He reacted a mixture of cyclooctene, 2-butene and 4-octene with a molybdenum catalyst and observed that the unsymmetrical C14 hydrocarbon reaction product is present right from the start at low conversion.

In 1974 Casey was the first to implement carbenes into the metathesis reaction mechanism:[23]

Grubbs in 1976 provided evidence against his own updated pairwise mechanism:

In this reaction the ethylene product distribution (d4,d2,d0) at low conversion was found to be consistent with the carbene mechanism. On the other hand Grubbs did not rule out the possibility of a tetramethylene intermediate.

The first practical metathesis system was introduced in 1978 by Tebbe based on the (what later became known as the) Tebbe reagent [26]. In a model reaction isotopically labeled carbon atoms in isobutene and methylenecyclohexane switched places:

The Grubbs group then isolated the proposed metallacyclobutane intermediate in 1980 also with this reagent together with 3-methyl-1-butene:[27]

They isolated a similar compound in the total synthesis of capnellene in 1986:[28]

In that same year the Grubbs group proved that metathesis polymerization of norbornene by Tebbe's reagent is a living polymerization system [29] and a year later Grubbs and Schrock co-published an article describing living polymerization with a tungsten carbene complex[30] While Schrock focussed his research on tungsten and molybdenum catalysts for olefin metathesis, Grubbs started the development of catalysts based on ruthenium which proved to be less sensitive to oxygen and water and therefore more functional group tolerant.

In earlier work, Michelotti and Keaveney demonstrated that the ring-opening polymerization of norbornene was catalyzed by hydrated trichlorides of ruthenium, osmium, and iridium in alcoholic solvents, Francis W. Michelotti and William P. Keaveney, J. Polymer Science: Part A, Vol. 3, PP 895-905 (1965), Coordinated Polymerization of the Bicyclo-(2.2.1)-heptene-2 Ring System (Norbornene) in Polar Media. In 1965, Rinehart and Smith demonstrated that norbornene can be polymerized in emulsion using an iridium or ruthenium halide catalyst, Robert E. Rinehart and Homer P. Smith, Polymer Letters Vol. 3, PP.1049-1052 (1965). In 1974, Lido Porri et al. reported on the Ring-Opening Polymerization of Cycloolefins with Catalysts Derived from Ruthenium and Iridium, Die Makromolekulare Chemie, 175, 3097-3115 (1974). They conclude that the reaction of norbornene and aliphatic olefins proceed by a metathesis mechanism. This theme was picked up years later by the Grubbs group, who polymerized the 7-oxo norbornene derivative using ruthenium trichloride, osmium trichloride as well as tungsten alkylidenes.[31]. They identified a Ru(II) carbene as an effective metal center such as (PPh3)2Cl2Ru=CHCH=CPh2:[32]

Schrock entered the olefin metathesis field in 1979 as an extension of work on tantalum alkylidenes.[36]. The initial result was disappointing as reaction of CpTa(=CH-t-Bu)Cl2 with ethylene yielded only a metallacyclopentane, not metathesis products:[37]

But by tweaking this structure to a PR3Ta(CHt-bu)(Ot-bu)2Cl (replacing chloride by t-butoxide and a cyclopentadienyl by an organophosphine, metathesis was established with cis-2-pentene.[38] In another development, certain tungsten oxo complexes of the type W(O)(CHt-Bu)(Cl)2(PEt)3 were also found to be effective.[39] 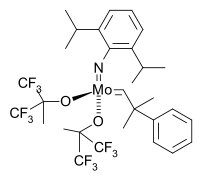 The first asymmetric catalyst followed in 1993 [42]

with a Schrock catalyst modified with a BINOL ligand in a norbornadiene ROMP leading to highly stereoregular cis, isotactic polymer.