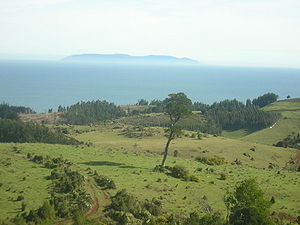 Carahue coastal area with Mocha Island in the distance

Mocha (Spanish: Isla Mocha) is a small Chilean island located west of the coast of Arauco Province in the Pacific Ocean. The island is approximately 48 km2 (19 sq mi) in area, with a small chain of mountains running roughly in north-south direction. In Mapuche mythology, the souls of dead people travel west to visit this island. The island today is home to the Mocha Island National Reserve, a nature reserve that covers approximately 45% of the island's surface. The island is noted as the location of numerous historic shipwrecks. The waters off the island are a popular place for recreational sea fishing.

Depiction of Isla Mocha during an incursion by a Dutch pirate fleet in 1616. From the book that narrates the adventures of Dutch pirate Joris van Spilbergen.

The island was historically inhabited by an indigenous coastal population of Mapuche known as the Lafkenches. It was discovered by Juan Bautista Pastene September 10, 1544, and named Isla de San Nicolas de Tolentino.

According to Juan Ignacio Molina, the Dutch captain Joris van Spilbergen observed the use of chiliquenes (a llama type) by native Mapuches of Mocha Island as plough animals in 1614.[1]

Mocha Island was regularly visited by pirates from the Netherlands and England. Francis Drake and Olivier van Noort are known to have used the island as a supply base. When Drake was visiting it during his circumnavigation of the globe he was seriously hurt by hostile Mapuches that inhabited the island. Eventually the Mapuche on the island were transported in 1685, from Mocha Island by Governor José de Garro to a reducción on the plain on the right bank of the Bio Bio River called the Valley of Mocha that later became the location of the modern city of Concepcion, Chile.

The waters off the island are also noted as the home to a famous 19th century sperm whale, Mocha Dick. American explorer and author Jeremiah N. Reynolds published an account, "Mocha Dick: Or The White Whale of the Pacific: A Leaf from a Manuscript Journal" in May, 1839 in The Knickerbocker magazine in New York. Mocha Dick was the inspiration for the fictional whale Moby Dick in the 1851 novel Moby-Dick by Herman Melville.