The Daniell cell (var. sp. Daniel cell) was invented in 1836 by John Frederic Daniell, a British chemist and meteorologist, and consisted of a copper pot filled with a copper sulfate solution, in which was immersed an unglazed earthenware container filled with sulfuric acid and a zinc electrode. He was searching for a way to eliminate the hydrogen bubble problem found in the Voltaic pile, and his solution was to use a second electrolyte to consume the hydrogen produced by the first. Zinc sulfate may be substituted for the sulfuric acid. The Daniell cell was a great improvement over the existing technology used in the early days of battery development. A later variant of the Daniell cell called the gravity cell or crowfoot cell was invented in the 1860s by a Frenchman named Callaud and became a popular choice for electrical telegraphy.

Originally, the Daniell cell held the two solutions in two separate, but linked, containers, an arrangement described as two half-cells. The first single-cell version of the Daniell cell was invented in 1837 by the Guy's hospital physician Golding Bird who used a plaster of Paris barrier to keep the solutions separate. Bird's experiments with this cell were of some importance to the new discipline of electrometallurgy. A surprising result from Bird's experiments was the deposition of copper on and within the plaster without any contact with the metal electrodes. So surprising, in fact, that it was at first disbelieved by electrochemical investigators, including Michael Faraday. Deposition of copper, and other metals, had been previously noted, but always previously it had been metal on metal electrode. Bird's cell was the basis for the development of the porous pot cell.[1][2] 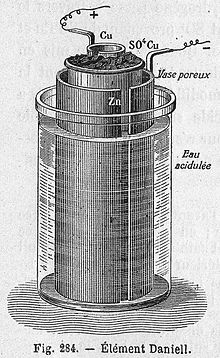 The porous pot version of the Daniell cell was invented by John Dancer, a Liverpool instrument maker, in 1838.[3] It consists of a central zinc anode dipped into a porous earthenware pot containing a zinc sulfate solution. The porous pot is, in turn, immersed in a solution of copper sulfate contained in a copper can, which acts as the cell's cathode. The use of a porous barrier allows ions to pass through but keeps the solutions from mixing. Without this barrier, when no current was drawn the copper ions would drift to the zinc anode and undergo reduction without producing a current, which would destroy the battery's life.[4]

Over time, copper buildup would block the pores in the earthenware barrier and cut short the battery's life. Nevertheless, the Daniel cell provided a longer and more reliable current than the Voltaic pile because the electrolyte deposited copper, which is a conductor, rather than hydrogen, which is an insulator, on the cathode. It was also safer and less corrosive. With an operating voltage of roughly 1.1 volts, it saw widespread use in telegraph networks until it was supplanted by the Leclanché cell in the late 1860s.[5]

Early 20th-century engraving of a gravity cell. Note the distinctive crowfoot shape of the zinc anode.

Sometime during the 1860s, a Frenchman by the name of Callaud invented a variant of the Daniell cell which dispensed with the porous barrier.[5] Instead, a layer of zinc sulfate sat on top of a layer of copper sulfate, the two liquids kept separate by their differing densities, often with a layer of oil added on top to prevent evaporation. This reduced the internal resistance of the system and thus the battery yielded a stronger current.

This variant, called a gravity cell, consisted of a glass jar in which a copper cathode sat on the bottom and a zinc anode was suspended beneath the rim in the zinc sulfate layer. Copper sulfate crystals would be scattered around the cathode and the jar would then be filled with distilled water. As the current was drawn, a layer of zinc sulfate solution would form at the top around the anode. This top layer was kept separate from the bottom copper sulfate layer by its lower density and by the polarity of the cell. A disadvantage of the gravity cell was that a current had to be continually drawn to keep the two solutions from mixing by diffusion, so it was unsuitable for intermittent use. In addition, it was vulnerable to loss of integrity if too much electric current was drawn, which would also cause the layers to mix.

Sometimes called the crowfoot cell due to the distinctive shape of the electrodes, this arrangement was less costly for large multicell batteries and it quickly became the battery of choice for the American and British telegraph networks. Even after most telegraph lines started being powered by motor-generators the gravity battery continued to be used in way stations to power the local circuit at least into the 1950s.[6] In the telegraph industry, this battery was often assembled on site by the telegraph workers themselves, and when it ran down it could be renewed by replacing the consumed components.[7] The zinc sulfate layer was clear in contrast to the deep blue copper sulfate layer, which allowed a technician to measure the battery life with a glance. On the other hand, this setup meant the battery could only be used in a stationary appliance, otherwise the solutions would mix or spill.

In the Daniell cell, copper and zinc electrodes are immersed in a solution of copper (II) sulfate and zinc sulfate respectively. At the anode, zinc is oxidized per the following half reaction: 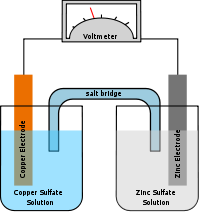 At the cathode, copper is reduced per the following reaction:

The total reaction being:

In the Daniell cell which, due to its simplicity, is often used in classroom demonstrations, a wire and light bulb may connect the two electrodes. Electrons that are “pulled” from the zinc anode travel through the wire, providing an electrical current that illuminates the bulb. In such a cell, the sulfate ions play an important role. Having a negative charge, these anions build up around the anode to maintain a neutral charge. Conversely, at the cathode the copper (II) cations accumulate to maintain this neutral charge. These two processes cause copper solid to accumulate at the cathode and the zinc electrode to "dissolve" into the solution.

Since neither half reaction will occur independently of the other, the two half cells must be connected in a way that will allow ions to move freely between them. A porous barrier or ceramic disk may be used to separate the two solutions while allowing ion flow. When the half cells are placed in two entirely different and separate containers, a salt bridge is often used to connect the two cells. In the above wet-cell, sulfate anions move from the cathode to the anode via the salt bridge and the Zn2+ cations move in the opposite direction to maintain neutrality.