David Anthony Levy (born 1954) is an American psychologist, professor, author, stage director and actor. He has provided psychological perspectives on current events in numerous broadcast and publication media, and is co-author of an internationally best-selling textbook on cross-cultural psychology and critical thinking.

Levy is Professor of Psychology at Pepperdine University’s Graduate School of Education and Psychology, where he has been teaching graduate courses since 1986. In 1991 he served as Visiting Professor of Psychology in the Soviet Union, where he delivered lectures and workshops in psychology and psychotherapy at Leningrad State University (now St. Petersburg), the Leningrad Academy of Science, and the Bekhterev PsychoNeurological Institute. He was honored as a Harriet and Charles Luckman Distinguished Teaching Fellow at Pepperdine (1994–1999), and was a recipient of the Shepard Ivory Franz Distinguished Teaching Award (1989–1990) at UCLA, and the Charles F. Scott Fellowship (1989–1990) at UCLA. 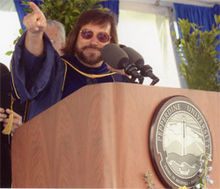 Levy holds professional licenses both in psychology[3] and in marriage and family therapy (MFT).[4] He has worked extensively in private practice and inpatient psychiatric settings, he has supervised clinical interns, and he has utilized his expertise in psychological testing (particularly the MMPI) in forensic cases.

In his featured appearances on over seventy television and radio programs (including CBS,[5] CNN,[6] NBC,[7] CNBC,[8] PBS,[9] NPR,[10] Fox,[11] A&E,[12] Nat Gio,[13] KABC,[14] and E![15]), Levy, a specialist in celebrity psychology, has provided psychological perspectives on current events, and he has examined issues and trends in the mental health field. He has also been quoted extensively in print and online media, most notably providing sport psychology analyses of the Los Angeles Lakers for the Los Angeles Times.[16][17][18][19]

Levy’s numerous theoretical and empirical research studies have been published in scientific journals and presented at professional conferences. His book, Tools of Critical Thinking: Metathoughts for Psychology,[20][21] garnered widespread acclaim and won the endorsements of some of the nation’s most prominent psychologists,[22] including Elizabeth Loftus, Shelley Taylor, Robert Carson, David Myers, and Anne Peplau, with a foreword by Thomas Szasz.

Levy collaborated with Eric Shiraev (George Mason University) on Cross-Cultural Psychology: Critical Thinking and Contemporary Applications,[23] which became an internationally best-selling textbook.[24] He is the author of Family Therapy: History, Theory, and Practice,[25] which was the first textbook on the topic to be available to Russian readers. His Levy Optimism-Pessimism Scale[26] (LOPS) has been utilized internationally in a variety of research contexts.

He is also the author of numerous satirical articles, including "The Emperor’s Postmodern Clothes: A Brief Guide to Deconstructing Academically Fashionable Phrases for the Uninitiated[27]", "How to Be a Good Psychotherapy Patient[28]", "Psychometric Infallibility Realized: The One-Size-Fits-All Psychological Profile[29]", "Stinks and Instincts: An Empirical Investigation of Freud’s Excreta Theory[30]" and "A Proposed Category for the Diagnostic and Statistical Manual of Mental Disorders (DSM): Pervasive Labeling Disorder[31]".

Levy co-created and directed the world premiere of Let's Call the Whole Thing Gershwin,[33][34] which marked the first theatrical revue of the music and lyrics of George Gershwin and Ira Gershwin. Levy also directed the west coast premiere of William Gibson’s Golda: A Partial Portrait,[35] starring Liz Sheridan. He assisted Steve Allen in directing Seymour Glick is Alive But Sick[36] (with Bill Maher), a satirical musical revue produced and written by Allen.

Levy had a starring role in the children’s television series Wonderbug ,[37] for which he received an Emmy nomination[38] in 1977. In 1992 Levy was a guest star on the series Cheers,[39] where he portrayed the leader of Frasier’s “low self-esteem” therapy group. He accrued numerous other professional acting credits, including: One Day at a Time,[40] The World's Greatest Lover[41] (directed by Gene Wilder), Ziegfeld: The Man and His Women[42] (portraying Irving Berlin), Power,[43] Bobby Vinton’s Rock ‘n Rollers,[44] Little Vic,[45] and The McLean Stevenson Show.[46]