Drexel Hill is a census-designated place in Upper Darby Township, Delaware County, Pennsylvania, United States. Drexel Hill is located southwest of Center City, Philadelphia and is part of the Philadelphia metropolitan area. The population was 30,036 at the 2007 census.[1]

Drexelbrook is a community within Drexel Hill that encompasses 1,223 homes in 90 federal style buildings, a Catering Banquet & Corporate Events Center and over 2,600 parking spaces, including 520 private garages. The community provides recreational areas for all ages. There are playgrounds and walking paths throughout.

The Swedish Log Cabin on Creek Road alongside Darby Creek is possibly the oldest log house in North America. Drexel Hill is located within the area claimed by the Swedish colony of New Sweden. The cabin is believed to have been built by early Swedish settlers who were part of New Sweden colony. The cabin was most likely built between 1638 and 1655, but the exact year is not known. Log Cabin architecture was a major contribution of the colonial Swedes. European settlers from other countries copied this style of housing and the log cabin became popular all across America.[4] 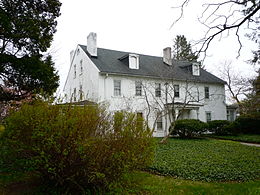 Thornfield, the house of Thomas Garrett a famed abolitionist, lies on Garrett Road (named for his family, who were among the earliest settlers of that part of the Township) and Maple Avenue in Drexel Hill. Garrett resided here before 1822 and would later work as a station master in Wilmington, Delaware, the last stop on the Underground Railroad.

There were 11,896 households out of which 29.9% had children under the age of 18 living with them, 49.6% were married couples living together, 9.9% had a female householder with no husband present, and 36.9% were non-families. 32.0% of all households were made up of individuals and 13.0% had someone living alone who was 65 years of age or older. The average household size was 2.46 and the average family size was 3.19.

Drexel Hill can be subdivided into areas with various income levels. South Of Garrett Road (Garrettford elementary school and Saint Charles church) along Burmont Road and Marshall Road is a "working class" blue collar area with row homes, twin homes, and apartment dwellings. Parking along these side streets in "South Drexel Hill" can be difficult because of the congestion and close proximity of houses. Heading North on Burmont Road you will see small businesses and twin homes and apartment dwellings going right up to the Drexeline shopping center. North of Garrett Road (East of Burmont Road)is mostly single homes with much more open space. State Road before Dermond Field and Drexel Hill Middle School is mostly twin and row homes closer to the upper darby (highland park section) border. State Road and Township Line road after Dermond Field and Drexel Hill Middle School is more upper middle class single homes and the most affluent part of Drexel Hill. The area bound by Garrett road and School Lane adjacent to Upper Darby HS, Monsignor Bonner High School, and Prendie High School is also an affluent part of Drexel Hill called Drexel Park. The outskirts of Drexel Hill (South Drexel Hill specifically the Garrettford/Kellyville and Oakview sections) closer to the Clifton Heights and Lansdowne Borough borders, have seen an influx of new residents from various parts of SE Delco and Philadelphia. The police have a strong presense in this part of Drexel Hill south of Garrett Road to deter/enforce any potential crime. Drexel Hill is a part of Upper Darby township that has been known as a safe area but has suffered deterioration in certain areas.

Saint Alice's Elementary School (The school closed in 2008, but the parish remains open. Victor Taylor was a student at Saint Alice's from 1974 to 1982.)

Television personality Dick Clark resided here from 1954 to 1956 at the Drexelbrook Apartment complex before moving to Wallingford, Pennsylvania, while hosting Barr’s Diamond Theater and a radio show on WFIL, prior to being selected to host American Bandstand. Television personality Ed McMahon also resided at the Drexelbrook, as Dick Clark's neighbor, prior to teaming up with Johnny Carson on "Do You Trust Your Wife?", then "The Tonight Show". Well-known children's author Lloyd Alexander also lived in Drexel Hill with his wife and several cats.

'70s folk/pop singer-songwriter Jim Croce grew up in the Bywood and Drexel Hill sections of Upper Darby. He graduated Upper Darby Sr. High in 1960, and attended Villanova University 1961-1965. He married Ingrid Jacobson of Wallingford. Her family is believed to have bought the house Dick Clark sold upon leaving for the west coat when Bandstand left WFIL in the early '60s. Croce's career was cut short in a Louisiana plane crash, September 20, 1973 after a concert at Northwestern Stae University. Croce was the first to be inducted on Upper Darby High school's "Wall Of Fame" in April 1976. Croce's songs included "Operator (that's not the way it feels)", "Bad, Bad Leroy Brown", "I Got A Name" and "Time In A Bottle".

The characters known as "The Plastics" in the movie Mean Girls are said to have been based upon female high school classmates from Drexel Hill.[10]