Darby is a borough in Delaware County, Pennsylvania, United States, along Darby Creek 5 miles (8.0 km) southwest of downtown Philadelphia. It has a public library founded in 1743 and a cemetery more than 300 years old. The Quakers lived there early in the colonial era. Darby was settled about 1660 and was incorporated on March 3, 1852. In 1900, 3,429 people made their homes there, in 1910, 6,305, and in 1940, 10,334 residents of Darby existed. The population was 10,299 at the 2000 census. There is speculation, according to local historians, that the name "Darby" is related to "Derby" derived from the English town of Derby, in the county of Derbyshire. One explanation states that the Darby Creek closely resembled the English River Derwent, the main body of water that flows through Derby. British immigrants named the town in the new world thus.

Birthplace of comedian and actor, W.C. Fields, born in 1880 at the Buttonwood Hotel, then located at 9th and Main Streets.

It was a New Sweden settlement. 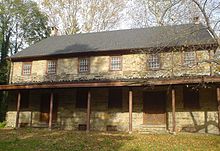 According to the United States Census Bureau, the borough has a total area of 0.8 square miles (2.1 km2), all of it land.

There were 3,405 households out of which 41.3% had children under the age of 18 living with them, 34.1% were married couples living together, 30.0% had a female householder with no husband present, and 29.7% were non-families. 25.6% of all households were made up of individuals and 9.0% had someone living alone who was 65 years of age or older. The average household size was 2.88 and the average family size was 3.45.

In addition to these public institutions, there is in Darby the school known as Blessed Virgin Mary (BVM), a parochial school affiliated with the Roman Catholic Church.