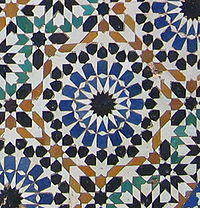 Morocco is a country of multi-ethnic groups with a rich culture, civilization, and etiquette. Through Moroccan history, Morocco hosted many people in addition to the indigenous Berbers, coming from both East (Phoenicians, Jews and Arabs), South (Sub-Saharan Africans) and North (Romans and Vandals). All of which have had an impact on the social structure of Morocco. It conceived many forms of beliefs, from paganism, Judaism, Christianity to Islam.

Each region possesses its own uniqueness, contributing to the national culture. Morocco has set among its top priorities the protection of its diversity and the preservation of its cultural heritage.

In the political world, Morocco is referred to as an Arab state and sometimes as an African state. The majority of Morocco's population is Arab by identity. At least a third of the population speaks the Amazigh language. During the Islamic expansion, some Arabs came to Morocco and settled in the flat regions as Tadla and Doukkala. For example there are groups called Charkawa and Arbawa who settled in Morocco from Arabia. The Charkawa claimed to be descended from Umar ibn Al-Khattab, the second caliph of Islam.

The following figures are taken from the CIA factbook [1].

The history of Moroccan literature starts in the early Middle Ages. In the era of the Berber dynasties, coinciding with the flowering of Al-Andalus there were several important Moroccan writers, especially in the field of religion and historiography, but also poets employed in the courts of, for instance, the Marinid sultans. The same goes for the period of the Saadian and Alaouite kings. The influence of France and the English world (Paul Bowles) on Morocco starts in the 30s of the 20th century. (see: List of Moroccan writers) 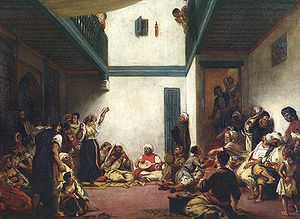 Morocco is considered by some as an Arab-Berber country. Others insist on the Berber-African identity of Morocco. Classical Arabic is the only official language of Morocco but it is nobody's mother tongue and it's used in a limited and formal socio-economic and cultural range of activities (like newspapers and official documents) in competition with French and, until recently, Berber. The most common spoken languages of Morocco, are Berber and Moroccan Arabic.

Linguistically, Berber belongs to the Afro-Asiatic group, and has many variants. The three main varieties used in Morocco are Shilha, Central Atlas Tamazight, and Riff (also called Tamazight by its speakers). Collectively, they are known as "Shelha" in Moroccan Arabic and as "Barbaria" in the Classical Arabic used in the Middle East. The terms "Barbar" and "Shelha" are considered offensive by most Berber activists, who prefer the term Amazigh.

Shilha (also known locally as "Soussia") is spoken in south-west Morocco, in an area between Sidi Ifni in the south, Agadir in the north and Marrakesh and the Draa/Sous valleys in the east. Central Atlas Tamazight is spoken in the Middle Atlas, between Taza, Khemisset, Azilal and Errachidia. Riff is spoken in the Rif area of northern Morocco in towns like Nador, Al Hoceima, Ajdir, Tetouan, Taourirt, and Taza.

For more detailed information on this subject see: Berber languages.

Most Berbers embraced Islam quickly, though their non-Arab ethnic and linguistic distinction has resisted the Arab-Islamic influence. Hundreds of Amazigh (Berber) associations were created in the last few decades in Morocco and Algeria to defend the culture and the identity. Newsstands and bookstores in all the major cities are filled with new Berber publications that provide articles and essays about the Amazigh culture and art. The state owned TV station RTM (now TVM) has started in 1994 broadcasting a daily 10-minute long news bulletin in the 3 Berber dialects. Berber activists are repeatedly demanding a 50% share of broadcasting time in standardized Berber (Tamazight) on all state-owned TV channels. There is also a national Tamazight channel in Morocco, called Tamazight TV. It opened in 2010 and broadcasts for over 6 hours a day with an extended broadcast on weekends.

The distinction between a djellaba and a kaftan is that the djellaba has a hood, while a kaftan does not. Most women’s djellabas are brightly colored and have ornate patterns, stitching, or beading, while men's djellabas are usually plainer and colored neutrally. Women are strongly attached to their "Moroccan wardrobe," despite the financial costs involved; the production of such garments is relatively expensive, as most of the work is done by hand, yet most women purchase a minimum of one new kaftan or takchita every year, normally for a special social event, such as a religious festival or a wedding. Nowadays, it is an unwritten rule that traditional Moroccan dress is worn at such events.

Many foreign directors have been inspired by Morocco or filmed there. In 1952 Orson Welles chose Essaouira as the setting for several scenes in his adaptation of Shakespeare's "Othello", which had won the Grand Prix du Festival International du Film at that year's Cannes Film Festival. In 1955, Alfred Hitchcock directed The Man Who Knew Too Much and in 1962 David Lean shot the Tafas Massacre scene of Lawrence of Arabia in the city of "Ouarzazate", which houses Atlas Studios. Aït Benhaddou has been the setting of many films. The film Hideous Kinky was filmed in Marrakech.

Dar, the name given to one of the most common types of domestic structures in Morocco, is a home found in a medina, or walled urban area of a city. Most Moroccan homes traditionally adhere to the Dar al-Islam, a series of tenets on Islamic domestic life.[1] Dar exteriors are typically devoid of ornamentation and windows, except occasional small openings in secondary quarters, such as stairways and service areas. These piercings provide light and ventilation.[2] Dars are typically composed of thick, high walls that protect inhabitants from thievery, animals, and other such hazards; however, they have a much more symbolic value from an Arabic perspective. In this culture the exterior represents a place of work, while the interior represents a place of refuge.[3] Thus, Moroccan interiors are often very lavish in decoration and craft.

Consistent with most Islamic architecture, dars are based around small open-air patios, surrounded by very tall thick walls, to block direct light and minimize heat.[2] Intermediary triple-arched porticos lead to usually two to four symmetrically located rooms. These rooms have to be long and narrow, creating very vertical spaces, because the regional resources and construction technology typically only allow for joists that are usually less than thirteen feet.[2]

Upon entering a dar, guests move through a zigzagging passageway that hides the central courtyard. The passageway opens to a staircase leading to an upstairs reception area called a dormiria, which often is the most lavish room in the home adorned with decorative tilework, painted furniture, and piles of embroidered pillows and rugs. More affluent families also have greenhouses and a second dormiria, accessible from a street-level staircase. Service quarters and stairways were always at the corners of the structures.[2]