The Civil War in Tajikistan (Tajik: Ҷанги шаҳрвандии Тоҷикистон, Jangi shahrvandii Tojikiston,جنگ شهروندی تاجیکستان) began in May 1992 when ethnic groups from the Garm and Gorno-Badakhshan regions, which were underrepresented in the ruling elite, rose up against the national government of President Rahmon Nabiyev, in which people from the Leninabad and Kulyab regions dominated. Politically, the discontented groups were represented by liberal democratic reformists[8] and Islamists, who fought together and later organized under the banner of the United Tajik Opposition. By June 1997 fifty to one hundred thousand people had been killed.[9][10]

President Rahmonov, UTO leader Sayid Abdulloh Nuri, and Special Representative of the United Nations Secretary-General Gerd Merrem signed the "General Agreement on the Establishment of Peace and National Accord in Tajikistan" and the "Moscow Protocol" on 27 June 1997 in Moscow, Russia, ending the war.[11]

Tensions began in the spring of 1992 after opposition members took to the streets in demonstrations against the results of the 1991 presidential election. President Rahmon Nabiyev and Speaker of the Supreme Soviet Safarali Kenjayev orchestrated the dispersal of weapons to pro-government militias while the opposition turned to rebels in Afghanistan for military aid.

Fighting broke out in May 1992 between old guard supporters of the government and a loosely organized opposition composed of ethnic and regional groups from the areas Garm and Gorno-Badakhshan (the latter were also known as Pamiris). Ideologically, the opposition included democratic liberal reformists and Islamists. The government, on the other hand, was dominated by people from the Leninabadi region, which had also made up most of the ruling elite during the entire Soviet period. It was also supported by people from the Kulyab region, who had held high posts in the Ministry of Internal Affairs in Soviet times. After many clashes, the Leninabadis were forced to accept a compromise and a new coalition government was formed, incorporating members of the opposition and eventually dominated by them.[12] On 7 September 1992, Nabiyev was captured by opposition protesters and was forced at gunpoint to resign his presidency.[10][13] Chaos and fighting between the opposing factions reigned outside of the capital Dushanbe.

With the aid of the Russian military and Uzbekistan, the Leninabadi-Kulyabi Popular Front forces routed the opposition in early and late 1992. The coalition government in the capital was forced to resign. In December 1992, the Supreme Soviet (parliament), where the Leninabadi-Kulyabi faction had held the majority of the seats all along, convened and elected a new government under the leadership of Emomali Rahmonov, representing a shift in power from the old power based in Leninabad to the militias from Kulyab, from which Rahmonov came.[14][15]

The height of hostilities occurred between 1992 and 1993 and pitted Kulyabi militias against an array of groups, including militants from the Islamic Renaissance Party of Tajikistan (IRP) and ethnic minority Pamiris from Gorno-Badakhshan. In large part due to the foreign support they received, the Kulyabi militias were able to soundly defeat opposition forces and went on what has been described by Human Rights Watch as an ethnic cleansing campaign against Pamiris and Garmis.[16] The campaign was concentrated in areas south of the capital and included the murder of prominent individuals, mass killings, the burning of villages, and the expulsion of the Pamiri and Garmi population into Afghanistan. The violence was particularly concentrated in Qurghonteppa, the powerbase of the IRP and home to many Garmis. Tens of thousands were killed or fled to Afghanistan.[14][15][17][18]

In Afghanistan the opposition reorganized and rearmed with the aid of the Jamiat-i-Islami. The group's leader Ahmad Shah Masoud became a benefactor of the Tajik opposition. Later in the war the opposition organized under an umbrella group called the United Tajik Opposition, or UTO. Elements of the UTO, especially in the Tavildara region, became the Islamic Movement of Uzbekistan, while the leadership of the UTO was opposed to the formation of the organization.[19] 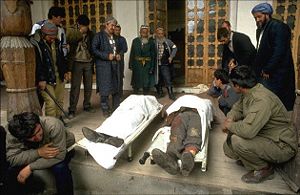 Victims of the war in Tajikistan

Other combatants and armed bands that flourished in this civil chaos simply reflected the breakdown of central authority rather than loyalty to a political faction. In response to the violence the United Nations Mission of Observers in Tajikistan was deployed. Most fighting in the early part of the war occurred in the southern part of the country, but by 1996 the rebels were combating Russian troops in the capital city of Dushanbe. Islamic radicals from northern Afghanistan also began to fight Russian troops in the region. A UN-sponsored armistice finally ended the war in 1997. This was in part fostered by the Inter-Tajik Dialogue, a Track II diplomacy initiative in which the main players were brought together by international actors, namely the United States and Russia. The peace agreement completely eliminated Leninabad region (Khujand) from power. Presidential elections were held on November 6, 1999.

The UTO warned in letters to United Nations Secretary General Kofi Annan and Tajik President Emomali Rahmonov on 23 June 1997 that it would not sign the proposed peace agreement on June 27 if prisoner exchanges and the allocation of jobs in the coalition government were not outlined in the agreement. Akbar Turajonzoda, second-in-command of the UTO, repeated this warning on 26 June, but said both sides were negotiating. President Rahmonov, UTO leader Sayid Abdulloh Nuri, and Russian President Boris Yeltsin met in the Kremlin in Moscow, Russia on 26 June to finish negotiating the peace agreement. The Tajik government had previously pushed for settling these issues after the two sides signed the agreement, with the posts in the coalition government decided by a joint commission for national reconciliation and prisoner exchanges by a future set of negotiations. Russian Foreign Minister Yevgeny Primakov met with the Foreign Ministers of Iran, Kazakhstan and Turkmenistan to discuss the proposed peace accord.[20][21]

By the end of the war Tajikistan was in a state of complete devastation. The estimated dead numbered from 50,000 to as many as 100,000. Around 1.2 million people were refugees inside and outside of the country. Tajikistan's physical infrastructure, government services, and economy were in disarray and much of the population was surviving on subsistence handouts from international aid organizations. The United Nations established a Mission of Observers in December 1994, maintaining peace negotiations until the warring sides signed a comprehensive peace agreement in 1997.[22]