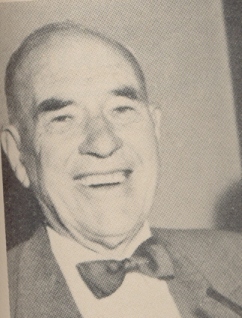 John Cain ( - ) was an politician, who became the 34th , and was the first Leader to win a majority in the . He was the only Premier of Victoria whose son also served as Premier.

Cain was born, one of 18 siblings, in Greendale, near Bacchus Marsh. His father, Patrick Kane, was an Irish-born who worked as a small farmer and contractor.

As a young man John Kane changed the spelling of his surname and converted to . He left no personal papers and very little is known about his youth (so little, indeed, that reference works published during his lifetime, and shortly after his death, continued to give the year of his birth as 1887). He had little education, and worked from an early age as a farm labourer. By 1907 he had moved to , where he worked as a fruiterer in Northcote.

Around 1910 Cain joined the (VSP), a party to the left of the (although like most VSP members Cain was probably also an ALP member at the time). In 1915 he became an organiser with the Theatrical Employees' Union, and in 1916 he became a clerk in the Defence Department. He was sacked from this job because of his opposition to for , and became an organiser with the Clothing Trades Union. From 1915 to 1927 he was a Labor member of the Northcote City Council. In 1921 when many VSP members joined the new , Cain broke his connections with the left and became a mainstream Labor politician.

In 1926 Cain married Dorothea Grindrod, with whom he had two children: his son John Cain was born in 1931, when he was already nearly 50. He sent his son to and later , an unusual choice for a Labor politician at that time.

Cain was elected in 1917 to the as MLA for Jika Jika, which was renamed Northcote in 1927, a seat he held for 40 years. Victoria was Labor's weakest state, and there had never been a majority Labor state government This was partly because of Labor's weakness in rural areas (dominated by the Country Party), and partly because of the strength of Deakinite among middle-class voters in Melbourne. Cain was Assistant Minister for Agriculture in the short-lived minority Labor government of in 1924, Minister without Portfolio in the first minority Labor government of (1927-28), and Minister for Railways and Minister for Electrical Undertakings in the second Hogan government (1929-32).

When Hogan's government collapsed during the and Hogan himself was expelled from the Labor Party, Cain became party Deputy Leader to . Tunnecliffe was notoriously in the pay of the gambling boss , and Cain himself was accused of being a "Wren man". Fact|date=April 2008 It was Wren's influence which led Labor to support the minority Country Party government of from 1935 to 1943. Fact|date=April 2008 Cain succeeded Tunnecliffe as Labor Leader in 1937.

In September 1943 Dunstan resigned, when his government lost a vote of confidence in the Assembly. Cain became Premier for four days while the conservative parties composed their differences. Dunstan then resumed office and retained it with Labor support until November 1945, when he again resigned. After a brief Liberal government under , Cain again became Premier. His parliamentary position was much stronger than it had been in 1943, since the 1945 state elections had given Labor 31 seats to the Country Party's 18 and the Liberals' 13, with three independents.

With a majority in neither House, Cain's government was unable to pass much legislation. In 1947 the Legislative Council blocked his government's budget to show its opposition to the federal Labor government of , which had announced plans to nationalise the private banks. Although this issue had nothing to do with state politics, Cain was forced to resign and call an election, at which Labor was heavily defeated.

The 1950 election, however, gave Labor 24 seats to the Liberals' 27 and the Country Party's 13. Since the Liberals and Country Party hated each other, no stable majority government was possible, and this, together with the unpopularity of the new federal Liberal government, gave Cain his opportunity. In October 1952 the Country Party Premier, John McDonald, resigned and called early elections. Labor won 37 seats, the first time it had won a majority in the Assembly, and Cain formed his third government.

Cain's government was hampered by the hostility of the Legislative Council (which was elected on a restricted property-based franchise and so always had a conservative majority), and also by tensions within his own party. During the war the Communist Party had grown greatly in strength in the trade unions which controlled and funded the Labor Party, leading a faction of anti-Communist Catholics to form within the party to fight Communist influence. (This body, known as The Movement, was organised by and supported by the Catholic Archbishop of Melbourne, ). Conflict between left and right in the Labor Party grew increasingly bitter in the atmosphere of the 1950s.

Nevertheless the Cain government was able to pass more legislation than any previous Labor government in Victoria had done. Major reforms were carried out in the areas of workers' compensation, tenancy law, long service leave, hospitals, public transport, housing, charities and the Crimes Act. Even some reforms to the electoral system were carried through the Council, where Labor and Liberal members united to reduce the malapportionment which had given the Country Party disproportionate representation since the 1920s. In its first two years the Cain government won the approval of the Melbourne daily papers "", "The Herald" and "The Argus".

In 1954, however, the federal Labor Party suffered a public split when the Leader, Dr H. V. Evatt, blamed Santamaria and his supporters in the Victorian ALP for Labor's defeat at the 1954 federal elections. Santamaria exercised strong influence in the Cain government through "Movement" linked ministers such as William Barry and Frank Scully. Protestant and left-wing ministers strongly opposed the Movement faction. In December 1953 the Lands Minister, Robert Holt, resigned rather than introduce a Santamaria-influenced bill which would have promoted the settlement of Italian immigrants as small farmers in (a favourite Santamaria scheme which was seen as a plot to create a Catholic peasantry).

In early 1955 the Labor Party's Federal Executive began to expel Santamaria's supporters from the party. The Victorian branch then split between pro-Evatt and pro-Santamaria factions, and in March the pro-Evatt State Executive suspended 24 members of State Parliament suspected of being Santamaria supporters. Four ministers were forced to resign from the government. When the Parliament met on , the expelled Labor members crossed over to vote with the Liberal and Country Party members to defeat the government. At the election which followed in May, Labor was heavily defeated, winning only 20 seats to the Liberals' 34 and the Country Party's ten. Only one of the expelled Labor members was re-elected.

Cain was now 73, although he remained outwardly vigorous and his real age was a well-kept secret. He retained the leadership and declared that he would fight the next election against the Liberal Premier, . In 1957, however, the ALP split spread to , and Cain went to campaign for Labor at the state election which followed the fall of the Queensland Labor government. In on he suffered a stroke and died within a few hours, aged 75. Labor remained in opposition in Victoria until 1982, when Cain's son, John Cain Jr., led the party back to government.