Club Atlético Atlanta is an Argentine sports club from Buenos Aires. Nicknamed Los Bohemios ("The Bohemians"), its football team won the 2010/11 Primera B Metropolitana championship and promoted to the Primera B Nacional (the second tier of Argentine football league system) for the 2011/12 season.

The club was founded on October the 12th, 1904 in Buenos Aires, Argentina. One source says that the team got its name from an earthquake that had struck Atlanta, Georgia[1] in United States at the time the founders got together to inaugurate the club. Another version about its foundation states that the name "Atlanta" was taken from a navy ship that had arrived to the Puerto de Buenos Aires when Manuel Quintana was proclaimed as President of Argentina.[2] Elias Sanz was name as its first president.

Club's colors, yellow and blue, where chosen from the awnings that decorated the stores in those years.[1] Atlanta's first home field was placed in Juan B. Alberdi y Escalada Avenues of Villa Luro neighborhood[2] but the club will move repeatdtely. That is the reason why the club was nicknamed as Los Bohemios (The Bohemians) which has remained as the nickname for the club and supporters as well.

At the beginning of 1906, Atlanta was affiliated to the third division of the Argentine Football Association. The team debuted on April 22, 1906, winning its match against Racing.

The club is often associated with the Jewish community because of the historical support of Jews in the area of Villa Crespo, notable Jews have been part of the teams administration and squad (e.g. Fabian Lagman and Jaime José Rotman).[3] 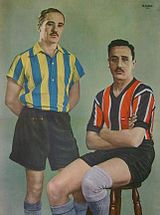 Santiago Carignano (Atlanta) and Francisco Santia (Chacarita), players that starred the derby of 1936.

Atlanta's main rival is Chacarita Juniors. The rivalry originated in 1922, when Chacarita established very close to Atlanta's home and stadium. The Funebrero stayed there until 1930 when moved to San Martín, in Greater Buenos Aires, where has remained since, although the rivalry with Atlanta never ended.

The first official match between both teams was on November 13, 1927 and Chacarita won 2-0. The first time Atlanta defeated the Funebrero was in 1930, with a score of 1-0. In the professional era, the first contest between Atlanta and Chacarita was on June 4, 1931, being Atlanta the winner for a 3-1 score.

Atlanta and Chacarita faced 126 times: Atlanta won 34 scoring 144 goals. On the other side, Chacarita won 54 games and scored 191 goals. They tied 38 times. The biggest win achieved by Atlanta was in 1944, when defeated Chacarita 7-1.

Santiago Rico played the most games for Atlanta with 16 appeareances, while Luciano Agnolín is the top scorer with 7 goals.

The team stadium, "Don León Kolbovsky", is located in Villa Crespo neighborhood, in the city of Buenos Aires. It was inaugurated in 1960 during a match between Atlanta and Argentinos Juniors. Its name is a tribute to the man who presided the club when the stadium began to be built and has a capacity of 34,000. It is also known as the "Wooden Monumental", in reference to River Plate's Estadio Monumental, the biggest and with the largest capacity in Argentina.

In February 2005, the Government of Buenos Aires closed the stadium due to its poor sanitary and security conditions. In January 2006 the stadium was partially re-opened but it was closed again a month later. The same year Atlanta signed a contract with a company to built two concrete grandstands which would replace the wooden one that still stood there. Once the restructuring was finished, Atlanta could dispute its home games in its own stadium after three years. The León Kolbovsky was re-opened in March 2009, when Atlanta defeated Deportivo Español 3-1 with 6,000 supporters in the new concrete grandstands. [4]

Since the team lacked an official home stadium for its first six decades, it was nicknamed "Los Bohemios", as the team would wander from place to place forced to play "home" games in other team's stadiums. The label is also associated to the fans, or any supporter of the team. The singular form, "El Bohemio", is also accepted and can be used when referring to the organization, a particular player or the actual team. 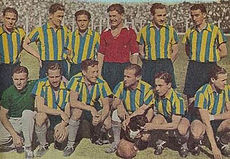 The 1936 Atlanta team with its mascot, the dog "Napoleón" (seated).

One of the most curious cases in the history of the club refers to a dog, called "Napoleón" (whose name had been taken from the Emperor of the French) who would became a club legend. The dog had became famous in 1936, when before each match disputed by Atlanta, Napoleón used to show his skills with the ball to the spectators at the Villa Crespo stadium. The animal's awesome hability was claimed even by rival supporters [5]. The dog also barked fiercely when the rival team appeared on the field, and moved happily his tale when Atlanta players jumped to the grass. "Once the referee started the match, Napoleón took his place outside the field and run following the movements of the ball. During the corner kicks, the dog always stood behind the goal" [6]

Napoleón had been adopted by Atlanta players after a match against Talleres played in Remedios de Escalada: with the dog on the field, Atlanta scored 4 goals in the second half after finishing with a loss of 5-1 at the end of the first period (when Napoleón could not stay with the team on field). The match finally ended with a 5-5 tie and therefore the dog was adopted by Atlanta players as their mascot, because they considered the dog had brought good luck to the team.

On April 6, 1938, a group of Atlanta supporters met at the house of Napoleón's owner, Francisco Belón. They were making the arrangements to take Napoleón to La Plata for the match Atlanta had to play against Estudiantes. But the front door left opened and the dog run to the street, and was killed by a car. The newspaper Ahora titled the next day: "Napoleón, a true ace of Porteño football, passed away" [7]

Napoleón was not buried, but his body was embalmed and kept by his owner, Francisco Belón, in the house of Villa Crespo where he lived. On October 2004, when Atlanta celebrated its 100th anniversary, the embalmed body of Napoléon came back to the stadium (now called León Kolvobsky) being exhibited by Francisco Belón's son, Osvaldo. The dog was one of the most ovationed symbols of the club, along with human celebrities as Osvaldo Miranda (proclaimed as the most famous Atlanta fan by the institution that evening) and Carlos Griguol. [8]

The Atlanta team that won its first title in 1956.

The squad that achieved its second championship in 1983.

(1) The "Copa Suecia" ("Sweden Cup" in Spanish) was a tournament organized by the Argentine Football Association, in order to be played while the national team was playing the 1958 World Cup at Sweden.

All the First Division teams were invited to participate and the final match was played in 1960. The trophy given to the winner (Club Atlético Atlanta) was a gift from the Sweden ambassador in Argentina, Carl Borgenstierna.[9]