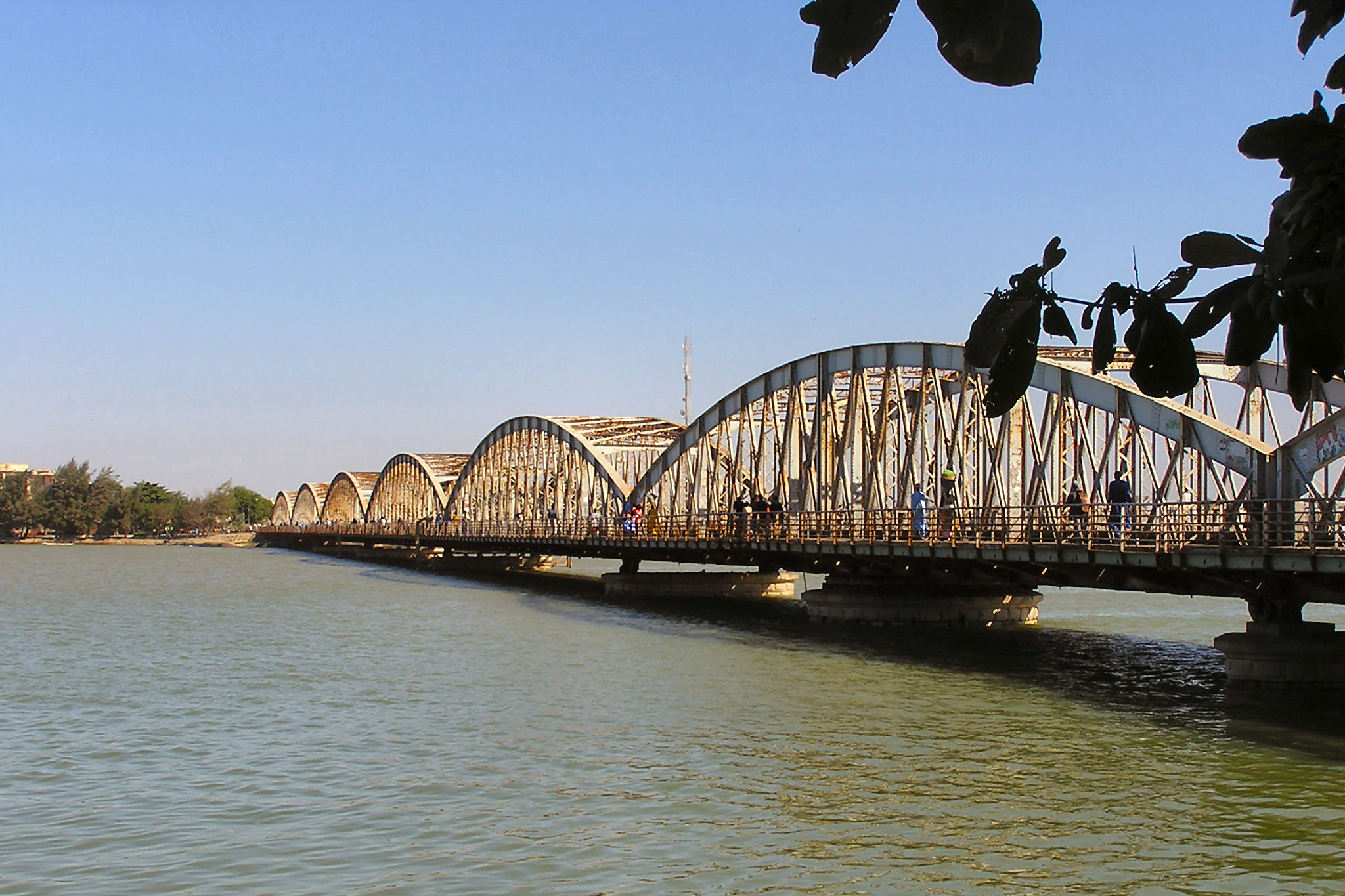 Faidherbe Bridge [fr icon [http://www.culture.gouv.fr/culture/inventai/extranet/revue/insitu3/d7/text/d7.pdf Saint–Louis du Sénégal, un enjeu pour le patrimoine mondial] ] is a road bridge over the which links the island of the city of Saint-Louis in to the n mainland.

The city of Saint-Louis, [fr icon [http://www.elysee.fr/elysee/elysee.fr/francais/actualites/deplacements_a_l_etranger/2005/fevrier/fiches/senegal/l_ile_saint-louis-le_pont_faidherbe.27707.html Le pont Faidherbe (Ile Saint-Louis)] ] the first capital of the is situated on an island near the of the . It is separated from the by a thin 40 km [fr icon Boubou Aldiouma, [http://www.recherches-africaines.net/document.php?id=344 L’ouverture de la brèche de la Langue de Barbarie et ses conséquences - approche géomorphologique] in "Recherches Africaines" (secţiunea 1.1)] strip of sand called the , which starts from in and extends all the way to Saint-Louis. The suburbs of "Guet Ndar" and "Ndar-Tout" are situated in this area.

All the way to the 19th century, access to the island was made through boats. The troups, horses and all the equipment of the French colonial army were moved with some very light boats which could break at any moment.

In 1858, , the governor of , [en icon [http://www.salysenegal.net/activites/excursions/excursionssaintlouisouis.htm www.salysenegal.net] ] inaugurated the "Bouteville" boat that was capable of transporting 150 passengers, animals and all kinds of goods. The boat made 10 crosses every day and the costs differed: five for a person, 50 for a , or , and two s for a carrage.

In less than a year it was obvious that this system was overrun and a second boat was introduced but with no succes.

Seeing this, a captain "Robin", friend of , asked the print , "Minister of Algeria and the African Colonies", the approval for the construction of a floating bridge. Opened on , the bridge had a total length of 680 m (the floatring part of the bridge had a length of 350 m) and a width of four metres. The floating part was formed from 40 metal pontoons which supported a wooden . Three of these pontoons were specially designed so that it could be created a 20m gap so that large vessels could pass. The bridge was named Faidherbe Bridge by a decree of .

The opening in of the Saint-Louis - railway increased the traffic over the bridge. The railway reached all the way to "" and all the goods hauled between the coast and the railway station had to cross over the bridge. To prevent the breakdown of the bridge a special decree was given so that the maximum weight for a vehicle that crosses the bridge to be less than one and a half tonnes.

With all its difficulties the bridge remained in service 32 years, until when it was dismantled.

Construction of a new bridge

In the opening of his speech in the "General Council of Senegal", governor proposed that the country should take a loan for infrastructure development. The council agreed on a loan worth five million gold francs, much of the money being for the construction of a metallic bridge between Saint-Louis and "Soc". The loan was approved on by the French president . A French bank , agreed to give the loan with a low of only four percent.

The was organised by the "Ministry of Colonies" which sent to five offers for evaluation.

After examining each one these offers the "Faidherbe Bridge Committee" selected two of them:
* the Nouguier, Kessler et Cie offer;
* the Société de Construction de Levallois-Perret (owned by ).

The "Faidherbe Bridge Committee" and the technical committee in agreed that the "Société de Construction de Levallois-Perret" project was the best for the site. On the other hand the president of the public works in and councilman Jean-Jacques Crespin supported the "Nouguier, Kessler et Cie" project. In the end the contract was awarded to "Nouguier, Kessler et Cie" at a price of 1.88 million gold francs.

Links between Faidherbe Bridge and King Carol I Bridge

There are many miths regarding the construction of the Faidherbe Bridge which are present even today and are depicted in some tourist guides. The construction of the bridge is attributed to . In general it says that the metallic parts of the bridge represents a gift from the and that the parts were originally designed for the over the in . Other sources say that the metallic parts were intended for a bridge in over the in or . Finally another myth regarding the beams of the bridge says that the parts were intended for an unspecified site but the vessel transporting mysteriously sunk and the authorities in took advantage of this situation and built a local bridge.

The information available in for the in as well as the results of scientists in say that the myths are pure fiction.

First of all the never finalised the construction contract with the company of of with another foreign company, taking the decision to build the bridge only with local companies. The bridge was made entirely by ns, fulfilling the design of , which was also the supervisor of the site. In these conditions, not knowing if the contract will be approved, it is unlikely that a foreign company would build the whole superstructure of the bridge. On the other hand, in there was no need to construct a low bridge like the Faidherbe because of the trade routes.

Construction of the metallic bridge

Opening of the bridge

A first opening of the bridge took place in the same day with the ceremonies for the national day of in in the presence of governor Chabié. The ribbon for the access zone was cut by the governor's wife, then the officials walked a short distance to the mobile deck, which was opened to allow the passage of the military ship "L'Ardent". 21 cannon shots were fired at and to commemorate the construction of the bridge and in that day there were organised ceremonies including s an races.

The second opening was on in the presence of , the prime minister of the colonies.

After more than 100 years since it was opened the bridge is starting to suffer from and it is in need of urgent repair.

The rehabilitaion works [fr icon [http://www.afd.fr/jahia/Jahia/home/activite/Transport/op/edit/pid/934 Sénégal : Projet de réhabilitation lourde du pont Faidherbe à Saint-Louis] ] are co financed by the (AFD) and by the . The total cost of the works was estimated to be US$ 27 million, of which US$ 17 million is from AFD and US$ 10 million is from the government