Olivet is a commune in the Loiret department in north-central France.

Olivet is located in the septentrional bend of the Loire, which crosses from east to west. Olivet belongs to the vallée de la Loire sector between Sully-sur-Loire and Chalonnes-sur-Loire, which was in 2000 inscribed by UNESCO as a World Heritage Site.

Olivet is 120 km south-south-west of Paris. Olivet is bordered to the north by Orléans and to the south by the Sologne.

Olivet is crossed by the Loiret, a 13 km long river which is both a tributary and a resurgence of the Loire.

The first traces of inhabitants belong to the Merovingian era. The water mills along the river were built by monks during the tenth century.

The first name of the village, during eleventh century, was Saint Martin du Loiret. The name Olivet comes probably from Mount of olives.

The village suffered severe destructions during the Hundred Years' War, especially during the Siege of Orléans.

During the nineteenth century the river sides became a resort. Most of the surface was still devoted to agriculture, specialised in flowers, vegetable and fruits.

Nowadays Olivet is a growing city of more than 20.000 inhabitants. 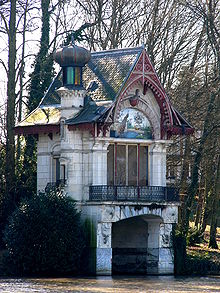 On the north side of the main bridge, the Horloge fleurie is a giant clock on a flowery slope.

The Eglise Saint Martin is a historical monument whose building began in the thirteenth century.