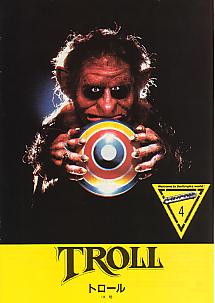 The film begins with the Potter family moving into a new apartment complex. While unpacking, their young daughter Wendy is attacked by a inexplicably living in the basement. Using an ring, it captures Wendy in it and transforms into her. After meeting the other eccentric tenants, the family notices Wendy's unusual behavior (roaring, biting, tossing people across rooms...) but attributes her behavior to the stress of the move. The only one that notices something is terribly wrong is Harry Potter Jr. (). Frightened by his sister's sudden violent changes, he seeks solace in the company of a mysterious old lady, named Eunice St. Clair (), who lives upstairs. When he begins to tell her of the strange goings-on, she reveals to him her real profession: a . Harry asks Eunice to teach him magic, but she says that there isn't time. She tells him of her long history stretching back to the time of magic, when she and a man named Torok fell in love. However, the balance of the realms of magic and men where challenged by Torok in a great war and he was punished to be forever transformed into a troll. Eunice stands guard at this apartment, waiting patiently for Torok to challenge the realms again, and that is what is going on now. The troll had already began going room to room, attacking the tenants and hideously transforming them into mythical creatures according to their personalities, resembling s, s, an and a , and their rooms into lush fairy worlds. In a final attempt to stop Torok's hostile takeover of the apartment complex, Eunice and Harry enter the troll's magical alternative world. Eunice is attacked by Torok and turned into a tree stump and Harry find his sister trapped in a coffin of glass a la . Suddenly Torok's great bat monster attacks, disabling Harry. When it goes after Wendy, Torok kills it, destroying his carefully constructed fairy realm. As the magic world collapses around them, Harry and his family are given a chance to escape, leaving just as the police arrive. As the police investigate the house, one of them is drawn into a remaining fragment of the alternative fairy world, setting up for the unrelated sequel.

imilarities to the "Harry Potter" series of books and films

This is a quote from an interview with producer Charles Band:

Interviewer: "It's bizarre, isn't it? You have a young boy named Harry Potter who discovers that he has magical powers and uses them to fight a troll."

Charles Band: "I've heard that JK Rowling has acknowledged that maybe she saw this low-budget movie and perhaps it inspired her. Who knows what the story is? Life's too short for a fight as far as I'm concerned but, having said that, there are certain scenes in that movie, not to mention the name of the main character, and this of course predates the Harry Potter books by many, many years. So there's that strange connection." [cite web|title=Charles Band interview with MJ Simpson|author=Paul Heath|title=Simpson (Part 2)|url=http://www.mjsimpson.co.uk/interviews/charlesbandb.html|accessdate=2008-06-10]

On April 14, 2008 John Buechler's partner in the Troll remake, Peter Davy, said about Harry Potter, “In John's opinion, he created the first Harry Potter. J.K. Rowling says the idea just came to her. John doesn't think so. There are a lot of similarities between the theme of her books and the original Troll. John was shocked when she came out with Harry Potter." [cite web|title=Helmer says he invented Harry Potter|author=Paul Heath|work=The Hollywood News|url=http://www.thehollywoodnews.com/artman2/publish/movie_news/Helmer_says_he_invented_Harry_Potter_21140408.php|year=2008|accessdate=2008-06-10]

*This film features an appearance from a young .
*Jenny Beck received a nomination for Exceptional Performance by a Young Actress, Supporting Role in a Feature Film - Comedy, Fantasy or Drama in 1987 for her role in Troll.
*One of the residents is named (), named after the author of "", .

"Troll" is featured in the DVD documentary, "The 50 Worst Movies Ever Made".

* [http://www.mjsimpson.co.uk/interviews/charlesbandb.html Charles Band discusses the connection] between his creation of the Harry Potter character and JK Rowlings in an interview.
* [http://www.cinemablend.com/new/Troll-Remake-Gets-Official-5828.html Troll 2008 Remake with Harry Potter]