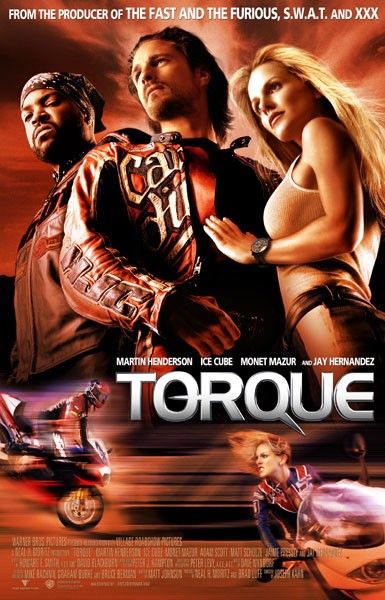 Henderson plays biker Cary Ford, who is framed by an old rival and gang leader for the murder of Trey's (Ice Cube) brother. Ford is now on the run trying to clear his name of the murder with Trey and his feared gang looking for blood.

imilarities to The Fast and the Furious

The film has often been called "The Fast and the Furious" on Motorcycles," Fact|date=June 2007 referring to the use of many of the same thematic elements between the two films. Both films were produced by .

"Torque" specifically references "The Fast and the Furious" at one point, taking a line directly from the film. Henderson's character Ford borrows 's line, "I live my life a quarter-mile at a time." To which Shane (Monet Mazur) replies, "That is the dumbest thing I have ever heard." In "The Fast and the Furious", Dom, played by Vin Diesel, ends up going to . In "Torque", Ford and the rest of the crew also end up leaving for Mexico. In the DVD special features you can see a hidden clip in the background on the commentary of the escaping characters talking to Dom (Vin Diesel) on a beach in Mexico. The scene, meant to be a tribute, was cut to avoid publicity.

* makes a cameo during the film, playing a band whose concert is disrupted by a fight. Lead singer/songwriter also provided songs to the soundtrack (Trevor Rabin did the score for the movie).
*Ice Cube's character Trey states at one point, "Fuck tha police," a reference to Cube's rap group, 's song of the same name.
*In the first scene where Ford passes the two cars, his tailwind causes a road sign to spin, which reads, "Cars Suck."
*Trey's chain necklace is made of a chain, not a motorcycle chain.
*'s song, "Forever" appears on the soundtrack to the film. Kid Rock stars in the similarly-themed movie, .
*A is knocked over in the first scene that Luther () appears in, probably poking fun at its entry-level status.
*On the director's commentary track on the DVD bonus features, the director and cast frequently poke fun at the absurd nature of the movie.
* Jesse James ( [http://www.imdb.com/name/nm1303492/ uncredited] ) of fame makes a cameo ("Sign said...") when Ford first talks to Shane (~ 0:14:00).
* Dane Cook makes a cameo as Neil.
* At the end of the film, Ford states that he "lives his life a quarter-mile at a time", a direct reference to what said at the end of the "Fast and the Furious".
* A few characters in the film wear shirts promoting certain heavy metal / punk bands. Ford wears a black t-shirt, Luther wears a classic black , Val wears a white sleeveless shirt, and Shane wears a Rolling Stones T-Shirt.
* from can be heard at the end of the movie.
*A key plot point revolves around the chain of the primary antagonist's motorcycle, despite the fact that bike in question is a Yamaha Warrior, which is belt driven.
*The three bikes Ford and his crew ride are as follows:Ford: Dalton: Val: Shane: Triumph
*When viewing the DVD on a PC, you can view a short video of the making of an MTT turbine superbike, that is not accessible in any of the menus or special features if played on a dvd player
*The random logo on Dalton's shirt was actually CGI'd on for the entire movie, after the logo that was on his real shirt wasn't allowed to be shown in the film.
*In the beginning when the fire is show in a reflection of an eye, it is Adam Scott's(who plays Agent McPherson) eye, and also it is his heart beating in the background during the scene when Junior is murdered
* A 281 can be seen in the movie.The truck first appeared in the 1971 film Duel. [http://www.imcdb.org/vehicle_5148-Peterbilt-281-1955.html]