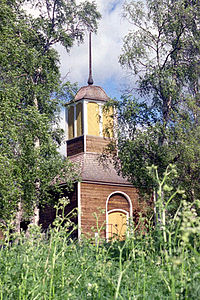 The Sami Church in Gällivare.

The municipality is the third largest in Sweden, but it has not been amalgamated with other entities.

Gällivare Municipality also hosts an airport, Gällivare Airport, the closest one to the national parks Sarek and Padjelanta, making it popular for hikers.

Gällivare is also the central place for The Firstborn Laestadianism.

Gällivare Municipality is a multilingual municipality, as a sizeable portion of the population is made up of Finnish and Sami speakers.

Nearly 40 cases of the rare genetic disorder CIPA have been reported in Gällivare.

There are six localities (or urban areas) in Gällivare Municipality:[3]

The municipal seat in bold

Distribution of the 41 seats in the municipal council after the 2010 election:

Results of the Swedish general election, 2010 in Gällivare: