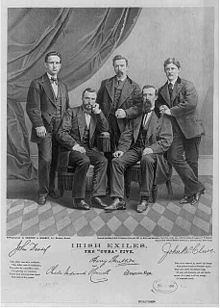 The Cuba Five were a group of Irish rebels released from British prisons in 1871 on condition of not entering Britain until the expiration of their original sentences. They chose to accept exile in the United States, travelling on board the ship Cuba. The five men were John Devoy, Jeremiah O'Donovan Rossa, Charles Underwood O'Connell, Henry Mulleda, and John McClure. On arrival in New York they received a rapturous welcome and attempted to reunite the badly split Fenian Brotherhood. In this they failed, but Devoy and O'Donovan Rossa were to go on to become probably the most outstanding members of the Fenian movement in the USA in the late nineteenth and early twentieth centuries.