The Norse group is a large group of retrograde irregular satellites of Saturn. Their semi-major axes range between 12 and 24 Gm, their inclinations between 136° and 175° and their eccentricities between 0.13 and 0.77. 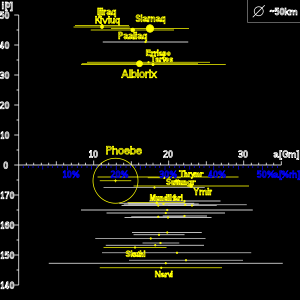 Unlike for the Inuit and Gallic groups, the orbital parameters are widely dispersed and group is likely to be composed from a number of sub-groups with more homogenous orbital and physical parameters. For example, the satellites with inclinations around 174 degree alone are though to be built with at least two sub-groups.

Eight other moons form the Skathi subgroup. Their semi-major axes range between 15 and 20 Gm, their inclinations between 147° and 158°. Narvi forms a separate sub-group with Bestla.

The diagram illustrates the Norse group in relation to other irregular satellites of Saturn. The eccentricity of the orbits is represented by the yellow segments (extending from the pericentre to the apocentre) with the inclination represented on Y axis.

The members of the group are (in order of increasing distance from Saturn):

The International Astronomical Union (IAU) reserves names taken from Norse mythology (mostly giants) for these moons. The exception is Phoebe, the largest, which was discovered long before the others.