Insulin pump, showing an infusion set loaded into spring-loaded insertion device. A reservoir is attached to the infusion set (shown here removed from the pump). 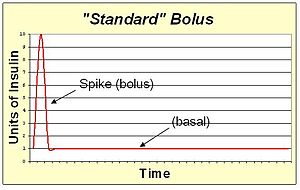 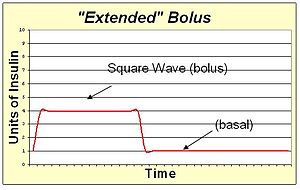 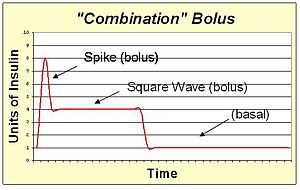 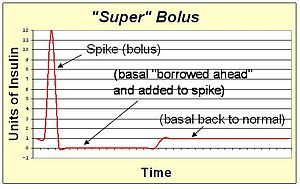 The insulin pump is a medical device used for the administration of insulin in the treatment of diabetes mellitus, also known as continuous subcutaneous insulin infusion therapy. The device includes:

An insulin pump is an alternative to multiple daily injections of insulin by insulin syringe or an insulin pen and allows for intensive insulin therapy when used in conjunction with blood glucose monitoring and carb counting.

To use an insulin pump, the reservoir must first be filled with insulin. Some pumps use prefilled cartridges that are replaced when empty. Most, however, are filled with the insulin prescribed for the user (usually Apidra, Humalog, Novolog or Regular).

An insulin pump allows the replacement of slow-acting insulin for basal needs with a continuous infusion of rapid-acting insulin.

The insulin pump delivers a single type of fast-acting insulin in two ways[1]:

An insulin pump user has the ability to influence the profile of the rapid-acting insulin by shaping the bolus. While each user must experiment with bolus shapes to determine what is best for any given food, they can improve control of blood sugar by adapting the bolus shape to their needs.

A standard bolus is an infusion of insulin pumped completely at the onset of the bolus. It is most similar to an injection. By pumping with a "spike" shape, the expected action is the fastest possible bolus for that type of insulin. The standard bolus is most appropriate when eating high carb low protein low fat meals because it will return blood sugar to normal levels quickly.

A combination bolus/multiwave bolus is the combination of a standard bolus spike with an extended bolus square wave. This shape provides a large dose of insulin up front, and then also extends the tail of the insulin action. The combination bolus is appropriate for high carb high fat meals such as pizza, pasta with heavy cream sauce, and chocolate cake.

A super bolus is a method of increasing the spike of the standard bolus. Since the action of the bolus insulin in the blood stream will extend for several hours, the basal insulin could be stopped or reduced during this time. This facilitates the "borrowing" of the basal insulin and including it into the bolus spike to deliver the same total insulin with faster action than can be achieved with spike and basal rate together. The super bolus is useful for certain foods (like sugary breakfast cereals) which cause a large post-prandial peak of blood sugar. It attacks the blood sugar peak with the fastest delivery of insulin that can be practically achieved by pumping.

Since the pump user is responsible to manually start a bolus, this provides an opportunity for the user to pre-bolus to improve upon the insulin pump's capability to prevent post-prandial hyperglycemia. A pre-bolus is simply a bolus of insulin given before it is actually needed to cover carbohydrates eaten.

There are two situations where a pre-bolus is helpful:

Similarly, a low blood sugar level or a low glycemic food might be best treated with a bolus after a meal is begun. The blood sugar level, the type of food eaten, and a person's individual response to food and insulin have an impact on the ideal time to bolus with the pump.

The pattern for delivering basal insulin throughout the day can also be customized with a pattern to suit the pump user.

For instance, to determine an individual's morning basal requirement, they must skip breakfast. On waking, they would test their blood glucose level periodically until lunch. Changes in blood glucose level are compensated with adjustments in the morning basal rate. The process is repeated over several days, varying the fasting period, until a 24-hour basal profile has been built up which keeps fasting blood sugar levels relatively steady. Once the basal rate is matched to the fasting basal insulin need, the pump user will then gain the flexibility to skip or postpone meals such as sleeping late on the weekends or working overtime on a weekday.

Many factors can change insulin requirements and require an adjustment to the basal rate:

A pump user should be educated by their diabetes care professional about basal rate determination before beginning pump therapy.

Use of insulin pumps is increasing throughout the world because of:

New insulin pumps are becoming "smart" as new features are added to their design. These simplify the tasks involved in delivering an insulin bolus.

In August 2011, an IBM researcher, Jay Radcliffe, demonstrated a security flaw in insulin pumps Radcliffe was able to hack the wireless interface used to control the pump remotely.[9] Pump manufacturer Medtronic later said security research by McAfee uncovered a flaw in its pumps that could be exploited.[10]