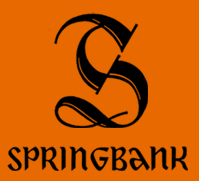 Springbank Distillery is one of the last surviving producers of . The distillery, located on the southern peninsula, produces three distinct types of .

*Springbank Single Malt is the most popular variety. Its standard bottling is a 10 year old, distilled two and a half times, and is not chill-filtered, nor does it have colour added. Distilling whisky two and a half times is quite unusual, as it means that during the distillation process some of the low wines are collected before the second distillation, and then mixed back into the feints for another distillation. This means that some parts of the spirit has been through distillation twice and some parts three times. The spirit is then aged in ex-bourbon and ex-sherry casks, although Springbank is experimenting with rum casks as well. The standard 10 year old bottling is available at 46% volume, but a 100° proof bottling (at 57% volume) is also available. They also produce a somewhat darker 15 year old. A 21 year old variety of Springbank exists, but is increasingly rare.
*Longrow Single Malt is a highly peaty whisky. The standard Longrow is also a ten year old, matured in ex-bourbon casks, while a Sherrywood 10 year old is also available. There is also an experimental -cask edition available.
*Hazelburn Single Malt, the newest variety, was first distilled in 1997 and since bottled as an 8-year-old. Hazelburn is a triple distilled, non-peated whisky, named for another now-defunct distillery.

Springbank is one of only two distilleries in Scotland to perform every step in the whisky making process, from malting the barley to bottling the spirit, on same premises: the other is who also grow their own barley. While a few others still maintain the first step in the process, the of (which is becoming more rare), Springbank also bottles their own whisky. The distillery is also one of the most inactive, having stills operating less than a third of the time.

Springbank is one of the few remaining family owned distilleries. Perhaps it is for this reason that nearly all of its whisky is sold as a single malt, with little of it finding its way into blends. Most blends are produced by larger conglomerates who tend to use the single malts from the distilleries that they own in their blends. Springbank produces two of its own blends, 5 year old Campbeltown Loch, and Mitchell's 12 year old.