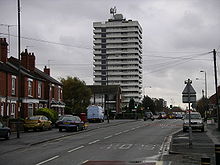 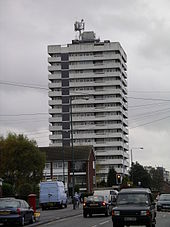 Longfield House is a 17 story block of flats about 51 m tall situated on Bell Green Road, Courthouse Green. It was completed in 1967, and contains 132 flats.[2]

Shopping and Park and Ride

Courthouse Green is home to a Sainsburys superstore and petrol station, and a number of fast food outlets, which are adjacent to the A444 road, in addition the Gallagher Retail Park is on the opposite side of the A444. Also the Coventry Park and Ride North, funded by Centro and operated by Central Connect under contract, is located in Courthouse Green opposite the Sainsburys store. This service won a sixth month reprieve after being under threat of withdrawal in March 2009 due to low passenger usage.