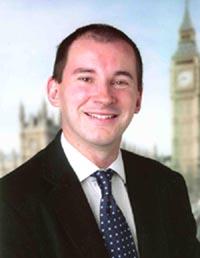 Williams grew up in the South Wales village of in the Cynon Valley. He attended and the , graduating in 1985 with a degree in History. During his first two years he lived in , one of the University's halls of residence. Today Williams remains a member of the Wills Hall Association. He qualified as and worked for several large firms including and .

Williams was interested in politics from a young age. While at the University of Bristol he was President of the SDP/Liberal society, and an active member of the local party. He has also served on Avon County and Bristol City Councils, elected as Councillor for Cabot ward in 1993 aged 26. He was leader of the Bristol Liberal Democrat group from 1995 to 1997. Williams had been the Liberal Democrat candidate for Bristol South in 1997, before being selected to stand for Bristol West at the 2001 general election. Williams won Bristol West in 2005, making him the first Liberal MP ever for that constituency and the first to be elected in the city of Bristol since 1935. He was also the first openly Liberal Democrat MP.

After his election on 5th May 2005, appointed Williams as Liberal Democrat public health spokesperson, shadowing Minister for Public Health . In this role he served on the standing committee which scrutinised the Health Bill. One aspect of this Bill was the introduction of a ban on smoking in public places. Williams strongly supported a ban on smoking in all public places, rather than the alternative proposal to exempt private clubs and pubs which do not serve food from the ban. [http://news.bbc.co.uk/1/hi/uk_politics/4711544.stm] He won an award from Cancer Research UK for his advocacy of a full ban.

Since his election, Williams has served on two House of Commons select committees - the Education and Skills Select Committee and the . He stepped down as a member of the Public Accounts Committee at the beginning of 2006 following his appointment as Further and Higher Education spokesperson in order more exclusively on his portfolio. He transferred to the new Children, Schools and Families Select Committee in November 2007.

On 29th November 2005, Williams attempted to introduce a bill to the House of Commons to reduce the voting age to 16. The motion was supported by a majority of Labour members and Liberal Democrats, but opposed by the Conservatives. It was defeated by 136-128 votes.

In June 2006, Williams launched a campaign against homophobic bullying, after organising the Education and Skills Select Committee's first ever enquiry into the issue of bullying in schools. His petition read:

"We, the undersigned, call for the following to support and protect the victims of homophobic bullying:"

Following the election of as leader, Williams became the spokesperson for Innovation, Universities and Skills.

Williams contested two Bristol City Council elections in Cabot ward before stepping down in 1999. The first, in 1995, saw him elected with 1264 votes (20.61% in a double election), and a majority of just 82 over Labour candidate Paul Garland. That majority increased to 571 in 1998, with Williams polling 1027 votes (53.46%). [http://www.bristol.gov.uk/item/elections/?XSL=main&ShowElectionWard=true&ElectionId=50&WardId=2]