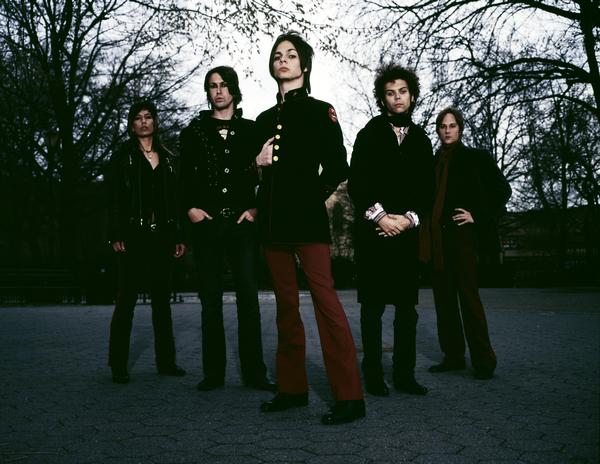 Penny Royal were formed in 2005 by brothers Derek and Evan Dunivan out of , , Penny Royal has quickly established itself as much more than another transient band destined to drown amidst the masses. The genius of the Dunivan brothers, coupled with the talents of their creative counterpart, Omar Al-Bochi, has brought forth exquisitely orchestrated compositions that leave their audience with an ecstatic optimism for the future of rock music.

As many know, Derek and Evan received extensive international acclaim and notoriety with their previous band . They enjoyed raves and top reviews from publications such as , , , and . They shined as featured artists in interviews and stories on and . At the ages of 16 & 14, they signed a deal with 's Divine Recordings, then spent half off 2001 and 2002 touring Europe and North America with the likes of , , and the annual rock event (where they were certainly the odd men out, but soon tour faves in 2001). Prior to hitting the road, Pure Rubbish completed their full-length album entitled with the help of famed producer Mike Clink. However, the album never saw the light of day. While waiting for corporate complications to subside with Divine Recordings (which never did), Pure Rubbish was asked to back for her televised singing debut on the 2002 MTV Movie Awards, putting them in front of 34 million viewers worldwide. As downtime continued with Pure Rubbish, Derek and Evan began expanding their musical interests and further honing their skills, resulting in a distinctly different sound and broadened direction. Eventually, for the purpose of their musical revolution, Pure Rubbish was "scrapped" to make way for the even more ambitious project...Penny Royal.

Derek and Evan parted ways with members Mike McWilliams and Jarrett Gardner and Pure Rubbish broke up in April 2003. Mike McWilliams and Jarrett Gardner eventually formed [http://www.myspace.com/theurgencies The Urgencies] with Al G in July 2003. Derek and Evan spent the rest of 2003 and 2004 composing and auditioning players and soon enough the musical collaborators they had dreamed of were now their band mates. Corey Power was recruited on guitar/ vocals and played with the band from 2005 to 2006.

Now with the cumulative force of Derek Dunivan (lead vocals/lead guitar/keyboards), Evan Dunivan (drums/percussion/vocals), Omar Al-Bochi (keyboards/guitar/vocals), Ariana Renn (bass), and Chase Hamblin (guitar/vocals), a soul stirring, jaw dropping show of shows has been created. With an array of impressive reviews of live shows, a recently successful series of performances in New York in summer 2007, an upcoming, self-produced album, and their first music video near completion in 2008, Penny Royal and members have already been proclaimed as, "Best New Band", "Best Rock Band", "Best Songwriter", "Best Guitarist", "Best Drummer", "Best Vocalist", "Best Live Show", and "Best Band To Change The Face Of Music" by The , The Free Press Houston, Houston Press, and fans from coast to coast. More importantly, Penny Royal is a continuously expanding multimedia vessel geared toward initiating a revolution of the Mind necessary for the age to come.

Penny Royal is currently in the process of completing their first full-length album entitled with hopes of a release in early 2008.

Songs
*Aveil, Avail
*After All
*I Fled From You
*The White Elixir
*20/20
*Fevered People
*Rainbow Skies
*How You Were
*Wondering And Wandering
*Duende