Malvern is a borough in Chester County, Pennsylvania, United States. The population was 2,998 at the 2010 census. The main road through the borough is King Street, although the borough is also bordered by Paoli Pike on the south, and is near US 30 on the north. The primary cross street is Warren Avenue. The areas north and west of the borough along US 30 are simultaneously known as Malvern and Frazer, and the Frazer post office shares the Malvern zip code. East of Malvern is the village of Paoli. Malvern also contains a train stop on the SEPTA Paoli/Thorndale Line.

According to the United States Census Bureau, the borough has a total area of 1.2 square miles (3.1 km2), all of it land.

Malvern is the site of the Paoli Massacre during the American Revolutionary War.

Named after the Malvern Hills, close to the Welsh border in England, Malvern was originally settled by Welsh immigrants in the 17th century. William Penn sold them the land for 10 cents an acre, along with the rest of the land on the Welsh tract.[2] Malvern was incorporated as a borough in 1889, from portions of Willistown Township. On April 22, 2008, the borough converted to a Home Rule form of governance.[3]

There were 1,361 households out of which 23.4% had children under the age of 18 living with them, 46.7% were married couples living together, 8.4% had a female householder with no husband present, and 41.7% were non-families. 34.2% of all households were made up of individuals and 9.4% had someone living alone who was 65 years of age or older. The average household size was 2.23 and the average family size was 2.92.

The Vanguard Group, IKON Office Solutions, Liberty Property Trust and Vishay Intertechnology are among the companies based in Malvern. 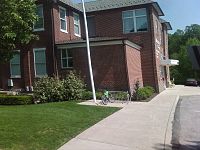 The Great Valley School District serves as the public education for the borough.[6]

In 1899, Japanese polymath Nitobe Inazō wrote Bushido: The Soul of Japan in Malvern, a seminal work in English on the subject.

American singer-songwriter Jim Croce, a Philadelphia native, attended Malvern Preparatory School for one year and is buried in Malvern at Haym Salomon Cemetery, at 200 Moores Road.