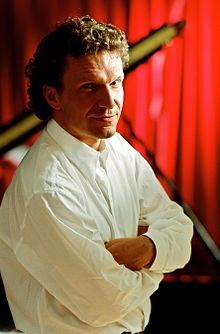 He adores Schubert above all but is also enthusiastic about more obscure works such as Britten's ironic piano concerto, the transcendental oeuvres of Szymanowski or Apostel's „Kubiniana“. Chamber music plays a very important role in his work and so he has performed with Julian Rachlin, Renaud Capuçon, Clemens Hagen, Christian Altenburger, Danjulo Ishizaka, Patrick Demenga, the Artis Quartet, the Auryn Quartet, the Chilingirian quartet, the Gaede Trio and many others.

Through the years Markus Schirmer has written many songs, e.g. for Sandra Pires (a Portuguese-Australian singer living in Vienna) and many other vocalists.

Furthermore he has worked on a number of artistic projects, for example Scurdia, a crossover partnership with the Kurdish lutist Risgar Koshnaw and other exceptional artists from all over the world, which was initialized in 1988.

Schirmer is a professor at the University of Music and Performing Arts Graz where he has been teaching concert piano students from Austria, Greece, Finland, Italy and Japan.

Markus Schirmer is often invited to adjudicate in many international piano competitions and to give master classes all over the world.[citation needed] He has become very committed to Live Music Now, a charitable scheme that was founded by Lord Yehudi Menuhin to support gifted musicians.

Schirmer was awarded the “Music Manual Award“ at the international Music Convention EUROMUSIC. In addition he was recently granted the Karl-Böhm-Interpretationspreis, an award for Austrian artists.

A cabaret written by Markus Schirmer and Graz-based actor Wolfram Berger. It can be seen as a mix of spoonerisms, pop songs, troubadour songs, folk songs und nursery rhymes.

Scurdia is an improvisation project, which brings together extraordinary musicians from all over the world on one stage, thus allowing completely new artistic-creative energies to be set free by bridging various cultures. Among them internationally renowned Venezuela-born Arnoldo Moreno, Ismael Barrios (former active percussionist for Opus, EAV, STS) from Venezuela, the German flutist/saxophonist Reinhard Grube and keyboarder Franz Kreimer (Ausseer Hardbradler)

In collaboration with the American singer and actress Helen Schneider he presents his own adaptation of Kurt Weill’s The Seven Deadly Sins for voice and piano.