Jane Drew with her husband Maxwell Fry in 1984

Dame Jane Drew, DBE, FRIBA (24 March 1911 – 27 July 1996) was an English modernist architect and town planner. She qualified at the AA School in London, and prior to World War II became one of the leading exponents of the Modern Movement in London.

At the time she had her first office, with the idea of employing only female architects, architecture was a male dominated profession. She was active during and after World War II, designing social and public housing in England, West Africa, India and Iran. With her second husband Maxwell Fry she worked in West Africa designing schools and universities, and with Fry and Pierre Jeanneret, on the housing at Chandigarh, the new capital of the Punjab. She designed buildings in Ghana, Nigeria, Iran and Sri Lanka, and she wrote books on what she had learnt about architecture there. In London she did social housing, buildings for the Festival of Britain, and helped to establish the Institute of Contemporary Arts. After retiring from practice she travelled and lectured abroad, receiving several honorary degrees. She was awarded the DBE in the 1996 New Years Honours List, seven months before her death.

Drew was born as Iris Estelle Radcliffe Drew[1] in Thornton Heath, Croydon, Surrey, but her name was registered a few days later as Joyce Beverly Drew.[2] Her father, Harry Guy Radcliffe Drew, was a designer of surgical instruments and the founder of the British Institute of Surgical Technicians. He was a humanist who "despised the profit motive and abhorred cruelty". Her mother was Emma Spering Jones, a school teacher, who when Jane was only four became lame for the rest of her life as the result of a road accident: but she continued to care well for her two daughters, encouraging them in her two main interests which were observation of nature and appreciation of art, and she had a keen business sense. Jane had an older sister, Dorothy Drew (1909–1989), who became a physician.

Jane Drew was educated at Woodford House School in Croydon then at Croydon High School where she became Head Girl. Among her friends at Woodford House were actresses Peggy Ashcroft and Diana Wynyard; and at Croydon High she was friends with the mural artist and book illustrator Barbara Jones (1912–1978), and the popular women's rights campaigner Beatrice "Nancy" Seear, later Baroness Seear.

Jane studied at the Architectural Association School of Architecture (1929–1934).

In 1933 she married architect James Alliston, who had been a fellow-student at the AA. They won a competition for a hospital in Devon, after which she joined Alliston's practice. Their small practice (Alliston & Drew) was at 24 Woburn Square in London, and their principal work was housing in Winchester. The marriage was dissolved in 1939. Jane and Jim had twin daughters, Jennifer (1937–1986) and Georgina (1937–2011).

Jane Drew soon became involved in the Modern Movement, through the Congrès International d'Architecture Moderne (CIAM), whose guiding spirit was the Swiss architect Le Corbusier, and became one of the principal founders of the Modern Movement in Britain, which was represented by MARS (Modern Architectural ReSearch), CIAM's British subsidiary. It was an association of architects, painters and industrialists, and its stated principle was the "use of space for human activity rather than the manipulation of stylised convention". It was through this group that she met Henry Moore, Le Corbusier, Elizabeth Lutyens, and most importantly Maxwell Fry (one of the co-founders of the movement) whom she married in 1942.[3]

Architecture at the time was a male-dominated profession. When Jane practised alone in the war years between 1939 and 1944, her office was at 12 King Street, St. James, London. Initially she employed only female architects, though later this changed. Her work included:

After the war she into business partnership with Maxwell Fry as Fry, Drew and Partners, then later with others. From January 1946 their practice was at 63 Gloucester Place, London W.1. (above which she and Max had a flat which was their home),[4] and in 1962 a second office was opened at 3 Albany Terrace. She was in practice with Max until 1977. 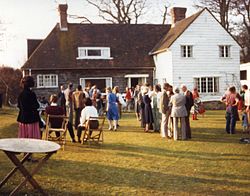 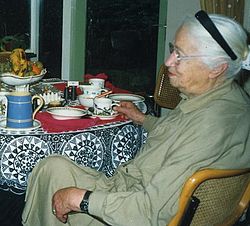 Max had retired in 1973, but Jane continued working until 1979. They already had a country 'retreat' called "The Lake House", at Rowfant near Crawley in Sussex, where they often spent leisure time with friends and family. It was a large house, to which they added a studio-flat which overlooked the fishing lake, and Jane presided over many memorable house and garden parties. Eventually they decided to sell it and find somewhere easier to manage in their retirement. They were staying with a friend in Cotherstone, Teesdale, County Durham when they heard that the next door house was for sale and almost immediately bought it. In 1983 they moved to "West Lodge". They remained active, in making a new home, with gardening and village social life. There was a studio for Max - their living room was dominated by Max's mural of the River Balder Railway viaduct.

In 1984, Jane gave a great party for Max's 85th birthday, at nearby Lartington Hall: there were over 200 guests - friends and family. Two years later she was presented with a 150-page book of gratulari inscribed "Jane B. Drew, architect. A tribute from colleagues and friends for her 75th birthday, 24 March 1986".[6] The list of contributors includes: