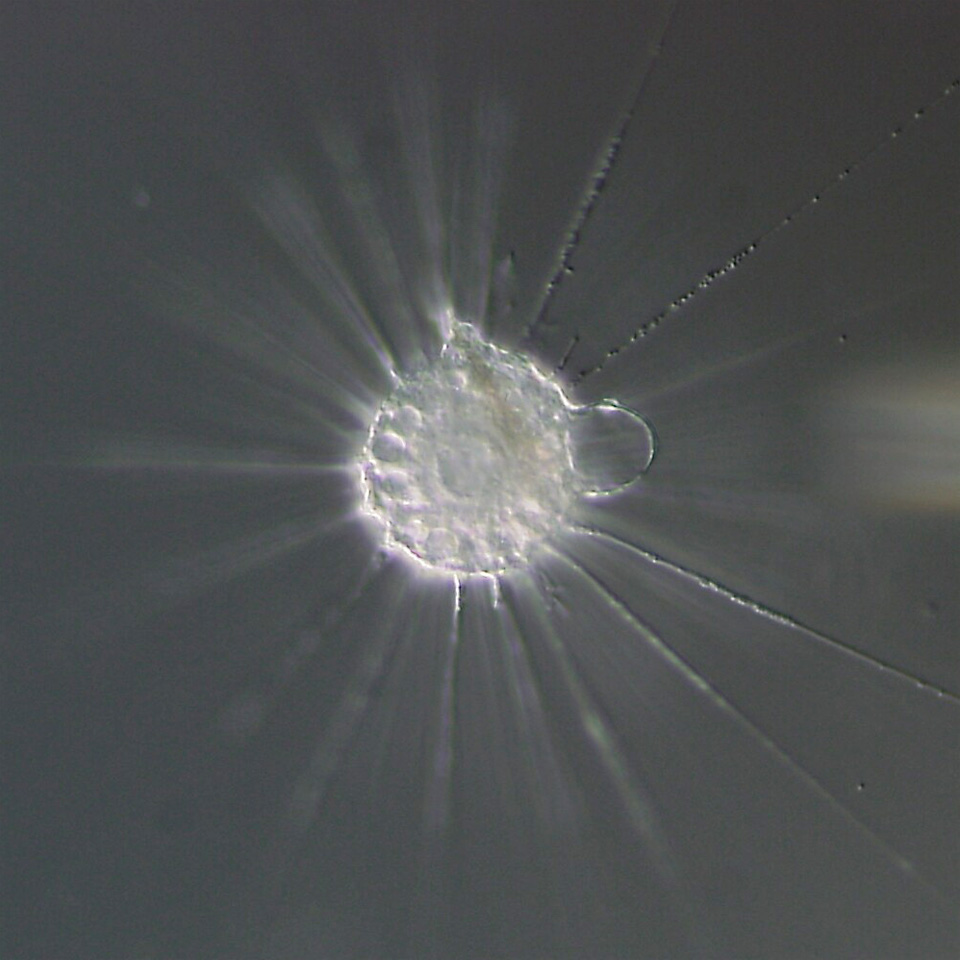 image_caption = "Actinophrys sol"
image_width = 300px
domain = Eukaryota
regnum =
phylum = ophyta
classis = Actinochrysophyceae
ordo = Actinophryida
ordo_authority = 1913
subdivision_ranks = Genera
subdivision = "Actinophrys"
"Actinosphaerium"
The actinophryids are a small, familiar group of n protists. They are the most common heliozoa in fresh water, and are especially frequent in lakes and rivers, but a few are found in marine and soil habitats as well. Each actinophryid are unicellular and roughly spherical in shape, without any shell or test, and with many pseudopodia supported by axopods radiating outward from the cell body, which adhere to passing prey and allows it to roll or float about. The outer portion of the cell, or ectoplasm, is distinct and is filled with many tiny s, which assist in flotation. This is very similar to the process of osmosis. The movement of water from inside the cell to the outside is not because of water concentration in this case. It is the cell pushing the excess water out. A few contractile vacuoles around the periphery of the cell expel excess water, and are visible as clear bulges when full.

There are two genera included here. "Actinophrys" have a single, central nucleus. Most are around 40-50 μm in diameter, with axopods up to 100 μm in length, though this varies. "Actinosphaerium" are several times larger, from 200-1000 μm in diameter, with many nuclei, and are found exclusively in fresh water. Two other genera, "Echinosphaerium" and "Camptonema", have been described but appear to be synonyms.

Reproduction takes place by fission, with open . Under unfavourable conditions, the organism will form a cyst, which is multi-walled and covered in spikes. While encysted it may undergo a peculiar process of or self-fertilization, where it goes through and divides to form two gametes, which then fuse together again. This is the only form of that occurs within the group, though it is really more genetic reorganization than reproduction.

The axopods are supported by s arranged in a unique and characteristic double-coil pattern. In "Actinophrys", these arise from the nuclear membrane, while in "Actinosphaerium" some do and others don't. Other heliozoa where the microtubules arise from the nucleus have been considered possible relatives, and it now appears that the actinophryids developed from s such as "Pedinella". These are specialized algae, related to e, s, e, and the like, which have microtubule-supported tentacles.

As far as the diet of the Actinophyrys goes, the protist feeds on small flagellates, diminutive cilates, microscopic algae, etc.