Joseph Crabtree is a fictional character created in 1954 by James Sutherland at as an academic satire. Sutherland's lectures, and the proceedings of the "Crabtree Foundation" that he founded, were collected and published as the "Crabtree Orations" in 1997. Aside from its home at University College, the Crabtree Foundation has also opened chapters at in and in . Crabtree's name is associated with "". 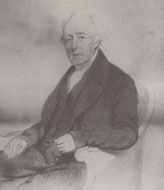 
Joseph Crabtree (stated by his creator to have been born in 1754, at , , and to have died in 1854, at , Yorkshire) was a British poet, polymath and sometime banker and brewer whose life and career have been developed through the research of the scholars and orators of the Crabtree Foundation at from 1954 to the present day. The fictional Crabtree met and influenced , , , and , among others. Notionally well-known before the twentieth century, his reputation was eclipsed until Sir James Sutherland brought him to the attention of University College London during the centenary of his death. Crabtree's contributions to philosophy, science, art, mathematics, literature, publishing, criminology and brewing, among many others, would have placed him at a pivotal position in the history of the .

Joseph Crabtree's story begins with his birth into a family by in 1754. His early life is marked by a number of interactions with key philosophical and luminary figures of the age, including , who sent the eight-year-old Crabtree's mother a copy of his work on education, "Emile". Aged 14, in , Crabtree accompanied on his first voyage in the "Endeavour" as a "flute boy".

Crabtree purportedly influenced a number of literary luminaries, including Goethe, whom he met in Rome in 1785 while travelling under the name of "Tischbein". This meeting led Crabtree into an affair with Emma Harte, about whom he wrote love poems which Goethe published in German in 1795 under the title of "Erotica Romana". With , he appears to have had a rapport which saw him invited to stay at in 1798, where he also met at the time of the latter's supposed composition of "Kubla Khan", a stay which ultimately led to his persuading Wordsworth to quantify certain lines in "Tintern Abbey" and "The Thorn".