Mars is a borough in Butler County, Pennsylvania, USA. The population was 1,746 at the 2000 census.

According to the United States Census Bureau, the borough has a total area of 0.4 square miles (1.0 km2), all of it land.

The borough of Mars was founded in 1873, and is situated about halfway between the cities of Pittsburgh and Butler. The small community is nestled in a small valley along Breakneck Creek with PA 228 located about a mile south of Mars, and the Mars-Evans City Road located to the north. It is home to the popular roadside attraction, the Mars "Spaceship" or "Flying Saucer"[1].

The Spaceship in Mars, PA

It is also home to the Mars Station which is one of the last railroad depots still standing from the now defunct Pittsburgh and Western Railroad.[2]

In 1873, Samuel Parks constructed a home and a water-powered gristmill along Breakneck Creek. Parks then decided to have a post office placed in his home, so he received help from his friend, Samuel Marshall to help establish it. The name of the post office became Overbrook.[3] In 1877, the Pittsburgh, New Castle and Lake Erie Railroad was constructed through Overbrook, and had a station built there. In 1882, the name of the community was changed to Mars since the railroad already had a stop with the name, "Overbrook".[4] No one is sure how the name "Mars" came into being. Some say it was Park's wife who enjoyed astronomy, or it was shortened after Samuel Marshall's name.[5] On March 6, 1895, Mars was incorporated as a borough.

In 1904, the Pittsburgh and Butler Street Railway gained permission from Mars to construct its right-of-way through the borough. The line become part of the Pittsburgh, Harmony, Butler and New Castle Railway in 1917, being renamed Pittsburgh, Mars and Butler Railway. The line closed in 1931.

The USS Mars (AFS-1) was named after the borough. The ship became part of the United States Pacific Fleet in 1963, and was decommissioned in 1998. It was then sunk in 2006 as a target vessel. The bell of the USS Mars was donated to the borough, and has become a permanent memorial in the downtown park. 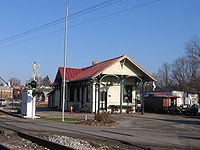 The Mars Area School District serves the boroughs of Mars, and Valencia. It also serves Adams Township and Middlesex Township in Butler County. The Mars Fightin' Planets are one of the many teams located in the north Pittsburgh area. 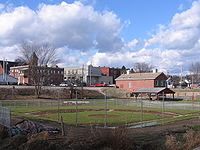 There were 687 households out of which 25.0% had children under the age of 18 living with them, 45.7% were married couples living together, 10.8% had a female householder with no husband present, and 42.4% were non-families. 38.3% of all households were made up of individuals and 24.3% had someone living alone who was 65 years of age or older. The average household size was 2.16 and the average family size was 2.89.

Because of its unique name, and proximity to Pittsburgh, Mars has on occasion received national media attention. In 2011, a representative from The Walt Disney Company invited students from Mars Elementary School to attend the Pittsburgh premiere of Mars Needs Moms, after reading a featured article on Mars, PA by msnbc.com. Mars was the only school nationwide invited to the film's premiere.[7]

The borough has also been a location for films and television commercials. The 1988 comedic drama film, The Prince of Pennsylvania, and the 1996 comedy film, Kingpin were filmed throughout the borough. In 2000, a Kraft salad dressing commercial was filmed in downtown.

Canadian musician John Southworth named his first album Mars, Pennsylvania for the town, which he had passed through many years earlier on a school trip.

Mars has several Christian denominations located within, and just outside the community. One of the largest churches was Saint Kilian Parish. Founded in 1917, the parish was originally located in downtown Mars, but by the early 2000s, membership had swelled so much that a new facility was constructed just outside of the neighboring Seven Fields borough along PA 228 in 2008. There is also a large presence of Presbyterians in the borough. The Mars United Presbyterian was founded in 1969 with the merging of two older churches (one under the United Presbyterian Church of North America, the other under the Presbyterian Church (U.S.A.)). There is also a Lutheran and Methodist church located within the borough. The Woodland Valley Church is one of the newer churches in Mars, and is one of several contemporary churches that have recently started in the Mars/Cranberry area. Others include the Mars Alliance Church, and the Discovery Christian Church which will be built along PA 228 across from the former.[2] The Serbian Orthodox Diocese of Eastern America has its headquarters in Adams Township, near Mars.[8][9]

Residents of Mars are often called "Martians", or "Planets" because of the high school team name. The high school has a homecoming parade every fall. The borough also holds a Fourth of July parade during the holiday, as well as Apple Fest, which is held on the first Saturday of October.

Lakehill Airport is a small airport located about a mile and a half northwest of Mars. It is used for light, private aircraft. The next closest airports are the Butler County Airport and the Zelienople Municipal Airport.

The Buffalo and Pittsburgh Railroad operates on the P&W Subdivision in Mars. It makes occasional rounds to Austin's Bleach in Downieville and to a small transfer with the Allegheny Valley Railroad in Bakerstown. The AVR will also on occasion bring long loads of railcars through Mars to Harmony Junction in Eidenau. This usually occurs when there are too many cars to handle at the transfer point in Bakerstown.