Metro leger's light rail system has its track at surface level generally with its own rail bed, but at key intersections, the system goes underground to avoid congestion or has the right of way. Together with the TGM rail line it is managed by the parastatal transport authority Société des transports de Tunis (Transtu).

While once a number of African cities had traditional electric tram systems, all but the Alexandria Tram and Algiers Tram were discontinued. The Metro leger's modern light rail system is unique for Africa.[1]

By 2006, 136 articulated passenger trams were in operation. They were built by Siemens, and delivered between 1984 and 1997. These trains were related to those used in Hanover Stadtbahn The bi-directional trains are powered via a 750 V dc overhead wire and run on a 1435 mm track. A train consists of two wagons each of which has:

In 2004, an agreement between the French and Tunisian governments led to the order of 30 new Citadis trams built by Alstom. Each train consists of two trams of 64 metre length to hold 208 people standing and 58 sitting. The first such trains started to operate on September 17, 2007.[2] 16 more trams were ordered from Alstom in July 2010.[3]

The trams have a green livery with a white line.

By 2007 the Metro leger comprised a network of 32 kilometers with 47 stations. There is an intersection with the Tunisian Railways at Place de Barcelone and with TGM at Tunis Marine. The lines are (2007): 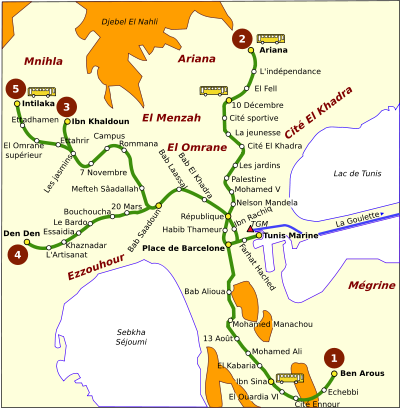 On October 2, 2007 a 2 year project started to extend Line 4 by 5.2 km to reach the Université de la Manouba. Further extensions are planned.

Tunis had an older electric street car system that, like in many cities, eventually was dismantled. With the growth of the Tunis area the need for a commuter transportation system became evident leading to the decision to link the city with its suburbs by a modern light rail system. The system was delivered as a turnkey operation by a consortium led by Siemens.[1] The Société du métro léger de Tunis (SMLT) was founded in 1981 to manage the operation. Construction on Line 1 started the same year and was completed by 1985 when passenger service commenced. In 1989 Line 2 was placed into operation, and Line 3 and 4 followed the next year. Line 5 became operative in 1992; the same year Line 3 was extended to its current length. In 1997 the extension of Line 4 was inaugurated, and further construction for an extension to La Manouba was started in 2007 . The Société des transports de Tunis took over management in 2003; it was formed by joining the SMLT and the Société nationale de transports (SNT, founded in 1963) that was responsible for the TGM railway. A new Line 6 is planned to link Tunis with El Mourouj and its construction began in 2005. New Citadis trains from Alstom to supplement the earlier Siemens trains were introduced in 2007.