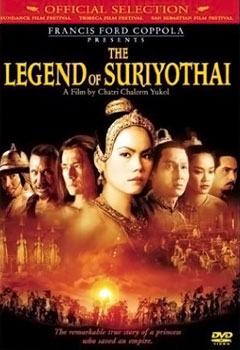 The Legend of Suriyothai is a Thai film directed by , telling the history of , who died in a battle in against Burmese invaders. Taking her battle elephant in front of the Burmese army, Suriyothai sacrificed herself to save the life of her King , and his kingdom.

The film follows the dramatic course of the life of Suriyothai from her adolescence to her death. It presents a young woman of minor royal standing who has strong opinions and a great deal of self-determination. She loves Lord Piren, but is promised to Prince Tien, the son of the second king of the realm. In an attempt to escape a marriage she does not want she runs away and is captured by the principal king who explains the possible problems her marriage to Piren might cause to Siam. For the good of the kingdom, she marries Tien to keep peace in the royal families. From this point on she remains loyal to the man she likes but does not love, and is far from being his puppet.

The principal king dies, and Tien's father inherits the throne. He has a young son whose mother is the principal consort. A few years later, makes its first appearance in Siam and the king is stricken with the disease. On his deathbed he extracts a promise of support for his young son from Chai Raja, his nephew, and Tien, who was born to a concubine. invades in the north and Chai Raja assumes the throne in order to protect Siam. He executes the child king, which Tien protests but on Suriyothai's advice accepts his cousin as his ruler.

Chai Raja's wife, Queen Jitravadee, dies shortly after giving birth to the heir Yodfa. The king takes a new consort, Srisudachan, and has another son by her. After several years of peace, Chai Raja leaves the capital, Ayutthaya, for a military campaign in the north. Soon after, Srisudachan, descended from the deposed U-Tong dynasty, takes Boonsri Worawongsa, another U-Tong descendant, as a lover and starts plotting to take over the throne.

The king is wounded in battle and comes back to the capital to recuperate, where Srisudachan poisons him and attempts to blame the deed on Tien. Tien saves his own life by becoming a monk. Srisudachan proceeds by naming Worawongsa as regent and promptly poisoning young Yodfa, thereby assuming power. Suriyothai then summons her old friend Piren, who was Chai Raja's troop commander, to help set things right. His troops ambush and kill Worawongsa and Srisudachan, and Tien accepts the throne despite his monkhood.

Upon hearing this, Burmese King Hongsa invades again and lays siege to Ayutthaya. In a desperate attempt to boost the morale of their troops, both the un-warlike King Tien and Queen Suriyothai join the battle. The queen is slain, falling in slow motion from the elephant in full uniform with her throat cut.

The film was financed by Queen Sirikit. The director, Chatrichalerm, himself a distant relative of Queen Sirikit, brings to life a glorious past of court drama, betrayal, fluid alliances, and huge gory battles.

Chatrichalerm wrote the screenplay and directed. Kamla, Yukol’s wife, designed the costumes and served as producer. All props were created for the film, including authentic reproductions of 16th century European, Thai and Burmese weapons.

Because of Queen Sirikit's backing of the film, when the script called for a large number of men in the battle scenes, and personnel were called upon to help make up the thousands of extras required.

Chatrichalerm states that this film was originally the idea of Queen Sirikit. Thai schools no longer teach history with the same detail that they once did. The Queen wanted the Thai people to have a better understanding of their history and felt that a motion picture would be a good way to accomplish this. Chatrichalerm and Queen Sirikit mutually agreed to use "Suriyothai" as their first subject. A follow-up film on King , "King Naresuan" is being released in 2007. A trilogy, it is even grander in scale and scope than "Suriyothai".

Since many of the "sets" in "Suriyothai" are actual locales, the true grandeur of Thai palaces and royal households can be clearly seen. With elaborate carvings and gold leaf adorning virtually every piece of furniture, the movie presents a grand and prosperous view of Thai royalty in the 16th century.

The movie is noted by many in the film industry for its grandeur and scope. The palaces and homes of the royals are richly decorated. The battle scenes employed thousands of extras and there are hundreds of real elephants used as moving battle platforms.

This film, the most ambitious of the Thai cinema to date, required five years of archaeological and historical research and took more than two years to shoot. It is rumored that the film cost between 8 and 20 million US dollars, making it the most expensive Thai film ever made. However, due to the involvement of the , any figure is hard to substantiate. Additionally, the royal family’s association with this motion picture allowed filming in locations that would have been difficult or even impossible for any other director to have access to.

When the film was released on , in Thailand, it was entitled simply "Suriyothai" and had a running time of 185 minutes. This is pared down quite a bit from its intended eight-hour length. A five-hour version exists in a DVD box-set released in Thailand.

In 2003, the film was released in the , with a running time of 142 minutes. This version was edited by , an old classmate of Chatrichalerm's from . The US release by was entitled "Francis Ford Coppola Presents: The Legend of Suriyothai". Some critics argue that the original Thai release was the better presentation of the film, with still others even preferring the five-hour DVD set.

The film stars another Thai royal, , as Queen Sri Suriyothai. She is a royal descendant, carrying the title M.L., or Mom Luang.

Thai pop star is among the highlighted performers, portraying the scheming Lady Srisudachan with gusto. Other cast members include as Prince Thien, as Lord Piren and as Lord Worawongsa.

Numerous other actors and actresses from Thai film history appear, including action-movie veteran and , who appeared in many of Chatrichalerm's films in the 1970s and 1980s.