The MISSE project evaluates the performance, stability, and long-term survivability of materials and components planned for use by NASA, commercial companies and the Department of Defense (DOD) on future low Earth orbit (LEO), synchronous orbit and interplanetary space missions. The Long Duration Exposure Facility (LDEF), which was retrieved in 1990 after spending 68 months in LEO, revealed that space environments are very hostile to many spacecraft materials and components. Atomic oxygen, which is the most prevalent atomic species encountered in low earth orbit, is highly reactive with plastics and some metals, causing severe erosion.

There is also extreme ultraviolet radiation due to the lack of an atmospheric filter. This radiation deteriorates and darkens many plastics and coatings. The vacuum in space also alters the physical properties of many materials. Impacts of meteoroids and orbiting man-made debris can damage all materials exposed in space. The combined effects of all of these environments on spacecraft can only be investigated in space. MISSE evaluates materials currently being used and those planned for use in future space missions.[1]

MISSE is a direct successor of the Mir Environmental Effects Payloads (MEEP) that were attached for over a year to the Mir Docking Module of the space station Mir between shuttle flights STS-76 and STS-86;[2] and is a descendant of the Long Duration Exposure Facility. Also MEEPS can trace their inception to the Passive Optical Sample Array (POSA) sample trays flown on STS-1 and STS-2, and their successor Effects of Oxygen Interaction with Materials (EOIM) on STS-3 and STS-5. 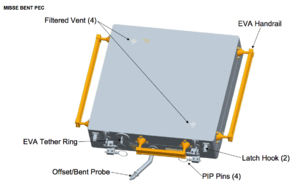 About 1,508 samples are being tested on the MISSE project. Samples range from components such as switches, sensors and mirrors to materials like polymers, coatings, and composites. There are also biological materials such as seeds, spores and various types of bacteria being evaluated. Each material on the mission had to be individually tested in the laboratory prior to being selected. The ultimate test for the materials is when they are exposed to the space environment. In the laboratory, each material can only be exposed to one particular simulated environment at a time. In space, they are exposed to all of the environments at once. Besides testing new materials, MISSE will also be addressing questions concerning current materials, such as those being used in communication satellites which are being plagued with premature failures of the solar cell power arrays. New generations of solar cells with longer expected lifetimes will also be tested.

MISSE will also be testing coatings used to control heat absorption and emission temperatures of satellites. The hostile environment of space limits the useful life of currently used coatings. New coatings, which are expected to be much more stable in space and therefore have longer useful lives, will be tested. MISSE will also address a major problem for a manned exploration of Mars: shielding the crew from the very energetic cosmic rays found in interplanetary space. New concepts for lightweight shields will be tested on MISSE. Ultra-light membrane structures are planned for solar sails, large inflatable mirrors and lenses. The effects of micrometeoroid impacts on these materials will also be investigated.[1]

The materials selected for the mission are placed into suitcase-like Passive Experiment Containers (PECs). The PECs are used for transporting experiments to and from ISS. During an EVA they are placed on handrails or at an exposed experiment facility of the ISS. The experiments are photographed several times during their stay outside if possible, usually whenever an opportunity arises due to a scheduled EVA. After exposure in space, MISSE is retrieved in the same manner as it was deployed, the material samples are tested to see if they still have the unique properties needed to complete space missions. MISSEs have active and passive detectors to give a time-history reading, or a reading of what happened to the materials at certain points in time. Back on the ground, tests will be conducted to determine the effects of its exposure. These tests will determine which materials are strong enough to survive in space.

Originally it was planned to have MISSE-1 and 2 deployed for about a year and MISSE-3 and 4 for up to three years. Due to the grounding of the shuttle fleet after the Space Shuttle Columbia disaster required that changes be made to these plans. MISSEs 1 and 2 provided the three-year data and MISSEs 3 and 4 have provided the one-year data.[3]

The first and second set of experiments was launched by Space Shuttle Discovery, during mission STS-105, on 10 August 2001 and contained 910 specimens of various materials.[4] It was installed in two separate airlock handrails located on the Quest Joint Airlock and high-pressure gas tanks.[5]

This was the third MISSE experiment launched, although the fifth MISSE PEC. MISSE-5 was launched by Space Shuttle Discovery on mission STS-114, on 26 July 2005 and contained 254 specimens of various materials.[7] It was installed on the P6 truss and a year later, during the third EVA of mission STS-115 on 15 September 2006, the MISSE-5 package was retrieved.[8]

MISSE-5 contained three investigations. One experiment the Forward Technology Solar Cell Experiment (FTSCE), a performance test of 36 solar cells for use on future spacecraft. The second investigation measured the degradation of more than 200 flexible materials in the space environment. The third experiment involved the PCSat-2 that provided a communications system and tested the Amateur Satellite Service off-the-shelf solution for telemetry command and control. MISSE-5 was the first active experiment of the MISSE series. It required power and could communicate with the ground through PCSat-2.[9]

The fourth and fifth set of MISSE experiments (MISSE PEC3 and MISSE PEC4) were launched by Space Shuttle Discovery, during mission STS-121, on 3 August 2006 and contained 875 specimens of various materials.[10] The MISSE-3 was installed on one of the high-pressure tanks around the crew lock and the MISSE-4 on the outboard end of the Quest Joint Airlock by the Expedition 13's crew.[11] A year later, during the fourth EVA of mission STS-118 on 18 August 2007, the MISSE-3 and 4 experiments were retrieved.[12]

MISSEs 3 and 4 also served an educational purpose, it flew approximately eight million basil seeds that were given to children for science experiments, in order to stimulate interest in space science.[3]

The sixth set of MISSE experiments, labeled 6A and 6B, were launched by Space Shuttle Endeavour, during mission STS-123, on 13 March 2008 and contain over 400 specimens of various materials.[13] It was installed on the Columbus External Payload Facility. Installation was attempted during the third EVA, however the case did not initially fit onto the bracket.[14] It was successfully installed during the fifth EVA.[15]

The seventh set of MISSE experiments was located on ExPRESS Logistics Carrier 2.[18] They were brought to the station in November 2009 aboard mission STS-129.

MISSE-7 is composed of two suitcase-sized Passive Experiment Containers (PECs), identified as MISSE 7A and MISSE 7B. Once installed in the exterior of ISS by space walking astronauts, the PECs were opened. The orientation of MISSE 7A was space facing/Earth facing while MISSE 7B faced forward/backward relative to the ISS orbit. Both MISSE 7A and MISSE 7B contained active and passive experiments. Passive experiments are designed for pre- and post-flight evaluation in ground-based laboratories. Being a first in the MISSE program, active experiments are designed to interface with the power and communication systems on ISS allowing data to be transmitted back to Earth.

MISSE-7 also contained experiments mounted to its ExPA base. These experiments included SpaceCube which was developed by engineers at the NASA Goddard Space Flight Center and is a reconfigurable, high-performance system based on Xilinx's Virtex-4 commercial FPGAs designed for spaceflight applications requiring compute intensive on-board processing. The MISSE-7 SpaceCube’s purpose was to serve as an “on-orbit” test-bed for demonstrating “radiation hardened by software” program execution and error detection and correction techniques that will help enable the use of commercial processing devices in space.[19]

The two PECs were collected for return to Earth during the STS-134 mission.

On STS-134 MISSE-8 was only one PEC, STS-135 crewmen added the MISSE-8 ORMatE-III exposure plate to the second MISSE mount.