Hinduism is a minority religion in Malaysia. An estimated 7.1% of the total population of Malaysia are ethnic Indians, of whom 89% are practicing Hinduism.[1] Most of the ethnic Indians are Tamils from the south Indian state of Tamil Nadu. In addition there is a 350,000 strong population of people of Muslim Pakistanis and Bangladeshis and 250,000 Tamil Muslims.

Similar to the Indonesian Archipelago, the native Malays practiced an indigenous animism and dynamism beliefs before the arrival of Buddhist and Hindu influence and the subsequent adoption of Islam by the native Malays.

Arrival of Buddhism followed by Hinduism 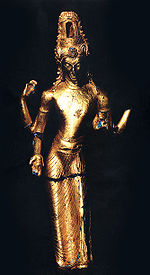 A golden statue of Avalokiteçvara dating back from the Srivijayan Empire, discovered in Jambi, Indonesia. 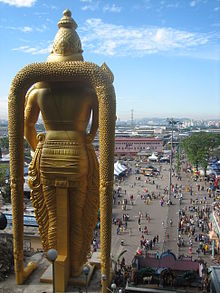 There is no definite evidence which dates the first Indian voyages across the bay of Bengal but conservative estimates place the earliest arrivals to Malay shores at least 1,700 years ago.[2] The growth of trade with India brought coastal people in much of the Malay world into contact with Hinduism. Thus, Hinduism, Indian cultural traditions and the Sanskrit language began to spread across the land. Temples were built in the Indian style and local kings began referring to themselves as Raja and more desirable aspects of Indian government were adopted.[3]

Indian settlers came to Malaya from Tamil Nadu in the late 19th and early 20th centuries. Many of these came to work as labourers on rubber plantations, while those who were English-educated occupied more professional positions. A minority of Indian immigrants to Malaysia during this time period came from Northern India and Sri Lanka.

Malaysian Hinduism is diverse, with large urban temples dedicated to specific deities, and smaller temples located on estates. The estate temples generally follow the tradition of the Indian region from which the temples' worshippers originate. Many people follow the Shaivite, or Saivite, tradition (worship of Shiva), of Southern India. However, there are also some Vaishnava Hindus in Malaysia as well, many of them of North Indian extraction, and these Hindus worship in temples such as the Geeta Ashram in Seksyen 52, Petaling Jaya, or the Lakshmi-Narayan Temple in Kampung Kasipillay, Kuala Lumpur. Services in these temples are usually conducted in Hindi and English.

Folk Hinduism is the most prevalent variety, including spiritualism and worship of local gods.

The International Society for Krishna Consciousness also has a number of followers in Malaysia, and maintains temples in Kuala Lumpur and also all over Malaysia. The Ratha-Yatra festival is held once a year in every temple through out Malaysia approximately 10 to 12 Ratha Yatra which will be held usually end of the Year, when the Deities of Lord Jagannath, Baladeva and Subhadra are placed on a chariot which is pulled through the streets by devotees, accompanied by a party chanting the Hare Krishna Mahamantra. There also another group of Hare Krishna such as (The follower of ritvik,follower of Hansa Duta) There is also gaudiya math and saraswath math.... basically they sampradayaa and the Hare Krishna are same only some minor differencec.

There are also few devotees of Sri vaishnava(Ramanucharya)and Madhva Sampradayaa.. There are also a few followers of Sai Baba,Satya Sai Baba

Since the Second World War a revival of Hinduism has occurred among Indian Malaysians, with the foundation of organisations and councils to bring unity or to promote reform.

Some of the major Hindu festivals celebrated every year include Deepavali, Thaipusam. 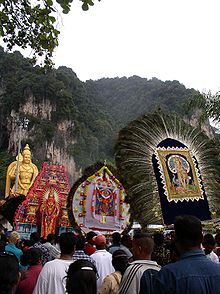 After a violent conflict in Penang between Hindus and Muslims in March 1998, the government announced a nationwide review of unlicensed Hindu temples and shrines. However, implementation was not vigorous and the program was not a subject of public debate.

Between April to May 2006, several Hindu temples were demolished by city hall authorities in the country, accompanied by violence against Hindus.[5] On April 21, 2006, the Malaimel Sri Selva Kaliamman Temple in Kuala Lumpur was reduced to rubble after the city hall sent in bulldozers.[6] The authorities' excuse was that these temples were unlicensed and squatting on government land.

The president of the Consumers Association of Subang and Shah Alam in Selangor had been helping to organise efforts to stop the local authorities in the Muslim dominated city of Shah Alam from demolishing a 107-year-old Hindu temple. The growing Islamization in Malaysia is a cause for concern to many Malaysians who follow minority religions such as Hinduism.[7]

On May 11, 2006, armed city hall officers from Kuala Lumpur forcefully demolished part of a 90-year-old suburban temple that serves more than 3,000 Hindus. The "Hindu Rights Action Force", a coalition of several NGO's, have protested these demolitions by lodging complaints with the Malaysian Prime Minister.[8]

Many Hindu advocacy groups have protested what they allege is a systematic plan of temple cleansing in Malaysia. The official reason given by the Malaysian government has been that the temples were built "illegally". However, several of the temples are centuries old.[8]

According to a lawyer for the Hindu Rights Action Task Force, a Hindu temple is demolished in Malaysia once every three weeks.[9]

In 2007, Malaysian Hindu organizations protested the destruction of Hindu temples by the Malaysian regime. On October 30, 2007 the 100-year-old Maha Mariamman Temple in Padang Jawa was demolished by Malaysian authorities. Following that demolition, Works Minister and head of the Malaysian Indian Congress Samy Vellu, who is of Indian origin, said that Hindu temples built on government land were still being demolished despite his appeals to the various state chief ministers.

Such temple destructions in Malaysia have been reported by the Hindu American Foundation.[10]

HAF notes that the Government of Malaysia Restricts Freedom of Peaceful Assembly and Association contrary to Article 20 of the Universal Declaration of Human Rights (1948) and Article 10 of the Malaysian Federal Constitution, and that the application filed by Malaysian Hindus to hold gatherings have been arbitrarily denied by the police. The Government has also tried to suppress a campaign launched by an NGO, the Hindu Rights Action Force (HINDRAF) to obtain 100,000 signatures in support of a civil suit against the Government of United Kingdom.[10] HINDRAF has accused the Malaysian government of intimidating and instilling fear in the Indian community.[11]

The Hindraf rally prompted the Malaysian government to open dialogue with various Indian and Hindu organizations like the Malaysia Hindu Council, Malaysia Hindudharma Mamandram, and Malaysian Indian Youth Council (MIYC) to address the misgivings of the Indian community.[12] HINDRAF itself has been excluded from these talks and no significant changes have resulted from the discussions.

The Cow head protests was a protest that was held in front of the Selangor state government headquarters at the Sultan Salahuddin Abdul Aziz Shah Building, Shah Alam, Malaysia on August 28, 2009. The protest was called so because the act of a few participants who brought along a cow head, which they later "stomped on the head and spat on it before leaving the site".[13] The cow is considered a sacred animal to Hindus.

The protest was held due to Selangor state government's intention to relocate a Hindu temple from Section 19 residential area of Shah Alam to Section 23. The protesters were mainly Muslim extremists who opposed the relocation due to the fact that Section 23 was a Muslim majority area.

The protest leaders were also recorded saying there would be blood if a temple was constructed in Shah Alam.[14] The protest was caught on video by the popular Malaysian online news portal Malaysiakini.[15]

Laws in the country, especially those concerning religious identity, are generally slanted towards compulsion into converting to Islam[16]

In August 2010, a Malaysian woman named Siti Hasnah Banggarma was denied the right to convert to Hinduism by a Malaysian court. Banggarma, who was born a Hindu, but was forcibly converted to Islam at a young age, desired to reconvert back to Hinduism and appealed to the courts to recognize her reconversion. The appeal was denied.[17]