The obligation to serve in the militia in England derives from a common law tradition, and dates back to Anglo-Saxon times. The tradition was that all able-bodied males were liable to be called out to serve in one of two organisations.These were the posse comitatus, an ad hoc assembly called together by a law officer to apprehend lawbreakers, and the fyrd,[1] a military body intended to preserve internal order or defend the locality against an invader. The latter developed into the militia, and was usually embodied by a royal warrant.[2] Obviously, service in each organisation involved different levels of preparedness.[3]

With the decay of the feudal system and the military revolution of the sixteenth century, the militia began to become an important institution in English life. It was organized on the basis of the shire county, and was one of the responsibilities of the Lord Lieutenant, a royal official (usually a trusted nobleman). Each of the county hundreds was likewise the responsibility of a Deputy Lieutenant, who relayed orders to the justices of the peace or magistrates. Every parish furnished a quota of eligible men, whose names were recorded on muster rolls. Likewise, each household was assessed for the purpose of finding weapons, armour, horses, or their financial equivalent, according to their status. The militia was supposed to be mustered for training purposes from time to time, but this was rarely done. The militia regiments were consequently ill-prepared for an emergency, and could not be relied upon to serve outside their own counties.

This state of affairs concerned many people. Consequently, an elite force was created, composed of members of the militia who were prepared to meet regularly for military training and exercise. These were formed into trained band regiments, particularly in the City of London, where the Artillery Garden was used as a training ground. The trained bands performed an important role in the English Civil War on the side of parliament, in marching to raise the siege of Gloucester (5 September 1643).

Except for the London trained bands, both sides in the Civil War made little use of the militia, preferring to recruit their armies by other means.

Militia in the English Empire 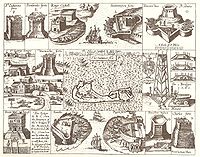 Captain John Smith's 1624 map of the Somers Isles (Bermuda), showing St. George's Town and related fortifications, including the Castle Islands Fortifications with their garrisons of militiamen.

Successful English settlement of North America, where little support could be provided by regular forces, began to take place in 1607, in the face of Spain's determination to prevent England establishing a foothold in territory it claimed for itself. The settlers also had to contend with frequently, and justifiably, hostile native populations. It was immediately necessary to raise militia amongst the settlers. The militia in Jamestown saw constant action against the Powhatan Federation and other native polities. In the Virginia Company's other outpost, Bermuda, settled officially in 1612 (unofficially in 1609), the construction of defensive works was placed before all other priorities. A Spanish attack in 1614 was repulsed by two shots fired from the incomplete Castle Islands Fortifications manned by Bermudian Militiamen. In the Nineteenth century, Fortress Bermuda would become Britain's Gibraltar of the West, heavily fortified by a Regular Army garrison to protect the Royal Navy's headquarters and dockyard in the Western Atlantic. In the 17th Century, however, Bermuda's defence was left entirely in the hands of the Militia. In addition to requiring all male civilians to train and serve in the militia of their Parish, the Bermudian Militia included a standing body of trained artillerymen to garrison the numerous fortifications which ringed New London (St. George's). This standing body was created by recruiting volunteers, and by sentencing criminals to serve as punishment. The Bermudian militiamen were called out on numerous occasions of war, and, on one notable occasion, to quell rioting privateers. In 1710, four years after Spanish and French forces seized the Turks Islands from Bermudian salt producers in 1706, they were expelled by Bermudian militia. By this time, the 1707 Acts of Union had made Bermudian and other English militiamen British.

Up until the Glorious Revolution in 1688, the Crown and Parliament were in strong disagreement. The English Civil War left a rather unusual military legacy. Both Whigs and Tories distrusted the creation of a large standing army not under civilian control. The former feared that it would be used as an instrument of royal tyranny. The latter had memories of the New Model Army and the anti-monarchical social and political revolution that it brought about. Consequently, both preferred a small standing army under civilian control for defensive deterrence and to prosecute foreign wars, a large navy as the first line of national defence, and a militia composed of their neighbours as additional defence and to preserve domestic order.

Consequently, the English Bill of Rights (1689) declared, amongst other things: "that the raising or keeping a standing army within the kingdom in time of peace, unless it be with consent of Parliament, is against law..." and "that the subjects which are Protestants may have arms for their defense suitable to their conditions and as allowed by law." This implies that they are fitted to serve in the militia, which was intended to serve as a counterweight to the standing army and preserve civil liberties against the use of the army by a tyrannical monarch or government.

The Crown still (in the British constitution) controls the use of the army. This ensures that officers and enlisted men swear an oath to a politically neutral head of state, and not to a politician. While the funding of the standing army subsists on annual financial votes by parliament, the Mutiny Act is also renewed on an annual basis by parliament[citation needed]. If it lapses, the legal basis for enforcing discipline disappears, and soldiers lose their legal indemnity for acts committed under orders[citation needed].

Eighteenth century and the Acts of Union

In 1707, the Acts of Union united the Kingdom of England with the Kingdom of Scotland. The Scottish navy was incorporated into the Royal Navy. The Scottish military (as opposed to naval) forces merged with the English, with pre-existing regular Scottish regiments maintaining their identities, though command of the new British Army was from England. How this affected militias either side of the border is unclear.