Something's Got to Give

Something's Got to Give 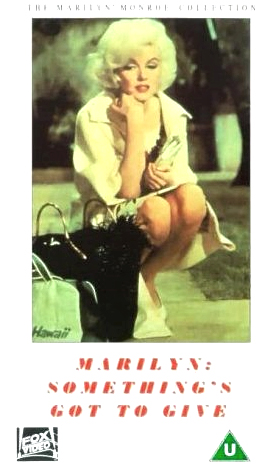 "Something's Got to Give" is one of the most notorious unfinished films in history. The light bedroom comedy, a remake of "", was produced in 1962 by a then-floundering . The film paired with and . With a troubled star and belligerent director, , causing delays on a daily basis the film quickly descended into a costly debacle. Because of costly delays, Monroe was fired and the film cancelled resulting in the being shelved in the studio's vaults. Marilyn Monroe spiralled further into decline and ultimately her death.

Ellen Arden (Monroe), mother of two small children, was a photographer on a trans-pacific yacht race when she was swept overboard. After an exhaustive search her husband Nick (Dean Martin) has her declared dead. On the day her husband is married to Bianca (Cyd Charisse) she returns home after having been rescued from an island where she has been marooned for 5 years. Nick learns that she was marooned on the island with Stephen Burkett () known as "Adam" to her "Eve". To allay Nick's fears Ellen enlists a meek shoe salesman () to impersonate her island companion. [De La Hoz, Cindy: "Marilyn Monroe - Platinum Fox", Page 232, "Running Fox". ISBN-10: 0-7624-3133-4.]

Several weeks before principal photography began, the cast and crew gathered for wardrobe tests on a set that was a fully-lit recreation of 's home. Production designer had sent a crew of men to Cukor's home to photograph the entire estate. According to Allen, Cukor was photographed in the set's courtyard, with the intent of using the photo as his 1962 Christmas card, but is said to have abandoned the idea after Monroe's death on August 5th.

Marilyn Monroe had been absent from the screen for over a year. She had, at the time, recently undergone surgery, and had dropped over 25 pounds, reaching the lowest weight of her adult life. The baby fat was gone, according to her costumer, . The costume and hairstyle drawings depicted a new Monroe, much more sophisticated and stylish than any character depicted previously. Monroe wore some of her own clothes, and some of those commissioned by Fox for the film. She posed before the cameras for six hours of tests. She wore a long blonde wig meant for the beginning of the film, a two-piece black wool suit (also worn in "Let's Make Love"), a black and white silk dress, and a lime green bikini with a bottom designed to cover her navel.

Before shooting had begun, Monroe had let producer know that she had been asked by the to perform for President at in honor of his birthday on , . The producer granted her permission to attend the gala believing there would be no problems on the set.

On the first day of production, , , Monroe telephoned Weinstein to tell him that she had a severe sinus infection, and would not be on the set that morning. Apparently, she had caught the infection after a trip to during which she had visited her acting coach, of , to go over her role. The studio sent staff doctor to examine the star at her home. His diagnosis would have postponed the movie for a month, but George Cukor refused to wait.

Instead, Cukor reorganized his shooting schedule to film scenes around his leading lady. At 7:30 am, Cyd Charisse was telephoned at her residence with a request that she come to the Fox lot as soon as possible. Later that morning, the very first scene captured on film involved Martin's character and Charisse, in an encounter with children building a tree house.

Over the next month production continued mostly without Monroe, who showed up only occasionally. The production began to fall behind schedule. As Kennedy's birthday approached, no one on the production thought Monroe would keep her commitment to the White House and miss almost a week of shooting, but she did. Studio documents released after Monroe's death confirmed that her appearance at the political fundraising event was approved by Fox executives.

By this time the production was way over budget, and there still wasn't a totally usable script despite writer Walter Bernstein's efforts. The continual script rewrites aggravated Monroe's well known problems with memorizing dialogue. Monroe seemed very deeply introspective and would spend all of her free time on the set in her dressing room with Lee Strasberg's wife, Paula. It was she whom Marilyn depended on for support and direction during a shoot, not the director.

Upon her return from New York, Monroe decided to give the film a publicity boost by doing something no other major Hollywood actress had done before. There was a scene where she was to jump into a swimming pool at night and try to lure Dean Martin's character away from Cyd Charisse's character. "Come on in, the water's so refreshing, after you've done — oh you know!" she playfully calls up to his bedroom window. Martin tells her to get out of the pool and then realizes she is nude. A body stocking was made for her, but Monroe, in a calculated move, took it off and swam around in only a flesh-colored bikini bottom. [ [http://www.geocities.com/melaniumom2/SGTG22.html Something's Got to Give ] ] The entire set was closed down to all but necessary crew. Still, Monroe had asked photographers to come in, like . For a still photo session after filming was completed, she was photographed both with and without even the bikini bottom. [ [http://www.geocities.com/melaniumom2/SGTG28.html Something's Got to Give ] ]

Monroe's last day on the set

On , Monroe, Martin and shot a scene in the courtyard set. The day marked Monroe's 36th birthday, though the studio didn't even buy a cake. Monroe's stand-in, Evelyn Moriarty, bought a seven dollar at the Los Angeles Farmer's Market. A studio illustrator drew a cartoon of a nude Monroe holding a towel which read "Happy Birthday Suit". This was to be used as a birthday card, the cast and crew signed it. The cast attempted to celebrate when Marilyn arrived; however Cukor blew up and insisted they wait until 6 pm because, he "wanted to get a full day's work out of this woman." It would be Monroe's last day on the set. She left the party with co-star . She borrowed the fur trimmed suit she had worn while filming that day because she was to attend a fund raiser at that evening with her former husband and co-star Dean Martin's young son.

On Monday morning, producer Henry Weinstein got the call he dreaded. Monroe was on the other line telling him she wouldn't be there again that day. The cold night air of the Dodgers game had caused a flare up of the sinusitis, and her temperature had spiked to 100 F. A meeting of studio suits quickly assembled. Cukor strongly endorsed her release from the picture. Marilyn's absence of 17 out of 30 shooting days led to her termination from the project on Friday, , . Life magazine featured Marilyn, wrapped in a blue terrycloth robe, on its , cover with the headline, "The skinny dip you'll never see."

The decision to fire Monroe was triggered by the high cost of Fox's epic film "Cleopatra", also in production that summer and far over its budget. Its star, , was creating problems on location in Rome. She was being paid one million dollars for her performance, setting a record for the highest star salary to date. Taylor also required expensive perks, including a chauffered Rolls-Royce. Executives at Fox had planned for a Christmas holiday release for "Something's Got To Give" to provide much-needed revenue to compensate for the escalating cost of "Cleopatra." In fact, Fox's financial turmoil resulted in the studio selling its back lot and various other properties. Unfortunately, "Cleopatra" failed at the box office, and Fox would not recover until the successful release of "The Sound of Music" in 1965.

Monroe rebounded with interviews and photo essays for "Life", "Cosmopolitan", and "Vogue" magazines. The "Life" interview with Richard Meryman, released on 1962 included her reflections on the positive and negative aspects of fame. "Fame is fickle," Monroe asserted, clearly reeling from her termination from the film. "I now live in my work and in a few relationships with the few people I can really count on. Fame will go by, and so long, I've had you, fame. If it goes by, I've always known it was fickle. So, at least it's something I experienced, but that's not where I live."

Monroe was to be replaced with actress , who was fitted into Monroe's costumes and photographed with Cukor. But Dean Martin had leading lady approval and stated, "No Marilyn, no picture." The project seemingly ended there.

Realizing they had thrown $2 million away, Fox decided to re-hire Monroe. They agreed to pay her more than her previous salary of $100,000; however she had to agree to make two more films for Fox. She accepted the offer on the condition that George Cukor be replaced with , who had directed her in "".

Plans to resume filming in October were abandoned when Monroe died on 1962.

In April 1963, Fox released the 83-minute documentary "Marilyn" which included brief clips from the screen-tests and unfinished film showing Monroe. For years this was the only footage seen by the public.

Fox later produced another version of the script, more closely resembling the original 1940 film, but it utilized some of the sets from the abandoned version, as well as costumes (with variations) and hair styles designed for Monroe. Titled "" and starring , and , it was released in December 1963.

Nine hours of footage from the film sat in the vaults at 20th Century Fox until 1999, when it was digitally restored by and reconstructed into a semi-coherent, 37-minute segment for the two-hour documentary, "Marilyn: The Final Days". It first aired on American Movie Classics on , , which would have been Monroe's 75th birthday. [De La Hoz, Cindy: "Marilyn Monroe - Platinum Fox", Page 241 "Running Fox". ISBN-10: 0-7624-3133-4.] It is available on DVD.