The Ordnance QF 2-pounder (or simply "2 pounder gun") was a 40 mm (1.575 in) British anti-tank and vehicle-mounted gun, employed in the Second World War. It was actively used in the Battle of France, and during the North Africa campaign. As tanks became sufficiently armoured to stand up to its shots, it was gradually replaced by the 6-pounder, starting in 1942, though some remained in service until the end of the war. In its vehicle-mounted variant, the 2-pounder was also a common main gun on British tanks early in World War II, and was a typical main armament of armoured cars such as the Daimler throughout the war.

The gun was initially developed as a tank weapon, and made its debut as the main armament of the Vickers-designed Cruiser Tank Mk I. For reasons of economy and standardization, the Director of Artillery accepted it as a basis for an anti-tank gun in October 1934. Contracts to design a carriage were given to Vickers and the Woolwich Arsenal.

Vickers was the first to submit a design, which was accepted as the Ordnance QF 2-pounder Mark IX on Carriage Mark I. A limited number of pieces were built in 1936. The carriage had an innovative three-legged construction. In the traveling position, one of the legs was used as a towing trail, and the other two were folded. When the gun was positioned for combat, the legs were emplaced on the ground and the wheels were lifted up. Woolwich Arsenal's carriage was found to be cheaper and easier to produce than the Vickers design, and with the gun was adopted as Ordnance QF 2-pounder Mark IX on Carriage Mark II. It was conceptually similar, although when the gun was emplaced for combat the wheels had to be removed. This carriage was also manufactured by Vickers.

The unusual construction gave the gun good stability and a traverse of 360 degrees, allowing it to quickly engage moving vehicles from any approach. With the Vickers carriage, the gun could also be fired from its wheels, at the expense of limited traverse. The 40 mm 2-pounder could outperform a typical 37 mm piece such as the German 3.7 cm PaK 36 or the Bofors 37 mm, and hugely outclassed smaller 25 mm and 20 mm weapons used by some forces. On the negative side, the 2-pounder was nearly twice as heavy as PaK 36, and had a higher profile.

One interesting late-war project was the David High Velocity, a Canadian development that allowed 2-pdr ammunition to be fired from the larger-calibre 6-pdr. This was intended to improve the muzzle velocity of the shot. The system was still being developed when the war ended, the program ending along with it.

An example of an Irish Army QF 2 pdr resides in the museum in Collins Barracks in Cork City. 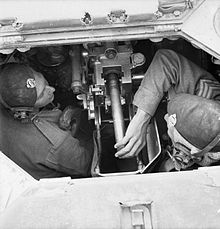 Australian 2 pounder crew firing on Japanese tanks at Point-blank range in the Battle of Muar. 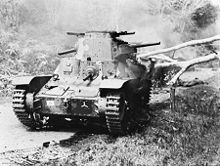 In the early western campaigns the 2-pdr was employed by two types of Royal Artillery formations: anti-tank regiments of infantry divisions (four batteries with 12 pieces each), and light anti-aircraft/anti-tank regiments of armoured divisions (two 12-gun AT batteries). From October 1940, separate 48-gun anti-tank regiments were introduced in armoured divisions too. Infantry brigade structure initially included an anti-tank company, though it was typically equipped with 25 mm Hotchkiss anti-tank guns; these companies were disbanded later in the war. From 1942, infantry battalions received their own six-gun anti-tank platoons. The organization was different in the Far East theatres. The exact internal structure of AT units was also subject to changes and variations.

The gun first saw combat during the German invasion of the Low Countries, with the Belgian Army, and then with the British Army during the subsequent rear-guard actions at Dunkirk. Most of the British Army's 2-pdrs were left behind in France during the retreat, stripping most of the army's infantry anti-tank capability. Those guns captured at Dunkirk entered German service under the designation 4.0 cm Pak 192 (e) or 4.0 cm Pak 154 (b), the "e" and "b" referring to England and Belgium respectively.

Although the Woolwich Arsenal had already designed a successor to the 2-pdr, the 6 pounder gun, it was decided in the face of a likely German invasion to re-equip the army with the 2-pdr, avoiding the period of adaptation to production, and also of re-training and acclimatization with the new weapon. This had the effect of delaying production of the 6 pounder until November 1941, and it was only in spring 1942 when the new gun reached frontline units. As such, for most of the North African campaign, the army still had to rely on the 2-pdr, aided by the 25 pounder gun-howitzer functioning as an anti-tank gun - a role for which it was capable though at the expense of taking it away from its main artillery role. The evolution of German tank design meant anti-armour performance of the 2-pdr gradually became insufficient, however the gun owes large part of the bad reputation it gained during the campaign to the open terrain (which made the high-silhouette piece hard to conceal) and to less than perfect tactics.

Further, in North Africa it was found that towing the 2 pounder long distances across rough, stony deserts damaged the weapon. Starting in 1941, the British developed the "en portee" method of mounting the 2 pounder (and later its successor, the 6 pounder) on a truck. Though only intended as a carrying method, with the gun being unloaded for firing, crews tended to fire their weapons from their vehicles for more mobility, with consequent casualties. Hence the vehicles tended to reverse into action so that the gunshield of the 2-pdr would provide a measure of protection against enemy fire.[2]

From mid-1942, the 2-pdr was increasingly displaced to infantry anti-tank platoons, to the Home Guard units in Great Britain and to the Far East, where it was still effective against the smaller and more lightly armored Japanese tanks. It was finally removed from service entirely in December 1945. As a vehicle weapon it remained in use throughout the war. Although most tanks models equipped with it were withdrawn or upgraded to the 6-pdr, it remained in use with armoured cars.

Its performance as an anti-armour weapon was improved later in the war with the development of more sophisticated ammunition and got an additional boost with the introduction of the Littlejohn adaptor, which converted it to squeeze-bore design firing specially-designed shells at much higher velocities. (However, the Littlejohn adaptor also prevented the use of High Explosive rounds.) These improvements, however, were constantly outpaced by improvements in tank design.

The guns were never equipped with High Explosive rounds which would have given the gun some capability against un-armoured targets, although the rounds had been produced. The shells were not introduced, however, because it was felt that the tiny amount of explosive contained in such a relatively small shell would be ineffective. This proved to be a problem in combat when duels would break out between opposing anti-tank gun units. It also presented a major problem for armoured vehicles equipped with the gun, which were equally limited in dealing with opposing anti-tank guns (and their crews) at distances beyond the range of their machine gun.