In the 1950s, the German Democratic Republic (GDR) began broadcasting its Deutschlandsender station on longwave. In response to this, the then-Nordwestdeutscher Rundfunk applied for a licence to operate a similar longwave service on behalf of the ARD. This was granted in 1956 and operated as Deutscher Langwellensender ("German Longwave Station").

When Norddeutscher Rundfunk's licence to broadcasting on longwave expired, the federal government acquired the frequencies for Deutschlandfunk and began transmissions on 1 January 1962, joining the ARD on 7 June.

Deutschlandfunk broadcast primarily in German, targeting the GDR and German-speaking minorities in Eastern Europe. However, its European Department was responsible for foreign-language transmissions to neighbouring countries in Europe, primarily from the Ehndorf transmitter. From 7 June 1963 it began foreign language transmissions in Czech, Croatian, Polish and Serbian. Later it focused on the Federal Republic's free neighbours in northern Europe, including English programming for the UK and the Republic of Ireland. Inter-continental broadcasts were the responsibility of Deutsche Welle. 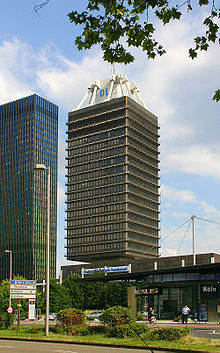 After reunification, negotiations between the states and the Federal Government led to a reorganization of Germany's national and international public broadcasters in which DLF lost its independence and ARD membership.

On 1 July 1993, DLF's European Department was transferred to Deutsche Welle. DLF English programmes were phased out over several years and replaced by DW's intercontinental programmes.

The rest of DLF was merged into Deutschlandradio ("Germany Radio"), a public broadcasting institution created to oversee national services, from 1 January 1994. DLF was given a new remit as a news and current affairs service, while retaining its staff and studio facilities in Cologne. The service remains free of advertising. In the years immediately after the merger it was sometimes referred to as DeutschlandRadio Köln ("Germany Radio Cologne").

Deutschlandfunk's schedules are largely made up of news and documentaries, covering politics, economics and science. There is also some very limited music output.

Deutschlandfunk broadcasts a news bulletin, usually lasting five to ten minutes, on every full hour without exception. From early morning to early evening German time, there is also a shorter bulletin on the half hour.

On Sundays, a discussion programme is broadcast between 0930 and 1000, covering subjects as varied as Islam in Germany, neurophysiology and the history of art. These discussions are archived on the internet [1]. 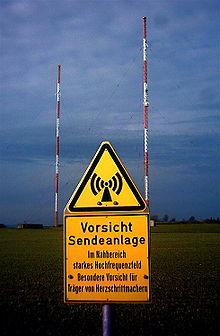 Until November 23, 1978 (until the Geneva Frequency Plan of 1975 came into effect), Deutschlandfunk was transmitted on longwave from Sender Donebach and on mediumwave from Bad Dürrheim, Cremlingen, Ravensburg, Ehndorf and Mainflingen. With the validation of waveplan of Geneva Bad Dürrheim was shut down. In 1979 new transmitters went into service: in Erching for daytime long-wave transmission and in 1980/81 in Nordkirchen and Thurnau for medium-wave transmission.

Thanks to these transmitters, Deutschlandfunk's signal reaches most of Europe during the hours of darkness. The long-wave transmission can also be heard in much of Europe during day and night, including parts of Great Britain. With the exception of Heusweiler, the transmitters are owned by Deutsche Telekom AG.

FM transmitters carry the Deutschlandfunk signal throughout Germany, but there are leaks in the coverage pattern, especially — but not only — in the southern states of Bavaria and Baden-Württemberg. As AM radio reception is practically out of use in Germany, FM coverage is vital for Deutschlandfunk. As the state authorities have the power to allocate frequencies to broadcasters, they prefer "their" regional public and commercial broadcasters which are controlled and regulated by them.