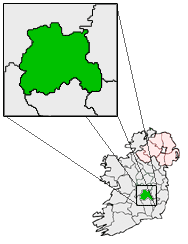 Ballylinan or Ballylynan ("Baile Uí Laigheanáin" in Irish) is a on the / border in the Ireland. The name means "Lynan's town", though exactly who Lynan was is now forgotten.

Ballylinan is mainly a farmland area with no real industrialisation, although the building of many new housing developments has changed the area dramatically and increased its population. These developments, some still currently under construction, include "Rahin Wood", "The Village", "White Thorn Grove", "Cottage Gates", and "Gracefield Manor".

The village has a number of shops, a church, a Garda (police) station, school, garage, and five pubs, the most noted of which is "The Horse and Coach". All of these establishments are on the one road: the N78.

Ballylinan has a traditional history of excellence in football (see ).

Ballylinan is also host to Ireland's annual metalfest, Day of Darkness, which takes place for two days every year in July. This year's festivities featured such bands as Entombed and Candlemass, as well as Ireland's own Mael Mordha and Cruachan.

A railway line linking Ballylinan to the nearby town of operated between 1918 and 1963. The line was a freight only service, carrying slate, coal, sugar beet, and occasionally livestock. Some of the trackbed still exists around the Athy area.