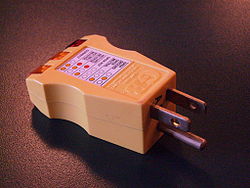 A receptacle tester or outlet tester is a device used to verify that an AC wall outlet is wired properly. The tester itself is small device which looks like the "plug in" end of a power cord, with several lights on it rather than an attached cord. Although a multimeter could be used to perform a series of tests which would give the same results, an outlet tester can perform the entire array of tests by simply plugging the device into the outlet once and observing the state of the lights. The tester performs several tests at once but the tests themselves essentially fall into two categories: tests which determine that the outlet actually functions and tests which determine that the outlet is properly wired for safe operation. 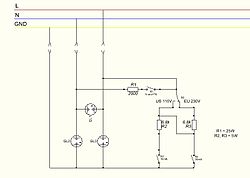 The most basic job of the outlet tester is to verify that the outlet actually provides power to a device plugged into it. In order for an AC outlet to be functional it must have, at a minimum, a live or "hot" connection to a varying electrical voltage, and a neutral connection to complete the circuit. If either of these is not hooked up, or is damaged in some way, then the outlet will not function at all. The voltage between these two connectors also needs to fall within a certain range for proper operation, however many outlet testers only check for the presence of voltage across the proper connectors, not the actual level of voltage, which can easily be checked with a multimeter. 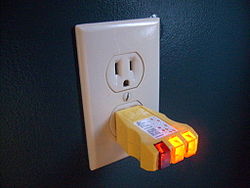 A receptacle tester being used to verify the proper wiring of an outlet. For this particular tester, proper wiring is indicated by the two yellow lights.

The much more important role of the outlet tester is to not only verify that electricity is present in the outlet but that the outlet is properly wired, with each plug being connected to the proper wire in the building's wiring. There are two primary reasons for testing this. First, some devices must have a specific prong connected to the live connection or damage to the device could result. Second, and more importantly, if the live wire is connected but the neutral or ground wire is not, a dangerous situation could be created by preventing safety mechanisms from operating properly. Furthermore the ground wire is typically attached to the case of an electrical device as a safety precaution to carry away current if the insulation on the wires is damaged and the case becomes charged. Although this is an important safety feature on many devices, if the outlet is improperly wired with the ground plug connected to the live wire the safety mechanism has the opposite effect and charges the outside of the device creating the potential for an electric shock for anyone touching the device.

Note also that simple three light testers cannot detect two potentially serious house wiring errors: (1) neutral and ground reversed at the receptacle. (2) a "bootleg" ground, where the neutral and ground pins have been connected together at the receptacle. (Done by someone to attempt to fool the three light tester, typically if 3-prong outlets have been retrofitted to an old house with only two physical wires in the conduit.)

However by using the receptacle tester first, then a multimeter, the these two errors can be detected: With the meter, look for low (but not zero) resistance and volts between neutral and ground. (Zero ohms is a sure sign of a bootleg job.) For the neutral-ground reversal test, next put some load on the same outlet circuit (e.g. a 100w incandescent lamp plugged into the other socket of the outlet), the meter should show a higher voltage between hot and ground, than between hot and neutral. This is because of the voltage drop due to the load. If it is the reverse situation, then you likely have a receptacle with neutral and ground reversed.