The Port Phillip Channel Deepening Project (CDP) began on 8 February 2008 to deepen the shipping channels leading to Melbourne, Australia, in Port Phillip to 14 metres (46 ft) draught allow greater access for container ships. An estimated A$969 million, was to be spent on the works, with $150 million funded by taxpayers.[1] The dredging works were conducted by Dutch company Royal Boskalis Westminster for the Port of Melbourne Corporation (PoMC), a statutory body established by the Victorian Government responsible for the running of the port, at a cost of $500 million and was expected to be completed before 31 December 2009, pending auditor reports and various legal actions against the project. The project was to be conducted under a controversial Public-Private-Partnership.

Operating almost 24 hours a day, the project involved the removal of approximately 22.9 million m3 (810 million cu ft) of sand, fine river silt (including about around 3 million m3 (110 million cu ft) of contaminated sediment) or approximately 1% of the bay by area, assuming the bay has only two dimensions. The material removed was transported to designated "dump sites". According to environmental groups[who?], the dredging would disturb marine plant, animal and microbial life through large areas of the bay.[citation needed]

The project has caused minor controversy among a small minority of the Victorian population. The small community group Blue Wedges held public rallies and several pickets from 2004–2008, involving surfers, canoes, kayaks, boats and yachts who put themselves in the path of the dredging ship Queen of the Netherlands, delaying the project for a short time. The project eventually began, although under limited conditions, after Blue Wedges won a reprieve in the Federal Court. The limited conditions were stripped from 28 March 2008 after ensuing legal proceedings saw the Blue Wedges case dismissed. Legal costs were pursued by the state government.

In 2009 the Victorian Auditor-General's report was released[citation needed]. The Auditor-General sourced information on what percentage of ships could and could not enter the bay, from the Port of Melbourne exclusively, who had twice previously overestimated the number of ships that could not enter the bay prior to dredging. In addition, almost all of the shipping companies that use Melbourne's ports stated that there was no need for dredging or channel deepening in the bay or around the ports[citation needed].

The government announced the completion of works in November 2009, ahead of schedule and $200 million under budget.[2]

Prior to the completion of the works, ships entering the Port of Melbourne were restricted to 11.6 m (38.1 ft) draught (12.1 m (40 ft) at high tide). Larger container ships instead need 14 m (46 ft) to carry full loads. The PoMC estimated that in the 2006-07 financial year, 38.5% of ships visiting the port were already potentially affected by draught limitations because the channel did not allow for the extra depth, with this figure rising to 44.3% in the December quarter of 2007.[3] The key objective of the Channel Deepening Project was to address these draught restrictions. 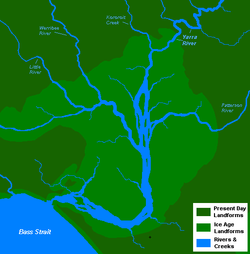 The course of the Yarra River around 10,000 years ago, after the end of the last Ice Age, prior to the creation of Port Phillip.

The PoMC has specified four project 'areas' of the bay to be completed progressively.

The second area to be dredged, dredging was expected to begin in this area but was delayed after a court injunction, with dredging instead beginning in the south of the bay.

The first area to be dredged under limited conditions specified in a court injunction.

The Entrance was argued to be one of the more sensitive areas of Port Phillip Bay to be dredged, after a rockfall incident that occurred during trial dredging in 2005. 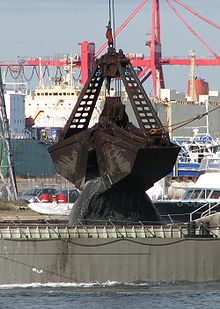 Dredged material from the Yarra River being deposited by a grab dredge on to a barge.

Materials dredged in Port Phillip were disposed of in two areas.[3]

Uncontaminated dredged material from the Port Melbourne, Williamstown and Yarra River channels was disposed of in the existing Port of Melbourne Dredge Material Ground (DMG), which covers an area of about 9.36 km2 (3.61 sq mi) (or approximately 0.48% of the total bay area). The site was expected to be extended to the south by an area of 2.7 km2 (1.0 sq mi) (or approximately 0.14% of the bay) to accommodate the dredged material volumes as a result of the dredging project as well as to accommodate dredged material volumes from future maintenance dredging.

Uncontaminated dredged material from the South Channel and the Great Ship Channel was to be disposed of in a dredged material ground yet to be built in the south east part of the bay, expected to cover an area of 7.68 km2 (2.97 sq mi) (or approximately 0.39% of the bay area).

Those materials which are contaminated were to be stored in an underwater clay containment area known as a ‘bund’ at the existing Port of Melbourne DMG, and capped with clean dredged sand.

A new, risk-based approach to setting limits on turbidity so as to protect seagrasses in the southern regions of the Bay was developed by Environmetrics Australia. Six-hourly Exponentially Weighted Moving Average (EWMA) control charts and 2-week moving average control charts were also developed by Environmetrics Australia. These calculation tools provide, respectively, an early warning capability and an assessment of the likelihood that minimum light requirements for seagrasses will be maintained.[citation needed]

The use of a robust monitoring tool in providing accurate and timely information was an important aspect to the project. SRA Information Technology provided its EnviroSys software as the tool whereby turbidity monitoring and vessel tracking could occur in real time. Early warning alerts could be generated by the monitoring tool to inform when predefined exceedance levels had been triggered.

Cooperating with the Environment Effects Act 1978,[4] the PoMC released its Environmental Effects Statement (EES), a report on the environmental, economic and social impacts of the channel deepening project, on 5 July 2004.[5] The EES was available for public viewing until 16 August 2004 and an independent panel sat from 21 September to 17 December 2004 to hear submissions and consider the environmental effects and issues raised in the EES. In February 2005, the independent panel released their report on the EES, presenting 137 key aspects of the EES which needed building on. These included further examination of channel deepening designs; investigation of dredging technology; investigation of best methods of sediment disposal, and examination of turbidity.[6][7] The panel's recommendations led to the Trial Dredge Program (TDP) that took place from 6 August 2005.

Consequently, on 31 March 2005, the then Minister for Planning Rob Hulls announced that the PoMC would be required to carry out a Supplementary Environmental Effects Statement (SEES) to further investigate the environmental impact of the dredging project and address its shortcomings. Hulls said the SEES would "build upon the EES process to date" and would be "based upon the key areas outlined by the panel and allow for further expert analysis".[6] On 21 March 2007[8] the PoMC released its Supplementary Environment Effects Statement (SEES) for public viewing until 7 May.

The EES and the SEES culminated in the Environmental Management Plan (EMP), a report prepared by the PoMC consisting of "regulatory controls, environmental controls, project delivery standards and environmental monitoring" for the channel deepening project.[9] On 5 February 2008, Environment Minister Peter Garret approved of the EMP.

The Queen of the Netherlands docked at the Port 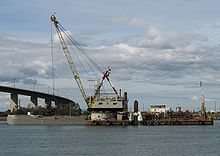 Goomai and barge Resolution during dredging operations on the Yarra River.

The principal concern of the project lies in its potential for severe long-term environmental consequences. On this front, major opposition to the project has come from the community group Blue Wedges, a coalition of over 65 environmental groups, which legally challenged the PoMC and the Victorian Government and was subsequently forced into bankruptcy due to the pursuit of legal costs by the state government[citation needed].

During trial dredging in 2005, a rockfall incident occurred in an area of The Heads known as the Canyon, which caused some of the rock in this area to scour and disintegrate. The scouring is presently continuing, with controversy stemming from undocumented instability of the rock formation by the PoMC to predict its behaviour in the future. Much of the Port Phillip heads falls under the Port Phillip Heads Marine National Park due to its significant marine diversity and marine geological formations.[citation needed]

Also, the $500 million cost of the actual dredging work carried out by Royal Boskalis Westminster was claimed to have been kept secret by the Victorian Government and the PoMC, who entered into alliance with Royal Boskalis Westminster in 2004, for at least for 3 years. Under Victorian legislation passed in 2000, all contracts worth more than $10 million must be published - the cost of the dredging was above this at the time, yet details were not released.[38]

The PoMC estimates that the direct economic benefits as a result of the dredging are $2 billion.[3] However, a study commissioned by the Australian Conservation Foundation (carried out by Melbourne-based firm Economists at Large) raised questions about the economic benefits of the project. The study reported that the basis upon which the economic benefits were originally calculated had drastically changed, with given rising costs and legal proceedings, concluding it was no longer economicallly viable:[39]